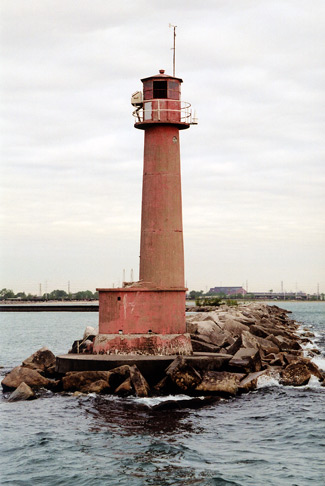 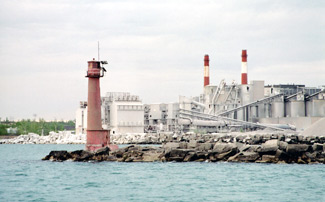 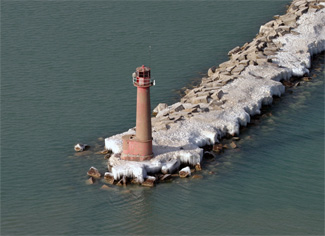 At the turn of the twentieth century, the southern shore of Lake Michigan, encompassing Chicago and Indianas shoreline, was the site of major industrial development. Steel mills, including the large plant and port at Gary, Indiana, were built to take advantage of the iron ore found abundantly along the shores of Lake Superior. Mountains of slag, the waste left after the melting of ores, were produced by the steel mills. The slag could be put to good use by combining it with limestone to produce Portland cement. A large deposit of limestone existed near Rogers City, Michigan on Lake Huron, but no natural harbor was to be found in the area. Carl Bradley led the effort to build an artificial harbor and extract the limestone, and soon the Bradley Transportation Company, a U.S. Steel subsidiary, was shipping limestone from the quarry in large freighters.

Utilizing steel slag from the Illinois Steel Companys mills in South Chicago and limestone from Rogers City, the Cement Department of the Illinois Steel Company, a subsidiary of U.S. Steel, opened its No. 3 Mill, known as the Buffington Plant, in November 1904. The firms previous two mills were operating in Chicago and South Chicago. Due to a continual rise in demand for cement, work on the No. 4 Mill, also located at Buffington, was begun in 1906. To focus on the market for Portland cement, the Cement Department of the Illinois Steel Company was spun off as a separate company called the Universal Portland Cement Company. A third mill, Mill No. 6, was completed at the site in 1912, and the Buffington cement plant became the worlds largest with a daily output of 23,000 barrels of cement.

To facilitate the transportation of goods to and from the plant, a fifty-five-acre harbor basin was built at the cost of three million dollars. On June 10, 1927, Buffington Harbor, then the deepest and most modern port on Lake Michigan, opened with much fanfare. On hand for the event, was Charles G. Dawes, Vice-President of the United States, who raised a U.S. and a Buffington Harbor flag to officially open the port. Two freighters, the E.J. Buffington and the T.W. Robinson, named respectively for the president and vice-president of the Illinois Steel Company, were also in the harbor that day. The freighters could tie up at an 1,800-foot dock, and then offload their cargo into the storage yard with the assistance of a traveling bridge carrying a ten-ton bucket. An electric conveyor nearly a mile long carried material from the dock to the plant at a rate of six tons a minute.

Buffington Harbor is protected on the west by a 2,000-foot pier, while a 1,200-foot breakwater extends east from the end of the pier. At the extremity of the breakwater is Buffington Harbor Breakwater Lighthouse, built appropriately of concrete and visible for thirteen miles. The lighthouse has a focal plane of forty-eight feet and exhibits a red light.

In 1930, Universal Portland Cement Company and Atlas Cement Companies merged to become Universal Atlas Cement Company. The 1930s, the depression years, were hard on the cement industry, as demand fell by nearly a third. In 1980, Lehigh Cement Company purchased the Universal Atlas Cement Division of U.S. Steel, and the Buffington Plant was included in that deal. In 1995, one-third of the Buffington property was sold to entrepreneurs, Donald Trump and Donald Barden, for $13.5 million. The two placed a pair of gambling boats, the Majestic Star and Trump Casino in the harbor. Lehigh Cement sold the remaining portion of its Buffington Plant on September 14, 2000 to the City of Gary for $25 million. The majority of the property has been transferred to Gary New Century, a private development company that plans to build a residential, retail, and recreational complex on the site of the cement plant.

For a larger map of Buffington Harbor Breakwater Lighthouse, click the lighthouse in the above map.

The lighthouse is owned by the City of Gary. Tower closed.