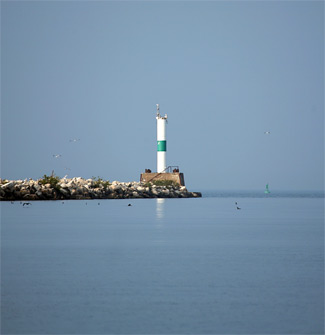 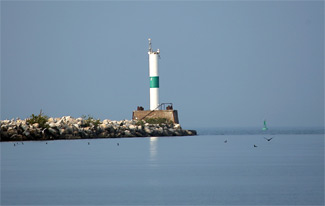 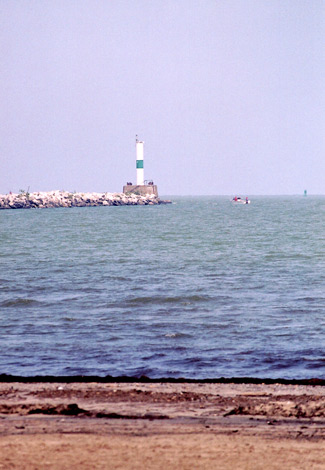 On May 28, 1924, Congress appropriated $50,000 for improving navigational aids for entering Sandusky Bay. A reinforced concrete powerhouse was built on Cedar Point in 1925 to house two, thirty-four-horsepower oil engine generators for supplying electricity to five lights in the area. In 1926, the four frame structures that served as the inner and outer range lights were razed and steel, skeletal towers were erected in their place. Submarine cables were laid from cedar point to the four range lights, and the new electrified lights went into service on November 15, 1927. A brick veneer double dwelling was completed at Cedar Point in 1927 to house the keepers of the lights.

While electrifying the four range lights was an improvement, the real boon for mariners was the establishment of a new light and fog signal at the end of a jetty extending into the bay from Cedar Point. The nearly 5,000-foot-long jetty was completed in 1914, but it remained unmarked waiting the necessary appropriation. After $50,000 was provided in 1924, a concrete foundation was built at the outer end of the jetty and a steel tower, fabricated at the lighthouse depot in Buffalo, was erected thereon in 1925.

A temporary acetylene light was displayed from the tower until a permanent light was established atop the tower on March 15, 1928 with the following characteristic: white light for four seconds, eclipse for two seconds. The light, known officially as Sandusky Pierhead Light, had a focal plane of sixty-six feet and could be seen for up to fifteen miles. An air diaphone foghorn, which sounded a three-second blast every thirty seconds, was commissioned on June 1, 1928. Like the inner and outer range lights, the pierhead light was powered by a submarine cable and remotely controlled from Cedar Point.

The original Sandusky Pierhead Lighthouse consisted of a twenty-foot-tall skeletal steel tower supporting a square steel lantern room surrounded by a narrow walkway. The light was exhibited through a square window facing the entrance to Sandusky Bay.

Although hardly worthy of a postcard, the light tower did make the news during the summer of 1933. On July 2 of that year, more than 100 men were enjoying themselves fishing along the jetty when a sudden northeaster sent them scrambling for shelter. The native Sanduskians headed for shore, but a group of ten Clevelanders sought refuge in the lantern room at the outer end of the jetty. What they didnt know was that the structure was both unmanned and locked, and soon the rising water swept away any hope of retreat. As the waves reached almost forty feet, the men were forced to cling to the steel supports to keep from drowning. No rescue boat could brave the violent storm, leaving the men stranded for the rest of the day and all through the subsequent night. The fishermen clung tenaciously to the tower for their lives, as the waves incessantly battered them and the temperature steadily dropped.

The oldest man in the group, John Chappel, told of the fishermens efforts to stay awake and alive. It was awful cold. We were standing with our feet on the concrete base of the structure and our arms wrapped in the steel support. There was just about room for us. My son was with me, and all night I had to see that he kept awake. That is what we all had to watch. As soon as somebody got looking as if he would go to sleep we jabbed him in the ribs. We had to do it. It was awful cold.

Aaron Fisher, one of the younger ones, related, I got sleepy and I knew what would happen if I let go. So I started singing. I sang all night long. Finally my voice sounded like a fog horn, but I kept on singing. I found that every time I stopped singing I got cold.

By the next morning, a Coast Guard boat maneuvered close enough to shoot a line to the men with the key to the lighthouse attached. The fishermen quickly pulled in the line, unfastened the key, and unlocked the door to the structure. Once safely inside, the men lit a lantern and used the towers private phone line to communicate with a keeper on the mainland. Around 11:00 a.m., the lighthouse keepers wife, ElsieWaibel, called to check on the men and learned they were quite hungry. Soon, the trusty Coast Guard shot another line to the tower, this time attached to a waterproof can full of sandwiches.

The storm slowly weakened during the day, and that afternoon the Coast Guard rescued the group and returned them to shore where they were reunited with their families.

The small, square light tower continued to mark the entrance to Sandusky Bay, growing older and rustier in the process, until it was replaced with the current tower in the mid-1990s.

For a larger map of Sandusky Harbor Breakwater Lighthouse, click the lighthouse in the above map.

Sandusky Breakwater Lighthouse can be viewed from Cedar Point Amusement Park. To reach the park, take Ohio Turnpike (I-80) to Exit 118 (US 250), and follow the signs north, or take Exit 110 (SR 4) and follow Route 4 north. Once in Sandusky, follow the signs for the park.

The light can also be seen from Jet Express ferries to Put-in-Bay and Kellys Island that operate out of Sandusky.