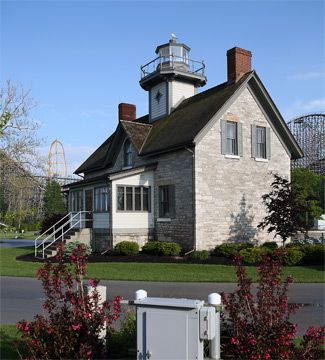 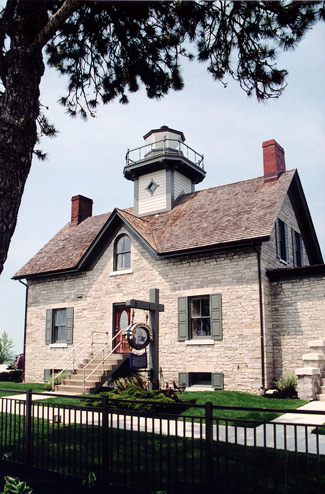 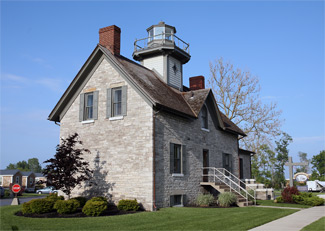 Today, Cedar Point is known for its undulating skyline consisting of some of the tallest and fastest roller coasters in the world. To provide room for expansion, Cedar Point Amusement Park acquired the northwest corner of the peninsula on October 28, 1987 for $425,000. Among the abandoned structures on this former Coast Guard property was the historic Cedar Point Lighthouse. The dilapidated lighthouse, minus its tower and lantern room, could have easily fallen to the blade of a bulldozer, but park planners envisioned the restored lighthouse as the centerpiece of a collection of park cottages and cabins resembling a nautical New England town. The vision became reality, when Lighthouse Point accepted its first visitors in 2001. The Ohio area was opened to European settlers after American commander Mad Anthony Wayne had subdued the Mohawk and the Six Nations Indians and compelled the chieftains to sign the Treaty of Greenville in August 1795. In the century before Waynes arrival in the region, the Erie Nation and the Niagara Indians had already been rendered extinct at the hands of the Iroquois Confederation. The British and Americans ended their extended struggle for the Great Lakes in 1818 with the signing of the Rush-Bagot Agreement, which limited military vessels on the waters. Following a century of bloody conflicts, an era of booming trade commenced in the region.

Lake Erie was thus transformed from a stage of maritime battles into a hub of rapidly growing commerce. Storms and boiler explosions did not deter vessels from crossing Lake Erie, and maritime traffic steadily increased in the 1820s and 1830s. In 1820 there were 120 steamers carrying cargo and immigrants on the lake, and by 1831 there were over 2,000.

Many lives were being lost on Lake Erie, which was famous for its darkness, sudden gales, mist and fog, and general capriciousness. Ravaged by stormy nights, delays, and frequent losses, a group of leading citizens and shipowners petitioned Congress Committee on Commerce for the construction of a beacon light at Cedar Point. It was 1832, and every other Ohio harbor on Lake Erie, east of Black River, had already been accommodated with beacon lights. After multiple petitions, Congress finally allocated $2,500 for a beacon light on March 3, 1837, and added another $3,000 on July 7, 1838 for finishing the structure.

In 1837, Lieutenant G. J. Pendergrast, appointed by the Board of Navy Commissioners to examine the eligibility of proposed lighthouses on the Great Lakes, confirmed that a light was needed on Cedar Point to mark the entrance to Sandusky Bay, and the following year, Lieutenant Charles T. Platt provided more details on the planned light:

It is contemplated placing the lantern on the building in which the tender is to residea plan always commendable when the locality of the light will allow. I find, on examining this point, that the lake is making fearful inroads upon the shore; and, to prevent future calamitous consequences, I deem it essentially important that cribwork, filled with stone, be extended from the Hog's-back (so called) to the extreme point of the cape, a distance of about 150 feet. When this is completed, the waves will soon overlay it with sand, and thus afford permanent protection to the intended site of the beacon. The expense attending the construction of cribwork, four feet in width and three in height, will be but trifling, as the whole would not exceed $500.

It is believed that the present appropriation of $3,000 will be sufficient to defray all the cost of the dwelling, necessary out-buildings, and cribwork. This was certainly the opinion of Mr. Starkweather, the collector at Cleveland, in whom the contracting power is vested. The utility of this light in entering the bay has doubtless been fully represented; and I will only observe, that the most favorable report with regard to it meets my full concurrence.

The resulting light on Cedar Point was built in 1839 and marked the eastern approach to Sandusky Bay. Marblehead Lighthouse, which had already been built in 1822, stood on the western edge of the bay. Cedar Point Lighthouse consisted of a rectangular stone dwelling, with stepped gables on each of its two shorter sides and an octagonal tower extending upwards from the center of its peaked roof. The height from the group to the top of the lighthouse was just over twenty-eight feet. A patent signal lantern was placed on Cedar Point in 1849 to range with Cedar Point Lighthouse, and this was replaced in 1853 by another front range beacon, situated 265 feet north of the lighthouse. The 1853 framework structure, located at the waters edge, stood sixteen feet tall and was equipped with pulleys for raising a lantern to its top. The framework was placed on slides so the keeper could move it as required by the shifting channel.

In 1862, work began on the erection of a larger limestone lighthouse, some ten feet taller than the old stone lighthouse. Though both lighthouses consisted of a one-and-a-half-story dwelling with a lantern centered on its roof, the 1862 lighthouse had a square tower, instead of an octagonal one, and featured cross-gables above the main door and on the opposite side. The lantern room and lens from the 1839 lighthouse were transferred to the new structure.

A third front range light, a more permanent structure, was built in 1867. Cribwork was placed on a shoal in five feet of water, and atop this was constructed a frame dwelling surmounted by a sixth-order light. In 1891, the Lighthouse Board reported that the crib was decayed causing the frame building to settle unevenly. A contract was made for an iron tower to replace the building, but the Board later decided to drive a row of piles around the cribwork to shore up the foundation.

Besides the range lights at Cedar Point, there were other ranges to help mariners enter Sandusky Bay. In 1878, three beacon lights were completed on piers to mark an elbow in the entrance channel. The main beacon consisted of a dwelling and light, while the north beacon and west beacon, which were both eventually connected to the main beacon by footbridges, consisted of a hollow iron shaft through which a range light was hoisted. These Sandusky Bay Range Beacons were in operation until a new set of range lights was established in 1896 to mark the recently dredged Straight Channel.

Lighthouse keeper Frank Ritter, his wife and two children, Elsie and Lewis, moved into the dwelling at Sandusky Bay Inner Front Range Light in 1896, and Ritter was also responsible for the associated rear light. By this time, the Ritters were veterans of the area, as they had previously taken charge of the Sandusky Bar Range Beacons located off Johnsons Island. The dwelling on the front pier served as the familys home from the opening of navigation around March 1st until shortly before Christmas each year.

Ritter is credited with saving numerous lives, although he was not quite sure of exactly how many he plucked from the water. Nightly, Frank and his wife sat side by side, gazing through a window into the distance, while winds often raged and waves stirred the lake. Many a time, they detected distress flares. Rescue operations were no easy task because there were no telecommunications between the lighthouse and the life-saving station, so Ritter had to row to Marblehead station to alert the lifesavers. On one occasion, thirty to forty men and one woman were rescued from two endangered boats. Other examples of Ritters rescues include the following:

One day, after lighting a range light, Ritter himself needed to be rescued. His boat was upset by a northeaster, spilling both him and his dog into the water. Luckily, people on shore heard his calls for help. Ritter was saved, but his dog later washed up dead on Cedar Point.

Both lights in Cedar Point Range were discontinued in 1904, leaving just the outer and inner ranges to guide mariners into Sandusky Bay. After its light was deactivated, Cedar Point Lighthouse lost its tower and lantern room. In July 1910, fireworks shot from the steamer Eastland as she departed Sandusky for Cleveland started a fire that destroyed the old Cedar Point Front Range Light.

On May 28, 1924, Congress appropriated $50,000 to build a modern light on a jetty extending from Cedar Point and to electrify the outer and inner ranges. The four wooden range lights were replaced with skeletal, steel towers, and submarine cables were run from the cribs to a concrete power house on Cedar Point equipped with two oil engine generators. A brick veneer double dwelling was also built at Cedar Point for the keepers responsible for the lights. The electrified range lights entered service on November 15, 1927. Here are photographs of the new inner front light and rear light.

Frank Ritter moved to Cedar Point and continued as keeper until July 1, 1929. Ritters son-in-law Henry Waibel succeeded him and served until 1948. The Coast Guard continued to use Cedar Point Lighthouse and the surrounding area as a buoy depot, a radiobeacon station (established April 19, 1932), and finally a search and rescue boat station. In 1975, Cedar Points boat station duties were transferred to Marblehead Coast Guard Station, and the property went unused until being acquired by Cedar Point Amusement Park in 1987.

Located in Lighthouse Point a collection of lakeside cottages at the northern end of Cedar Point, a peninsula near Sandusky.


For a larger map of Cedar Point Lighthouse, click the lighthouse in the above map.

To reach Cedar Point Amusement Park, take Ohio Turnpike (I-80) to Exit 118 (US 250), and follow the signs north, or take Exit 110 (SR 4) and follow Route 4 north. Once in Sandusky, follow the signs for the park. After paying for parking, follow the road to the left and drive around the back end of the amusement park to get to Lighthouse Point.


A great way to see Cedar Point Lighthouse is to book a night's stay in one of the Lighthouse Point cottages located along the waterfront near the lighthouse. You don't have to visit the amusement park to spend the night. The price to stay in a cottage may be a bit extravagant, especially if you don't fill up the place with six people and you don't plan on taking advantage of the early entrance into the amusement park offered to guests, but the views of the Marblehead Peninsula from your private deck and of the lighthouse from your bedroom window make it worth the cost.