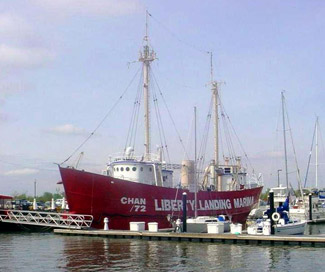 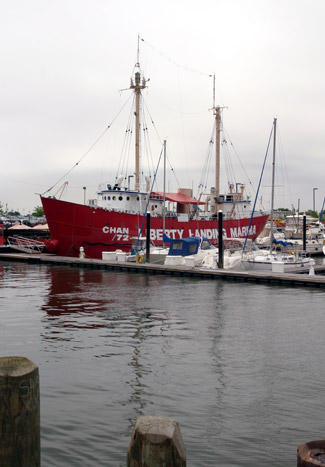 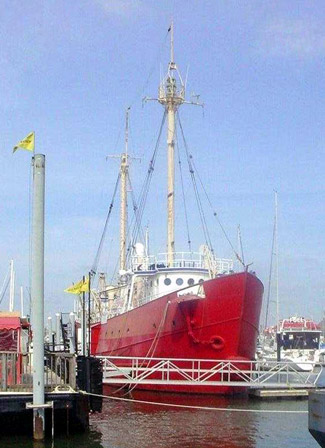 Lightships were typically painted red with their stations name emblazoned in large, white block letters on both of her sides. LV 107/WAL 529 still complies with this standard. Its current markings LIBERTY LANDING MARINA do accurately describe its latest location, though the marina was obviously never an official lightship station.

After LV 107 was decommissioned in 1968, it was relocated to Hampton, Virginia to be used as a museum. This venture must not have lasted too long, as by 1984 the lightship was at North American Metals ship-breakers yard in Bordentown, New Jersey. Fortunately, the lightship was rescued by its present owners and relocated to Liberty Landing Marina, where it has operated as Lightship Bar and Grill, a yacht sales office, and a sailing school.

The lightship was built by Bath Iron Works of Bath, Maine in 1923, and its first station was Cape Lookout Shoals, North Carolina, where it served from 1924 to 1933, when the station was discontinued and replaced with the Cape Lookout Bell Buoy.

A hurricane struck the station on September 17 and 18 of 1936. The powerful storm drug LV 107 and its bulbous mushroom anchor off station, stove in a section on the ships starboard side, broke loose generators and storage batteries from their mountings, and demolished the vessels motor boat. Still, the lightship was able to regain its station and resume service on September 19.

In 1942, LV 107 was pulled from its station and used as an examination vessel during the remainder of World War II. The lightship returned to Winter Quarter Shoal following the war and remained there through 1960 when it was replaced by a lighted bell buoy.

LV 107s next station was at the newly created Delaware station, southeast of the entrance to Delaware Bay and seventeen miles from Fenwick Island Lighthouse. The lightship served at this station for five years, before being assigned as a relief lightship out of Cape May in 1965. Gary Day was Commanding Officer of the lightship from 1967 until her decommissioning in 1968. During his eighteen months at the helm, the vessel served as relief at the Ambrose, Barnegat, Five Fathom, and Delaware stations. According to Day, Delaware was the worst, flies would eat you alive in summer. At chow time we covered all the food with clean rags and sprayed BUG-A-BYE in the air vents to get rid of them. During calm weather we rolled a lot because the current from the Delaware River would hold us broadside to the swells. Finally, we figured out how to moor by securing a mooring line to the anchor chain by use of a pelican hook. We could then secure the mooring line to a bit amidships and we would stem the swells. Made for a much more comfortable ride.

After the lightship was decommissioned, Commander Day spotted her at Newport News. He recalls, Someone had painted a white and blue stripe around the hull at deck level. People there did not like it when I told them they should not have done it, but it may have been the way I put it to them. LV 107 has her proper colors back now, and is a good place to eat a burger while admiring the Manhattan skyline.

For a larger map of Lightship Winter Quarter LV 107/WAL 529 Lighthouse, click the lighthouse in the above map.

From the New Jersey Turnpike (I-78) exit at 14B or 14C. For Exit 14B, travel under the turnpike and go ¾ the way around the first traffic circle and onto Philips Drive. Continue on, passing Liberty Science Center and proceed to the end of the road. Turn right onto Audrey Zapp Drive and continue ¼ mile to Liberty Landing Marina parking lot. For exit 14C, immediately after the toll booth and at the bottom of the ramp, go right one block, then turn left and proceed to the T-intersection, turning right onto Audrey Zapp Drive. Travel ¼ mile to Liberty Landing Marina parking lot on the left.

The lightship is owned by Liberty Landing Marina. Grounds open, lightship to customers.