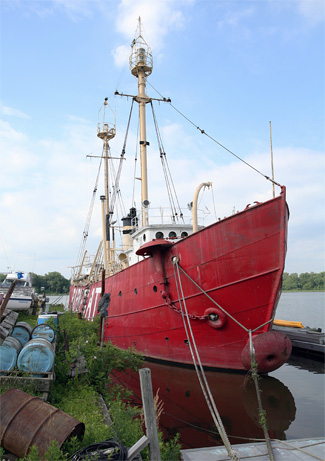 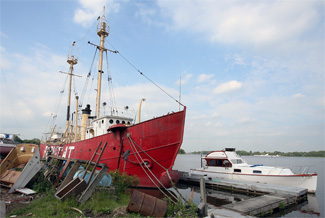 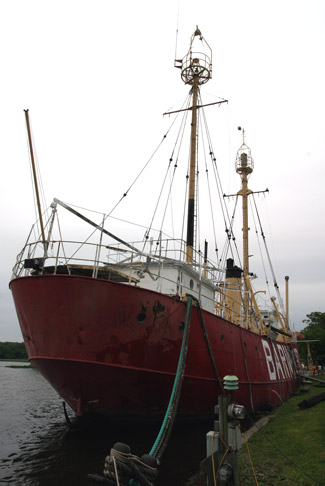 A lighthouse was first built at the northern tip of Long Beach Island, marking Barnegat Inlet, in 1835. This forty-foot-tall tower toppled into the sea in 1857, and a temporary light was put in place until a new lighthouse, built south of the original, was completed in 1858. This lighthouse stands 172-feet-tall and originally exhibited the light from a revolving first-order Fresnel lens. Destructive storms during the winter of 1919-1920 brought the high water mark 275 closer to Barnegat Lighthouse Barnegat Lighthouse, and the keepers triplex at the base of the tower had to be abandoned. The lighthouse was turned over to the state of New Jersey in April 1926, and a lightship was established offshore from the inlet on August 15, 1927. The lighthouse was reduced to a minor light and then discontinued in 1944.

The most important new aid to navigation provided in many years on the Atlantic coast of the United States is announced by the Department of Commerce. About August 15 a lightship will be established on a new station about 9 miles east from Barnegat Lighthouse. This vessel will have an occulting white light showing 8 seconds out of every 10 seconds, a steam chime whistle with a single blast every 20 seconds, and a submarine bell. Later it is proposed to place a radiobeacon on this lightship.

The great importance of this station to navigation is due to three factors. First, there is no sound fog signal along the entire coast of New Jersey, over 100 miles, between the entrances to New York Bay and Delaware Bay, and it is not practicable to place such a signal at a shore lighthouse because the track of vessels is too far offshore. Second, this location off Barnegat is of critical importance to shipping because of the change of course necessary here for all coastwise shipping, and because at this point traffic converges from Delaware and Chesapeake Bays, from Cape Hatteras and the South Atlantic coast and Panama, from New York entrance, and from New England. Third, because of the immense marine traffic along this coast and the fact that it is a low-lying shore, fringed with shallow water, compelling deep-draft vessels to keep well off; 50 strandings were recorded in this vicinity between 1903 and 1923.

Barnegat Lightship will mark an ocean crossroads of the first importance. This vicinity has heretofore been provided with only a gas buoy further inshore, and a lighthouse on the shore with no fog signal and of no help in low visibility. The new lightship will be anchored closed to the steamer lanes in water of sufficient depth for vessels to run directly for it without danger, and will give a safe departure to all vessels.

The need of a lightship off Barnegat was suggested by navigators some years ago. At hearings in New York and Philadelphia in 1919 there were strong representations from associations of masters and others as to the need for this lightship. In the program for vessel construction published in the annual report of the Lighthouse Service of that year estimate for funds for this vessel was given prominence, and Congress passed an authorizing act in 1920 which was based on this estimate. The delay in carrying out this much-needed project has been due to the urgent need of using lightships which have become available to replace older vessels no longer considered safe and some of which were over 70 years old.

The first lightship assigned to the Barnegat station was LV 79/ WAL 506. This vessel was commissioned in 1904 and spent twenty years marking Five Fathom Bank, located roughly fifteen miles from Cape May Lighthouse, before being used as a relief lightship for two years and then being deployed to Barnegat station in 1927.

LV 79 was equipped with a submarine bell in 1910 before arriving at Barnegat station. These bells were either placed in a position low in the ship so the sound could be transmitted through the water, or were even suspended beneath the ship and then struck with a prescribed frequency. To receive the sound, ships typically used a microphone suspended in a tank of water. One of these tanks was mounted to each side of the bow inside the ship. When the captain aligned his vessel so that the sound received at each microphone was of equal intensity, he knew his ship was pointing towards the lightship. A radiobeacon was added to Lightship LV 79 in 1930. When the radio beacon was synchronized with the submarine bell, ships could use the difference in the time of arrival of the two signals to determine their distance from the lightship.

LV 79 was withdrawn from Barnegat station in 1942 to serve as an examination vessel at Edgemoor, Delaware during World War II. The lightship would intercept all vessels entering the Delaware River and a boarding party would determine the ships identity, cargo, homeport and last port of call. If cleared, the vessels were allowed to proceed.

Following the war, LV 79 returned to Barnegat station, where it served until its decommissioning on March 3, 1967. Later that year, the lightship was donated to the Chesapeake Maritime Museum in St. Michaels, Maryland. Unable to afford maintenance expenses, the museum was forced to sell the lightship to Heritage Ship Guild in 1970 to be used as part of a floating display at Penns Landing in Philadelphia. The lightship was there through the 1980s. When the Heritage Ship Guild disbanded, ownership of the lightship was transferred to Rod Sadler, owner of Pyne Poynt Marina, and a new group called Camden Museum and Learning Center. Sadler wanted to refurbish the ship and move it to the Camden waterfront, but the vessel is sitting in mud at the marina in Camden, New Jersey, and is in dire need of maintenance and repair work.

After Sadler died in 2019, several items at the marina were offered for sale. One of these items was the half-ton, nickel bell mounted to the deck of Lightship Barnegat. The asking price was originally $10,000, but the Barnegat Historical Society managed to acquire the bell for around $9,000. A crane had to be brought in to lift the bell from the deck so it could be transported to Barnegat Light in early 2020. After it is restored, the bell was placed on display near the town pavilion in Barnegat Light. As the chances of Barnegat Lightship being restored are very slim, it is good that a piece of the lightship will be preserved.

LV 79 was replaced at Barnegat Station by LV 110, which served for two years, before it was replaced by a permanent sea buoy, forty feet in diameter, that was held in place by a 20,000-pound concrete sinker and a 7,000-pound steel mushroom anchor.

For a larger map of Lightship Barnegat LV 79/WAL 506 Lighthouse, click the lighthouse in the above map.

If traveling on Interstate 676 in Camden towards Philadelphia, take the last exit before the Benjamin Franklin Bridge, which should put you on 8th Street. Turn left to reach 7th Street.

If traveling from Philadelphia, take Interstate 676 over the Delaware River and take the first exit after the Benjamin Franklin Bridge. This should put you on Broadway. From Broadway, make a left onto Cooper Street, and then a left onto Haddon Avenue, which will take you over I-676 and become 7th Street.

Continue north on 7th Street and, you will find the entrance (somewhat hidden) to the marina on your right-hand side just before you reach the river. The lightship is not open to the public, but you can view it from the marina. The marina is not public property so you may need to ask for permission to visit.


Visiting the Pyne Poynt Marina is quite the experience. As we exited the car, we were greeted by two Rottweilers and a mangy dog. It took a leap of faith to assume the dogs were friendly. They escorted us during our tromp around the marina and didn't give us any trouble. We were told that we could have the lightship for $5. That gives a pretty good indication of the kind of shape it is in. Actually, it did look better than most of the other vessels in the "marina," which resembles a marine junkyard.