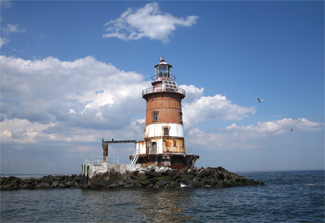 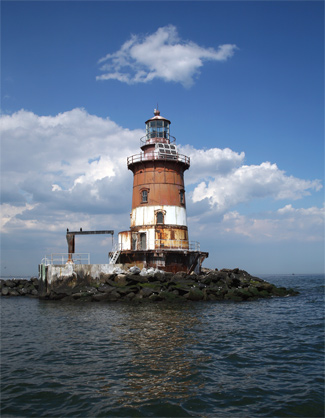 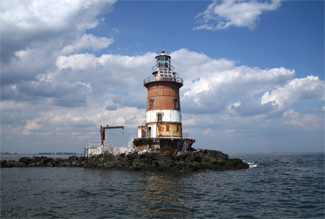 Many sources claim that Romer Shoal is named after the pilot boat William J. Romer, which reportedly sank near the shoal in 1863. While this claim sounds plausible, the following facts offer proof to the contrary: An 1870 edition of The Historical Magazine records that the shoal was actually named after Colonel Wolfgang William Romer, who sounded the waters of New York Bay in 1700 on order of the governor of New York. Following the appropriation of $15,000 in 1837 and $10,000 in 1838, Winslow Lewis surveyed the shoal and selected the position for the erection of a day-beacon. After construction started at the site, two naval officers complained that the tower was being built in the wrong place. Work was allowed to continue, but mariners were warned not to run for the beacon, or they would infallibly get on shore. Still, the misplaced daymark, a frustum constructed of granite blocks that supported a wooden mast surmounted by a square, wooden cage-work, did help mariners avoid the underlying shoal. In 1842, I.W.P. Lewis, nephew of Winslow Lewis, testified that he had designed the beacon, and that it was placed in eleven feet of water on the northwest extremity of the shoal instead of in five feet of water on the southeast extremity of the shoal, where it would have been a greater aid to navigation.

By 1870, the foundation of the granite tower on the west side of the shoal had settled, after being undermined by the sea, and some of the joints in the masonry had opened up from three to four inches, prompting Congress to provide $5,000 in 1871 to fill up the joints with concrete and protect the base with sheet iron and large granite blocks.

In 1883, the owners of several steamships plying the waters of New York Bay sent the following petition for a light on Romer Shoal to the Lighthouse Board: The need of a light upon this dangerous shoal has been demonstrated by the long list of vessels wrecked and seriously injured thereupon, while a good, clear light at this point would enable mariners to enter the port when the weather is too thick to make out the range lights, which they now dare not to do. The petition worked, and the construction of the new light was described in the Annual Report of the Lighthouse Board for 1886 under an entry for Romer Shoal, on the Dry Romer Shoal, near the northeast side of Swash Channel, entrance to New York Bay:

The work of establishing the light at this point was steadily pushed forward, although severe weather frequently made a landing at the site impracticable. The foundation was well advanced, and the first section of the pier set up in October. In November the second section of the pier was erected, and work was suspended during December on account of the weather. In January, 1886, the iron-work of the tower was received at the lighthouse depot. The foundation was strengthened in May with a cargo of stone, and by the end of June the entire structure was completed ready for lighting. The light will on July 15, 1886, be exhibited for the first time.

This second beacon, now equipped with a light, was a twenty-five-foot-tall skeletal tower that stood atop a concrete pier built around the old stone beacon. The tower was twelve foot square at its base, tapered to three feet, four inches at its top deck, and was bolted to the concrete pier. A tank of compressed gas was capable of powering the unmanned light for up to ninety days, saving the expense of an on-site keeper. After a decade of service, however, the tower and light were requiring more frequent attention, and funding was obtained for a manned lighthouse on Romer Shoal.

The present fifty-four-foot sparkplug lighthouse, erected atop the existing pier on the shoal in 1898, originally stood on the grounds of the Staten Island Lighthouse Depot and was used as an experimental lighthouse for testing fuels, wicks, bulbs, and other lighthouse equipment before it was disassembled and relocated just a few miles offshore. The four-story tower is topped by a cylindrical watch room and a decagonal lantern room from which a flashing white light, produced by a fourth-order Fresnel lens, was first exhibited on October 1, 1898. A 1,300-pound bell, struck one blow every thirty seconds, went into operation at the lighthouse on February 20, 1899. A concrete landing pier extends southwest from the tower and is home to a hoist that was used to lift the stations boat from a semi-protected boat basin.

Keeper William F. Rhodes, the seventh head keeper of the lighthouse, was commended in 1915 for rescuing two men whose canoe capsized near the lighthouse and in 1916 for rescuing Thomas F. Leland and James Heavy from their overturned boat and supplying them with clothing, food, and lodging.

During 1916, Keeper Rhodes was left alone at the station for nearly two weeks when his assistant went ashore for two days of leave and failed to return. Rhodes dared not leave the station for fear that he would be unable to return to the lighthouse and exhibit the light, so all he could do was wait for word of the fate of his assistant to reach him. The stations skiff eventually washed up at Great Kills, while the keepers body was found at Coney Island. Due to the lighthouse buttons on the coat the body was wearing, the police notified Commander Yeates, inspector for the third lighthouse district, and a clerk from the district office soon identified the body as the assistant from Romer Shoal. The lighthouse tender Pansy was quickly dispatched to the lighthouse to relieve Keeper Rhodes.

In 1919, following World War I, six signal quartermasters from the Navy were crammed into the lighthouse along with the three regular keepers to monitor all vessels entering and leaving New York Harbor. Much to the relief of the keepers, the six guests were removed after about a month due to shortage of Navy personnel.

The following year, the Navy took control of the entire lighthouse, assigning three of its men to mind the light and observe ships. Shortly after the men had arrived at the lighthouse, a submarine chaser approached the station on November 13, 1920 to deliver provisions. Choppy seas prevented the vessel from tying up near the lighthouse, so William Walker set off in the stations launch to meet the vessel. As the two ships were maneuvering near each other, a large wave pushed them close to the rocks that protected the lighthouse. Seeing the danger, the captain of the submarine chaser ordered his engines reversed. The resulting prop wash swamped Walkers craft and pulled him under the water to his death. The Navy removed its men from the lighthouse on October 16, 1921, and keepers from the Lighthouse Service returned to the station.

Another tragedy occurred at Romer Shoal on September 16, 1935, when a launch, overloaded with supplies from the lighthouse tender Tulip, sank and lead to the drowning of five men. Prior to this, the third lighthouse district had not lost one of its men in the previous twenty-five years in the arduous and hazardous duty of small-boat work from lighthouse tenders.

An incandescent oil vapor lamp took the place of a wick lamp inside the stations lens in 1928, and in 1936, Romer Shoal Lighthouse was equipped with a diaphone fog horn and a modern heating system.

In 1939, Romer Shoal Lighthouse, along with all navigational aids in the country, was placed under the control of the Coast Guard, who stationed four men at the light. Three of the coastguardsmen were always on duty at the lighthouse, while a fourth enjoyed a weeks leave. The daily routine of watching the light and maintaining the structure was a bit monotonous, but one of the crew explained to a reporter that the job had its advantages as well. About the only excitement we have is running the launch out in heavy seas, or going out to help a boat with a broken-down engine. That doesnt happen very often. But its not so bad here. And how many people get a weeks vacation every month?

When Romer Shoal Lighthouse was automated in 1966, its Fresnel lens was replaced by a 190-millimeter acrylic lens that continued to help mark the entrance to the busy harbor with a pair of white flashes every fifteen seconds. After a storm in December 1992 damaged the tower, the Coast Guard considered scrapping the lighthouse and replacing it with a steel skeleton tower. Joe Esposito, who served as caretaker of Staten Island Lighthouse at the time, refused to let the tower be destroyed, and through his ardent efforts it remains in place today. A metal awning that covered the main gallery at the base of the tower was removed in 1997. That same year, use of the stations submarine power cable was discontinued, the light was solarized, and a generator and fuel tanks were removed from the tower.

For years, there was talk of returning the lighthouse to its former home on Staten Island, which is now slated to become the National Lighthouse Museum. Unfortunately, the effort to get the museum bogged down for over a decade due, at least in part, to insufficient funding. Fishermen will, for now, still have the brown and white tower to direct them to the popular fishing site where doormat-size fluke are often taken.

A Notice of Availability, dated June 1, 2010, announced that Romer Shoal Lighthouse was excess to the needs of the United States Coast Guard and would be made available at no cost to eligible entities defined as Federal agencies, state and local agencies, non-profit corporations, educational agencies, or community development organizations for educational, park, recreational, cultural or historic preservation purposes. Qualifying organizations were given sixty days to submit a letter of interest.

After no group stepped forward to take responsibility for the lighthouse, the General Services Administration (GSA) placed the tower on the auction block on March 14, 2011. An opening bid of $15,000 was placed on June 16, after an inspection trip to the lighthouse was offered on June 9. The auction saw ten bids being submitted by five different individuals and concluded on June 24 with a winning bid of $90,000 by jvscalia, who had seemingly won the auction for Old Orchard Shoal Lighthouse in 2008 only to have the GSA declare that the bid of $40,000 did not exceed the fair market value for the property.

John Scalia, the auction winner, says he has always had a sweet spot for Romer Shoal Lighthouse as it was the first part of their new homeland his immigrant grandparents saw when approaching Ellis Island. Scalia plans to spend around $80,000 fixing up the property with an eye towards making it accessible for tours from the National Lighthouse Museum on Staten Island. Scalia owns several businesses on Staten Island, including a floral shop, a funeral home, and a limousine service, and views renovating Romer Shoal Lighthouse as a gift to his community.

Superstorm Sandy inflicted significant damage to Romer Shoal Lighthouse in 2012, blowing out all windows and doors on the first two levels and rearranging the protective riprap. Most significantly, huge chunks of the caisson foundation calved off. In late 2014, Romer Shoal Lighthouse, the non-profit in charge of the tower, received a $501,000 grant from the New Jersey Historic Trust that will be used to re-establish Coast Guard access to the lighthouse and repair some of the damage caused by Superstorm Sandy. On March 17, 2015, Congressman Frank Pallone, Jr. announced that $3,750,415.20 in federal funding is available to help repair the damage inflicted by Superstorm Sandy.

For a larger map of Romer Shoal Lighthouse, click the lighthouse in the above map.

Romer Shoal Lighthouse is best seen by boat. I chartered a trip out of Sewaren, New Jersey with Ray Mellett, who can be reached at (973) 953-7781. A distant view is possible from Fort Hancock on the northern end of Sandy Hook.