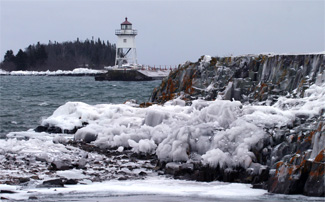 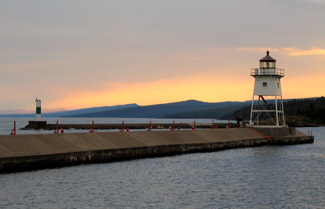 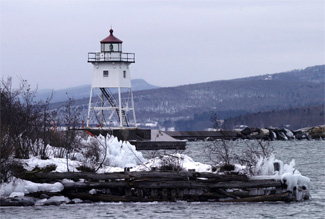 The 1854 Treaty of La Pointe opened up the northern shore of Lake Superior to settlement, and Richard B. Godfrey, an independent fur trader from Detroit, arrived in Grand Marais that same year. Two years later, in 1856, he became Grand Marais first postmaster. Native Americans called the place double bay for the two bays formed by a T-shaped point that projects into Lake Superior. The French name Grand Marais, meaning Great Marsh, was applied to the site due to a marsh at the head of the west bay. On May 26, 1856, a memorial from the citizens of Minnesota Territory was presented to the U.S. House of Representatives praying for lighthouses at Beaver Bay and Grand Marais on Lake Superiors northern shore. The matter was referred to the Committee on Commerce, and Congress appropriated $6,000 on August 18, 1856 for each of the two lighthouses. After an examination of the sites, the need for the lighthouses was found insufficient to warrant their construction. Not long thereafter, Godfrey left Grand Marais, and it was until 1871 that Henry Mayhew and Sam Howenstine, the two individuals considered the founders of the city, arrived.

A bill for harbor improvements at Grand Maris was passed by Congress in 1873, and the project was initiated in 1879. A 300-foot-long breakwater was extended westward from Mayhews Point to narrow the harbors entrance and thus provide an area of greater shelter for vessels inside the port. In addition, the harbor was dredged to a depth of sixteen feet to create the first harbor of refuge on the north shore. The breakwater was completed in 1883, and during a storm the following year, eleven vessels sought shelter in the harbor.

In 1878, a memorial from the legislature of Minnesota seeking an appropriation for a lighthouse at Grand Marais was presented to the U.S. Senate, which referred it to the Committee of Commerce. This committee denied the petition citing a report from the Lighthouse Board that considered it inexpedient to establish the light until the harbor improvements were finished. The matter was revisited after the completion of the harbor, and Congress appropriated $9,952 for the lighthouse on March 3, 1885.

Materials were landed at Grand Marais in July 1885 by the steam tender Warrington, and the lighthouse, which consisted of a square, pyramidal, wooden tower surmounted by an octagonal lantern, was finished on August 21. The stations light and fog bell commenced operation on September 1, 1885, and Joseph Mayhew served as the first keeper. The fog bell hung from a bracket that protruded from the western face of the lighthouse, and it was struck by machinery housed in the tower. The fog bell and striking machinery were formerly used at Passage Island, while the wooden tower was framed at the lighthouse depot in Detroit. The unexpended balance of the appropriation for the lighthouse was available for building a keepers dwelling, but efforts to obtain a site that year were unsuccessful.

Storm-tossed seas breached the base of the exposed tower in November 1886, but the hole was soon repaired. The tower was again damaged during a severe storm in October 1887, and, after repairs were made, a plank protection was put in place on the east side of the tower to prevent similar injuries. Negotiations with the owner of the land best suited for a keepers dwelling were carried out in 1888, but no agreement could be made.

In 1893, the Lighthouse Board noted that there was an unexpended balance of $8,409.17 in the Treasury remaining from the original 1885 appropriation, but the rulings of the accounting officers of the Treasury Department prevented this sum from being used to build a keepers dwelling. The Lighthouse Board requested $8,400 for the dwelling, and in 1895 Congress passed an act that allowed $4,000 of the unexpended balance to be applied toward the construction of the dwelling.

A site was obtained in 1895, and after plans and specifications were made, bids were requested for the project. After being selected, the lowest bidder declined to sign a contract. New bids were obtained, but again the selected bidder refused to enter into a contract. Bids were requested a third time, and the keepers dwelling was finally completed in October 1896, more than a decade after the lighthouse was first lit.

After a 350-foot-long breakwater on the western side of the harbor entrance was completed in August 1901, a brown iron post, atop which a lens-lantern was hoisted, was placed at its outer end the following year. This arrangement worked well until fall arrived and ice interfered with the hoisting gear. A contract was then made for a square, pyramidal, metal tower, with a focal plane of twenty-four feet, and this structure was delivered to the Detroit lighthouse depot on June 15, 1903. The tower was apparently not delivered to Grand Marais until the next year, when its light was finally shown for the first time on August 27, 1904.

A storm warning station was established at Grand Marais in 1910 by the weather bureau. Flag signals were displayed from atop a steel tower, 125 feet above lake level, during the day, and oil lamp signals were shown at night.

In early November 1919 another disastrous southwest storm struck Grand Marais, tearing a hole in the south and north walls of the lighthouse. Keeper John Woods noted it is not likely the old lighthouse will be repaired, A new one built in the spring. The current white, square, pyramidal skeleton steel tower, with upper part enclosed, was in place the next year, as on November 1, 1920, this structure was moved sixty yards east along the eastern breakwater. After the War Department issued a permit in October 1922, plans were made to return the lighthouse to the end of the eastern breakwater, where it stands today.

The Lighthouse Service Bulletin of September 1935 carried the following information on the light and fog signal at Grand Marais:

The recent improvement of light and fog-signal equipment at Grand Marais, Minn., on the north shore of Lake Superior, Under P. W. A. funds, involved another application of remote control which is being extended throughout the Service as opportunity is afforded to improve reliability and effect economies.

The installation at Grand Marais, Minn., comprises an 8-inch diameter diaphragm horn fog signal, in duplicate, and an electric light with lamp changer equipment, both located at the end of the harbor entrance pier, about 1,000 feet from the mainland Power is carried from local commercial lines through a cable laid along the pier deck. Electric motor-driven air compressors, air-storage tanks, and timing apparatus are also located in the pierhead tower enclosure.

At the shore end a stand-by automatic gasoline-engine generator plant is suitably housed in a small 8- by 12-foot control building, where time switch and flashers operating the main light are also located. In case of failure of commercial power, relay arrangement causes the gasoline engine generator stand-by unit to function automatically as an emergency power supply until commercial power is restored, when the load is automatically restored to the commercial lines. Control circuits are also extended from the control building to the keepers quarters in the village about 1,000 feet distant. These circuits provide visual and audible indication when the stand-by emergency unit is operating, and also means for starting either of the duplicate compressors in the pierhead tower for fog-signal operation.

A D-9 cylinder replaced the west breakwater skeletal light in the 1960s. The County County Historical Society is currently located in the keepers dwelling, which is on the National Register of Historic Places.

For a larger map of Grand Marais Lighthouse, click the lighthouse in the above map.

From Highway 61 in Grand Marais, take Broadway Street south to its end where you can park and walk the breakwater to view Grand Marais Lighthouse.