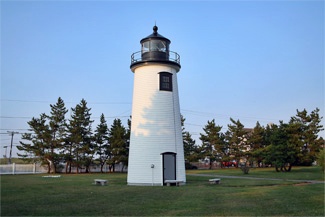 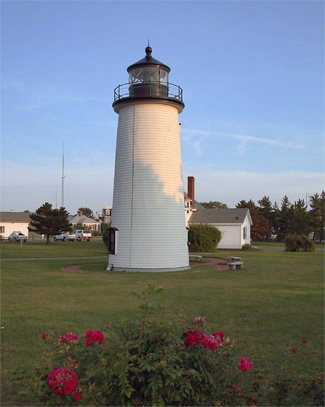 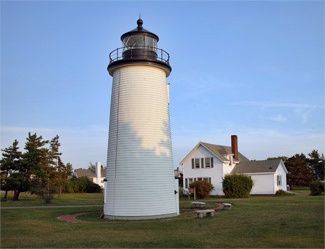 Plum Island is a barrier island that shadows the Massachusetts shore for roughly nine miles between the mouth of the Merrimack River on the north and the mouth of the Ipswich River on the south. Fires were routinely set on the beach at the northern end of Plum Island to guide mariners into the Merrimack River until 1783, when the Marine Society of Newburyport erected two official day beacons and employed men to display lanterns on them at night. When these methods proved insufficient, the Massachusetts Assembly gave its approval on November 16, 1787 for the erection of two lighthouses, each with a fixed white light thirty-seven feet above sea level, on the north end of nine-mile-long Plumb Island, provided the sum did not exceed £300 lawful money. When first lit on April 14, 1788, the lights became the thirteenth lighthouse built in the United States, and were likely the countrys first set of range lights. The merchants of Newburyport paid for the construction cost, which came to £266.

A year after navigational aids fell under federal jurisdiction in 1789, President George Washington appointed Abner Lowell as keeper of Plum Island Range Lights, and it may be that Lowell had been keeping the lights since their inception. Keeper Lowell was a kindly man known by many as Uncle, and was the first of three generations of Lowells to man the lights.

In addition to the range lights, a keepers dwelling was also built along with a signal house, where flags were raised to alert those on the mainland when a pilot was required or a ship was in distress. At night and during reduced visibility, an alarm gun provided by the Merrimack Humane Society was sounded to call for assistance.

In 1795, Abner received a salary increase from £66 to $266 (about £80) annually, because the light was rather isolated and the soil unfit for tilling.

On December 12, 1823, fifty-six-year-old Lewis Lowell, who had been appointed keeper in 1815 after the death of his father Abner, was overcome and died of asphyxiation after inhaling fumes from a charcoal fire he had lit under the lantern to keep the whale oil from congealing. His son Joseph Lowell assumed his duties and remained keeper until 1833, when Captain Phineas George was placed in charge of the light. Upon the retirement of Keeper George in 1857, it was noted that he by his faithful watchings day and night, in the coldest winter blasts, for vessels in distress, and by his superhuman efforts to save life and property in the cold of over twenty winters storms, to which his location is subjected, has entirely lost the use of his right arm, and can no longer work. His wife was described as being broken in health by over-exertion in assisting him and raising their eleven children. Franklin Carleton replaced Phineas George as keeper.

Brutal weather posed a hazard for the lighthouse and its keepers. In 1808, both towers were blown over by a whirlwind, prompting Congress to approve $10,000 in February 17, 1809, for replacing the two lights. Congress approved $4,000 in 1838 for rebuilding the two lights on Plum Island, but it is likely that the two towers were simply altered and/or repaired as only $950.44 was spent. Then in December 1839, a gale nearly washed away one of the towers. Niles National Register contains a description of the storm given by Keeper Phineas George:

The keeper of the lights on Plum Island, describes the tide as having flowed quite across the island in a number of places, making many deep ravines, and causing many acres of meadow land to be covered with sand. The hotel and site, with almost all the buildings, were surrounded with one entire sheet of water, as well as the road leading to the bridge. The violence of the gale was such, as to remove many sand hills, forming at the same time many lakes and ponds. He also remarked that the whole eastern side of the island had washed away to an astonishing degree.

Shipwrecks and loss of life were not uncommon in the area. In December 1839 alone, three storms destroyed more than 300 vessels and killed over 150 persons. The wreck of the Richmond Packet on December 22, in which the captains wife was swept away and drowned, drew considerable attention because the gale blew up so suddenly that Keeper George who had left the light only for a few hourswas unable to return, leaving the lights dark at the harbors entrance.

In 1842, the two towers were described by I.W.P. Lewis as: Two frame buildings, 36 feet high, resting upon logs and blocks of wood, laid on the surface of the sand hills, and both being movable to range with the shifting sand bar of the entrance to Newburyport harbor and the mouth of the Merrimac river; both towers dilapidated, decayed, leaky, and out of position, as to the bar channel, twelve months past. At that time, the wrought iron lanterns each held eight lamps with twelve-and-a-half-inch reflectors. The keepers dwelling was described as: A frame building on brick basement, laid upon the surface of the sand; three rooms on first floor, and two chambers in the attic; erected only six years since, and now very much out of repair; leaky on all sides, as well as the roof; sand blows away from the brick basement so as to endanger the foundation.

Lewis proposed to Stephen Pleasanton, the Treasury auditor responsible for lighthouses, that instead of the old system of marshalling two crazy old towers about and over the sand hills, two parallel iron rails should be erected about 108 feet long, and positioned about 100 feet apart. The rails, each holding a lantern with three lamps with 14-inch reflectors, would allow the lights to easily be adjusted in response to the shifting sandbar. For the construction of this novel system, Lewis requested a modest $1,315.91.

Perhaps Pleasanton was influenced by Lewis open criticism of Pleasantons friend (and Lewis uncle) Winslow Lewis, whose shoddy building practices resulted in many poorly constructed lighthouses and keepers dwellings, as Pleasanton rejected the proposal, choosing instead to repair and refit the towers with new cast-iron lanterns and to move them to better positions.

A bug light, so-called because it was a smaller, strange-looking tower, was added to the light station in 1855. On August 8, 1856, the front range tower burned down after being struck by lightning and was not replaced. Rather than rebuild the front tower, the bug light was used to form a range line with the old rear tower. Also in 1856, the rear tower was equipped with a fifth-order Fresnel lens. In 1871, a new fourth-order Fresnel lens replaced the fifth-order Fresnel lens, and a new keepers dwelling was erected. The Annual Report of the Lighthouse Board for 1871 noted: Newburyport is a place of sufficient importance to justify the establishment of a more powerful light than the present one, and the erection of buildings of better materials than wood. The sum of $50,000 was requested to build a permanent cast-iron tower, supported on a concrete base, extending below the low-water line. The thought was that the iron tower could be relocated at the small expense of making a new concrete base, but this plan was never carried out.

The front light, or bug light, was described in 1879 as a square structure standing twenty feet high and exhibiting a fixed white light. The tower was situated three hundred feet from the rear tower and was movable. In 1875, the seaward side of the front light was painted black so it could be distinguished in daytime when in range with the octagonal rear tower, which was whitewashed. Mineral oil replaced lard oil as the illuminant in the front light in 1877. This action reduced the keepers workload as the mineral oil would not congeal in cold weather, and the new lamp did not have to be trimmed during the night.

Over the years, the towers on Plum Island were moved north from time to time a total of about 3,000 feet. In 1887, the Lighthouse Board requested a survey to determine the boundary-lines of the lighthouse site, as trespassers had erected buildings near the relocated towers and had even run a railway line between them. The U.S. attorney for Massachusetts examined various histories and records, some dating back to colonial times, to determine the property lines, and the results were submitted to the Department of Justice, but years later the Lighthouse Board was still waiting for a ruling on the matter.

In 1898, the current forty-five-foot wooden conical tower replaced the old octagonal wooden tower, and a telephone line was run to the Plum Island Lifesaving Station, under an appropriation for national defense. At this time, the keepers dwelling received a porch on two of its sides and a cistern in its cellar, and its upstairs was remodeled to arrange the rooms more conveniently. The new conical lighthouse was placed in operation on September 20, 1898.

Electricity came to Plum Island Lighthouse in 1927, replacing the kerosene that had been in use since 1877. For a number of years, keepers were assigned the additional duty of maintaining a set of range lights across the mouth of the river at Salisbury Beach, after the front light on Plum Island was discontinued on September 30, 1890.

When the light was automated in 1951, there was no need for a keeper, and the keepers dwelling was subsequently used as the headquarters for the Parker River National Wildlife Refuge. Friends of Plum Island Light was formed in 1995 to care for the lighthouse. This volunteer group, operating under a lease from the Coast Guard, maintained the lighthouse and occasionally opened it to the public. In 2003, ownership of the lighthouse was transferred from the Coast Guard to the City of Newburyport, which immediately granted a ten-year lease of the tower to Friends of Plum Island Light.

For a larger map of Newburyport Harbor (Plum Island) Lighthouse, click the lighthouse in the above map.

From the Newburyport Harbor Range Lights on Water Street in downtown Newburyport, continue east on Water Street for 1.3 miles, where Water Street will become Plum Island Turnpike. Follow the turnpike for 1.8 miles to Plum Island, and then turn left on Northern Boulevard. Continue on Northern Boulevard for 1.3 miles to the northern end of the island, where you will see the lighthouse on your left. The Friends of Plum Island Light maintain the lighthouse and sometimes open the tower. Call (978) 973-6935 to see when open houses are offered.

The lighthouse is owned by the City of Newburyport and leased to Friends of Plum Island Light. Grounds open, dwelling closed, tower open during open houses occasionally held on summer weekends.