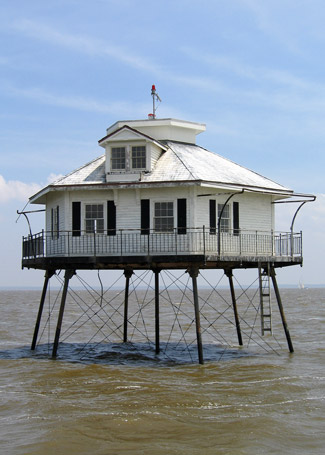 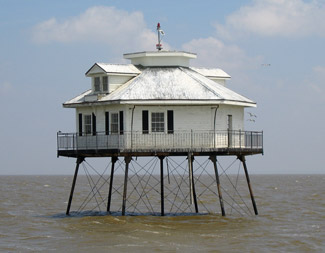 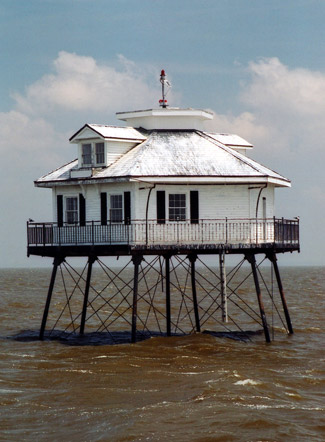 Captain John Grant is rightly known as the Father of Gulf Coast Transportation, and several of his transportation projects are tightly coupled with Gulf Coast lighthouses. At the age of twenty-five, Grant perfected a dredge and used it from 1826 to 1829 to deepen the passes into the harbor at Mobile. A year after the dredging, Choctaw Point Lighthouse was built where the Mobile River empties into Mobile Bay to aid vessels that could now reach the port. Grant next turned his talents to the construction of the railroad linking New Orleans with Milneburg on Lake Pontchartrain. Port Pontchartrain was established at the railroads terminus in Milneburg, and several lighthouses were subsequently constructed to improve navigation into the port. Grants name is mostly closely associated with his dredging in 1839 of a pass linking Mississippi Sound with Mobile Bay. Known as Grants Pass, this channel made it possible for ships to avoid entering the Gulf of Mexico when sailing between Mobile and New Orleans. Grant required toll payments for use of his pass and eventually constructed a private lighthouse at Tower Island to assist navigation along his waterway. Single-handedly, Grant had greatly improved access to Mobile Bay and the port at Mobile, however, the twenty-nine miles between these points were still hazardous for mariners. Mobile Bay is quite shallow, and in the early 1800s the best shipping channel inside the bay was only marked by wooden stakes and copper-clad barrels. It wasnt until a channel with a depth of seventeen feet was dredged in the 1880s that large vessels could safely reach Mobile. This improvement prompted the construction of a lighthouse at the bend in the dogleg channel, which was located midway along the route. Given its location in roughly the center of the bay, the lighthouse is known as both Middle Bay Lighthouse and Mobile Bay Lighthouse.

Due to high labor costs in the post-Civil-War South, the lighthouse was prefabricated in the North and then shipped to Mobile Point, where it arrived in 1885. A temporary working platform, which measured sixty feet square and was supported by forty-eight fifty-foot piles, was established at the site to support the workers tasked with erecting the lighthouse.

The screwpile lighthouse consisted of a wooden hexagonal dwelling with a pyramidal roof that slopped upwards to the centrally located lantern room. The lighthouse was supported by seven legs  one in the middle, and a single leg extending from each corner of the superstructure. After the piles had been screwed into the bottom of the bay, the structure suddenly settled seven-and-a-half feet on September 12, 1885. Wooden piles were hurriedly driven around the screwpiles and succeeded in stabilizing the lighthouse. The settling was so even on each screwpile, that the lighthouse was only three or four inches from being perfectly level.

On December 1, 1885, the light from a fourth-order Fresnel lens first cast its beams from atop the lighthouse at a focal plane of forty-one feet. The lights characteristic was fixed white varied ever thirty seconds by a red flash. The station also had a fog bell that was struck a blow every five seconds when conditions merited it. The foundation piles were painted red, the dwelling white with green blinds, and the lantern room black.

After serving for just twenty years, the lens and lantern room were removed from the lighthouse in 1905, and two acetylene lights were mounted on a pole protruding from the roof. During World War I, the keeper responsible for the lights and his wife had a baby at the lighthouse. When the mother was unable to nurse the infant, the couples creativity was put to the test. Rather than send the mother and child ashore, a small corral was created on the lighthouses gallery, and a milk cow was transported to the station.

The light was electrified in 1935. During the next several decades, no keepers were present to care for the lighthouse, and it fell into a state of disrepair. Pete Mellenberger served on the U.S.C.G.C. Blackthorn and Salvia in the 1960s and remembers trips to Mobile Bay Lighthouse. We called the Middle Bay Lighthouse, he recalls, the Half Way House as it was half way between the gulf and the dock where we were moored. I remember we used to pull dry batteries up in a bucket to replace the old ones. The Half Way House was in bad shape in the early 60s, no windows and seagull droppings all over the inside. We did the same with the Sand Island Lighthouse. Dry batteries, a lot of them. This was an all day job as the dock was usually in need of repair. We had to toss most of the batteries over to the rocks where one of our crew was waiting to catch them and carry them up the stairs inside to replace the bank of dead ones. Then take all the old batteries back down and toss them to the boat to take back to base.

In 1967, the Coast Guard received permission from the General Services Administration to demolish the dilapidated lighthouse. Fortunately, several parties protested the decision. The Mobile Bar Pilots Association argued that the lighthouse still served a vital navigational role, as it was more readily picked up on ships radars than the small, modern buoys. The pleas were convincing, and the lighthouse was spared.

Like any exposed structure, the lighthouse is in need of periodic maintenance and refurbishing. By 2002, the lighthouse had deteriorated quite badly, and a major restoration effort was initiated by Thompson Engineering under a $349,400 contract from the Alabama Historical Commission. As part of this project, the lighthouse received a new slate roof, and damaged wood and corroded tie rods were replaced. The roughly fifteen-foot-tall pyramidal structure that displayed a red flashing light atop the lighthouse was replaced by a six-foot pole supporting a solar-powered red light.

A Fresnel lens from Mobile Bay Lighthouse is currently on loan to the Fort Morgan Museum, where it is on display along with the lens from Sand Island Lighthouse. The note below the lens states that it was one of a pair of lenses that replaced the original fourth-order lens used in the lighthouse. Other sources claim the lens in the museum is the original lens. A lantern room similar to the one used on Mobile Bay Lighthouse was obtained from a collector in California and restored by the Alabama Lighthouse Association. The lantern room along with a Fresnel lens on loan from the Coast Guard are currently on display at the Mobile Regional Airport.

The Alabama Lighthouse Association had new exterior doors installed at the lighthouse around 2005 and is working to raise funds for new handrails so public access can be allowed.

In June 2008, the Alabama Lighthouse Association published a strong proposal to move Mobile Bay Lighthouse ashore, where it would be more accessible to the public and easier to maintain. The proposed site for the lighthouse is Battleship Park, which receives 300,000 visitors each year. On December 2, 2009, the Alabama Historical Commission voted against the proposed move and instead unanimously agreed to spend $30,000 a year on maintenance and restoration of the structure in its present location.

A $270,000 restoration of the lighthouse was undertaken in 2010 and included structural repairs, above-water stainless steel tie-rods, ten new windows and a complete exterior painting.

For a larger map of Mobile Bay (Middle Bay) Lighthouse, click the lighthouse in the above map.

This lighthouse is best seen by boat. A fourth-order Fresnel lens used in Mobile Bay Lighthouse is on display at Fort Morgan Museum.

A lantern room similar to the one used on Mobile Bay Lighthouse was on display at Mobile Regional Airport, along with artifacts from Sand Island Lighthouse. This display was moved to National Maritime Museum of the Gulf of Mexico after it opened.

The lighthouse is owned by Alabama Historical Commission. Lighthouse closed.


Like many other visitors to this lighthouse, we employed the services of Captain Jim Hall. The trip up the bay and back was a bit rough, but the chance to visit the light was worth the spray and the bouncy ride. Captain Hall was very knowledgeable, and even rounded up some other lighthouse enthusiasts to share the experience (and the cost). We met some dedicated lighthouse people that day, and had a great time swapping lighthouse stories.