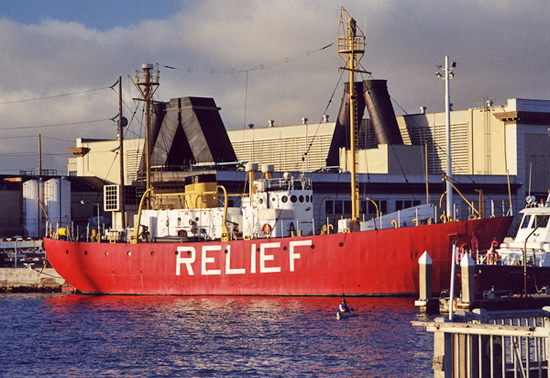 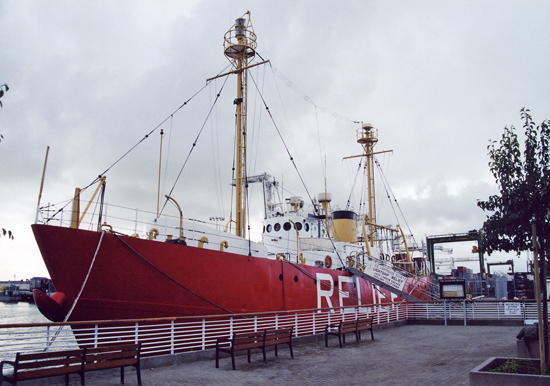 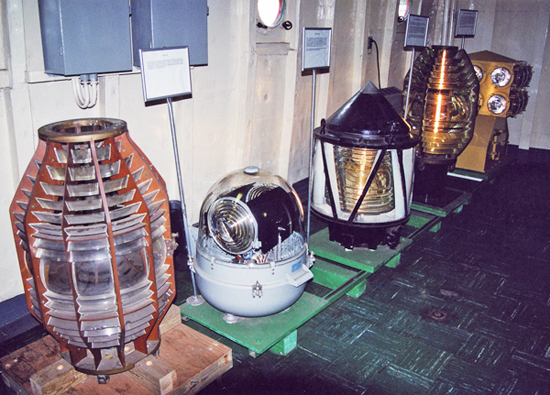 Construction on WLV 605 began at Rice Brothers Shipyard in Boothbay Harbor, Maine on March 1, 1949. Robert Rice, who along with his father and roughly 150 other men were kept busy by the work, recalls that the ship had a mind of her own and was always in trouble. When she was about 65% complete, she was involved in a fire, which would have been more serious if the vessel werent constructed of steel. While being launched on May 4, 1950, she busted the ways on her port side, and on her way back from sea trials in February of 1951, she grounded on a sandbar two hundred feet from her berth.

Rice invited the 7th and 8th graders from a local school to participate in the sea trials, and about fifty-five youngsters went along. WLV 605 encountered rough seas throughout the trial, and by the time she returned to dock, about half of the youngsters and some members of the Coast Guard were seasick. Instead of staying above deck, many of the sick retreated to the crew quarters and as a result about a dozen mattresses had to be replaced.

WLV 605 was accepted by the Coast Guard in February of 1951 and steamed south to its first station, Overfalls, located three miles off Cape Henlopen at the entrance to Delaware Bay. Lightships were used to either mark an obstruction, like a reef, or to indicate the entrance to a bay or harbor, which was the case with the Overfalls station.

A crew of fifteen was assigned to the lightship when a reporter visited her in 1955. One seaman and an engineman were on watch at all times. A four-hour watch was typically served followed by eight hours off. The men were aboard for twenty-one days, and then given an eight-day leave.

Seaman Murphy explained that during his watch he had to keep an eye on the surface-search radar, and if a ship got within a half mile and was on a collision course, he was required to sound the general alarm. The crew didnt mind an occasional false alarm, as it was much better to be topside and outfitted with a life jacket than asleep in a bunk should a collision occur. When the alarm was rung, the profanity was often choice, as the men stood topside, often barefooted and in their skivvies, and witnessed a monstrous black shape pass within yards of the lightship.

Since the lightship acted as a mid-channel marker, traffic near the lightship was common. In October of 1954, a large tanker staved in the lightships bow and knocked it a full quarter mile off station.

The ships light blinked on for ten seconds and off for five seconds, while the fog horn, when necessary, sounded for 1.5 seconds, followed alternately by silence intervals of three and fourteen seconds. WLV 605 was also equipped with a radio beacon that sent out a dot-dash-dot signal on the 1st, 4th, 7th, and 31st, 34th, and 37th minutes of every hour.

An amateur ham radio station, K3CGA, was established aboard the lightship to help boost morale. By contacting a ham operator on shore, the men were often able to speak to their wives for hours. A movie projector was also brought on board in 1955 to help the man pass the time.

WLV 605 served at the Overfalls station until 1960, when she was transferred to the Blunts Reef station off Cape Mendocino, CA. There she would serve nine years, until she became the Relief lightship for the west coast in 1969 and operated out of Astoria, OR. Whenever a vessel on one of the four remaining active west coast lightship stations need to be serviced, WLV 605, displaying RELIEF in white letters on her red hull, would be temporarily anchored at the station.

With the Columbia station being the only remaining active station on the west coast, WLV 605 was decommissioned in 1975 and transferred to the General Services Administration. The State Capital Museum Association of Olympia, WA requested and was awarded the ship. The city had hoped to open the lightship as a museum, but the plans never worked out. In 1977, WLV 605 was sold to the highest bidder, a Mr. Alan Hosking of Woodside, California who submitted a bid of $79,000 - just beating out a scrapyard. Hosking sailed the lightship from Olympia to Oakland, California, where the vessel was dry-docked. The bottom of the hull was restored, a new radar installed, and the old cable steering was replaced by a hydraulic system. After renovations, the ship was sailed to Half Moon Bay, California, where it was anchored in the harbor until Hosking donated the lightship to the U.S. Lighthouse Society on New Years Eve, 1986.

In February of 1987, WLV 605 was sailed from Half Moon Bay to Ninth Avenue Terminal in the Oakland Estuary, where she would remain for the next fifteen years as volunteers spent thousands of hours to restore the lightship to its 1951 appearance. The lightship was dry-docked in 2000 for twenty-five days so the hull could be repaired and painted. Finally, in June of 2002, WLV 605, docked alongside FDRs presidential yacht Potomac, was opened to the public. The lightship was designated a National Historic Landmark in 1990, and the U.S. Lighthouse Society received the California Governor's Historic Preservation Award in 2003 for its preservation efforts.

In 2010, the U.S. Lighthouse Society announced that it was willing to give its lightship to a worthy organization. Over a seven-year-period, the lightship drew 16,585 visitors and made roughly $5,400 a year from donations and souvenir sales, but the annual cost to maintain the vessel was around $30,000. The society has pitched the lightship to the National Park Service, which runs the San Francisco Maritime National Historical Park, and the Coast Guard Auxiliary, but the groups were not interested. In 2012, the lightship was transferred to The Anchor Program, an Oakland-based maritime nonprofit that will use the vessel as a floating classroom. Volunteers with the U.S. Lighthouse Society will continue to open the vessel for public tours.

For a larger map of Lightship Relief WLV 605 Lighthouse, click the lighthouse in the above map.

From south of Oakland, take Interstate 880 north and exit at Broadway. Take a left on Broadway and continue into Jack London Square. From north of Oakland, take Interstate 880 to the Broadway/Alameda exit, turn right onto 5th street, then and after twelve blocks, take a right on Broadway, which leads to Jack London Square. The lightship is open Saturday and Sunday from 11 a.m. to 4 p.m. and Wednesday from 1 p.m. to 4 p.m. For more information, call (510) 992-3534.

The lightship is owned by The Anchor Program. Grounds open, ship open for tours.