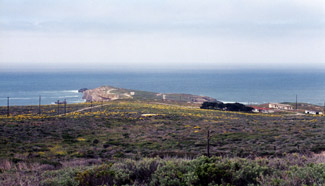 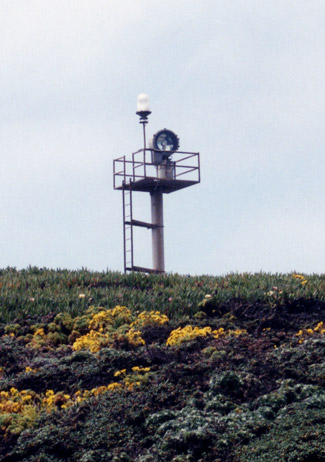 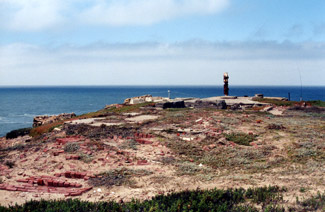 Just south of the city of Lompoc (pronounced Lahm-poke), the California coastline bends abruptly eastward. Ships sailing south along the coast here must locate the Santa Barbara Channel, which lies between Points Arguello and Conception on the mainland and San Miguel Island, and then make a hard turn to port to enter the channel. Performing this maneuver has been described by mariners as trying to sail a ship through the eye of a needle. Given this difficulty, it is no wonder that this section of the coast is known as the Graveyard of the Pacific and is home to over fifty known shipwrecks. On October 1, 1854, the side-wheel steamer Yankee Blade ran aground near Point Arguello taking several passengers and a fortune of gold down with her. Sixteen months later, Point Conception Lighthouse began marking this stretch of coast, and in 1878, the Lighthouse Board recommended that a second light be placed twelve miles northwest of Point Conception at Point Arguello, though they didnt request funds at that time. Acreage for the new station was donated by a landowner the following year, and in 1888 the Lighthouse Board asked for $35,000 to build the station. This request was repeated each year until Congress finally funded the project on March 3, 1899.

Work on the point began in July 1900, and Keeper William A. Beeman first lit the lamp in Point Arguello Lighthouse on February 22, 1901. The lighthouse, a one-story rectangular fog building with a pitched roof and a tower extending from the center of its western end, resembled a church, calling forth worshipers from the sea. Atop the short tower was a circular lantern room, which housed a fourth-order, F. Barbier Fresnel lens formerly used at Point Hueneme Lighthouse. The lighthouse stood near the outer end of a rocky finger of land that extended from the coast, and six hundred feet farther up the finger a single family dwelling and a two-story duplex were constructed to house the keepers. Two first class sirens, operated by two thirteen-horsepower oil engines and compressors, were activated three months after the initial lighting to serve mariners when fog shrouded the coast.

Additional buildings at the station included a blacksmith shop, a barn, and an oil house that was capable of storing a years supply of oil to operate both the light and the fog signal. Water for the station was taken from a spring on adjoining land and piped 7,000 feet to two masonry cisterns, which then distributed the water by gravity to the various buildings.

Twelve-inch whistles replaced the sirens on November 17, 1902, and as Point Arguello was one of the foggiest places on the California coast, they saw a lot of use. During the twelve-month period ending June 30, 1907, the fog signal was in operation 1,267 hours or nearly fifty-three days.

A decade after the lighthouse was activated, a detached tower for the light was built adjacent to the fog signal building in 1911.

The establishment of Point Arguello Lighthouse did not bring an end to shipwrecks in the area. Early in the morning of July 11, 1911, Keeper William A. Henderson received notification on his wireless that the steamer Santa Rosa had ran aground north of the station. Henderson hurried to the site of the accident, and found that the vessel was lying broadside to the beach. Shortly thereafter, two steamers arrived to offer their assistance, and a cable was fastened to the Santa Rosa. The stern of the ship was soon pointing west, but the strain on the cable proved too great, and it ruptured, allowing the vessel to swing broadside again. As the day passed, the seas increased, and the constant beating of the surf broke the Santa Rosa in two.

A lifeboat and life raft were employed to shuttle passengers ashore, but landing in the pounding surf proved dangerous. Helpers on shore formed human chains and waded into the water to pull people out of the surf and undertow. Later, a breeches buoy was established between the ship and a nearby railroad trestle, and passengers were pulled along the line to the beach. By 10:30 that night, all the surviving passengers were ashore, and work had begun on salvaging some of the ships stores. Wet, cold, hungry, and exhausted from a day of rescue work, Keeper Henderson arrived back at the lighthouse at 11:30. Over 200 people were saved form the Santa Rosa, but roughly twenty perished while trying to reach shore.

With the addition of a Radio Direction Finding (RDF) Station, a small community was starting to form at Point Arguello. The town was given the name of Arlight, a contraction of Arguello and lighthouse, and was even granted its own post office. Keeper Arvel Settles and his wife Helga served as the postal agents, and their dining room table was used as the mail sorter. Incoming mail was thrown from the passing trains in sacks, while the outgoing mail was snatched from a pole erected next to the tracks.

In spite of the presence of both a lighthouse and RDF station on Point Arguello, the U.S Navys worst navigational tragedy occurred at Honda Point just north of the lighthouse on September 8, 1923. A flotilla of destroyers based in San Diego had been on maneuvers in Puget Sound, and after a layover at San Francisco, fourteen vessels sailed toward home at 7:30 a.m. on the twenty-third. As it grew dark, the ships, which were steaming south at twenty knots, formed a single-line column behind the flagship USS Delphy. Due to dense fog, the captain and navigators aboard the Delphy were forced to rely on dead reckoning and the RDF to determine when to turn east into Santa Barbara Channel.

Shortly after 9 p.m., a reading on the RDF positioned the fleet several miles north of the channel, however, the technology was new and could not distinguish between a true bearing and its reciprocal. Captain Watson chose to ignore the reading and gave the command to turn to port. In a matter of minutes, the Delphy had run aground on Honda Point, roughly two miles north of Point Arguello. The trailing vessels obediently followed the flagship, and soon six other destroyers lay stranded along this rocky section of coast.

The USS Young was ripped open by a submerged rock near where the Delphy ran aground, and quickly flooded and rolled over. Twenty sailors aboard the Young perished, before they could escape. The Delphy was the only other destroyer to suffer casualties; three of her crew were lost.

Several sailors thought they had run aground on San Miguel Island, but the blast of a trains whistle shortly after the incident gave notice that they were on the mainland. A frantic rescue effort continued through the night and into the next day. The keepers from Point Arguello Lighthouse (Gottfrid Olson, Arevel Settles, and Jesse Mygrants), along with men from Lompoc and a nearby railway maintenance house, joined in the effort, and the following afternoon, over 550 survivors boarded a special train sent from San Francisco, which carried them on to their intended destination of San Diego. The Point Arguello keepers were alerted to the incident by the distress calls of five sailors aboard a life raft who were hauled up the steep rugged cliffs at the station and given medical assistance.

A contingent of eighteen sailors was left behind to protect the wrecked destroyers from looters. News of the incident traveled fast, and the Southern Pacific Railway capitalized on the opportunity by running sightseeing excursion trains to the site. Salvage operations recovered valuable weapons and instruments from the ships, and then dynamite was used to submerge most of the remaining traces of the embarrassing wreckage. Reminders of the tragedy still exist, and an offshore rock on which the USS Woodbury was stranded is now known as Woodbury Rock or Destroyer Rock.

Fifty years after the disaster, a team of divers recovered an anchor from one of the destroyers and placed it on a cement pad near the site as a memorial. During a ceremony held to commemorate the seventy-fifth anniversary of the wrecks, a plaque listing the names of the twenty-three lost sailors was dedicated. Since then, the bluff on which the anchor rested has been deemed unstable, and the anchor has been removed and loaned to the Lompoc Valley Historical Society, who has it on display in Lompoc.

In 1934, the lighthouse was replaced by a pair of thirty-six-inch revolving aero beacons mounted on top of a steel tower. When the Coast Guard assumed responsibility for U.S. Lighthouses in 1939, the keepers dwellings were converted to barracks and additional ranch-style houses were built nearby. Fifty-year-old Thayer J. Allen was serving as an assistant keeper at Point Arguello in 1941, when he inadvertently touched a high-voltage wire in the transformer room and was killed instantly. Allen was giving a visitor from Los Angeles a tour of the station and had just pointed out the high tension wire when he accidentally swung his hand against it as he turned to leave.

After a Loran Station was added to Point Arguello in 1945, there were up to sixteen personnel on site. In 1967, the original dwellings associated with the lighthouse were razed, and a new metal tower was installed.

Today, Point Arguello is part of Vandenberg Air Force Base, and as such is typically off limits for civilians. However, you can catch a glimpse of the point from the Amtrak trains, which pass nearby. The station is now automated and all that remains at the site is a metal tower with a modern, solar-powered optic, the remains of an inoperative fog signal, and the Coast Guard housing, which is in very poor condition.

If you happen to live in Southern California, perhaps you have witnessed those curious spiraling contrails that occasionally appear in our western skies. Those interesting patterns are created by rockets launched from facilities located at the base of the hills just east of where the lighthouse stood on Point Arguello.

For a larger map of Point Arguello Lighthouse, click the lighthouse in the above map.

Being located within Vandenberg Air Force Base, access to the point is generally not granted to the public. You can, however, view Point Arguello from the Amtrak Pacific Surfliner that runs between Santa Barbara and the Surf/Lompoc Station. Public tours of the base are offered, but they may not pass near Point Arguello.

The light is owned by the Coast Guard. Grounds closed.