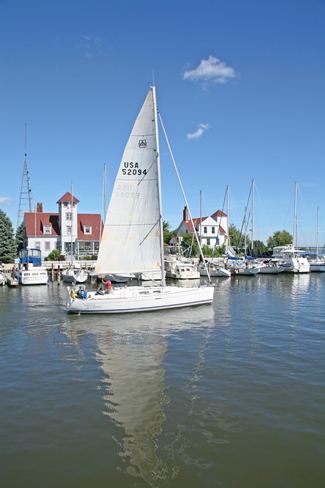 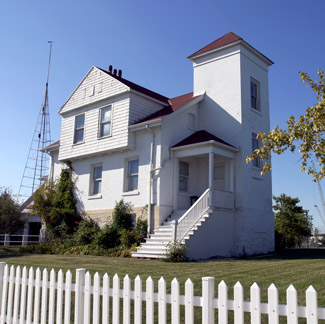 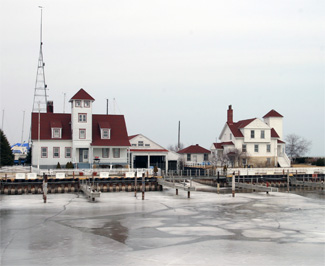 Due to the abundance of intertwining roots in its riverbed, Native Americans named the river that empties into Lake Michigan at Racine Chippecotton, which means root. Europeans followed the Indians lead, and, depending upon their nationality, referred to the stream as Root River or Racine River  Racine is French for root. Under an appointment by the Board of Navy Commissioners, Lieutenant G.J. Pendergrast examined sites for lighthouses on the Great Lakes in 1837 and noted the following about Root River:

Root river is situated twenty five miles from Milwaukie. It is of sufficient size to allow of an excellent harbor being formed at a moderate expense. Here there is quite a flourishing town, containing about four or five hundred inhabitants. It has an exceeding fair prospect of becoming a place of importance; and should the General Government make a harbor here, it will prove a great benefit and convenience to navigation. The light at this river will be particularly serviceable, not only as a guide to the anchorage, but to warn vessels of a dangerous reef lying about two and a half miles from the shore. The light to be a revolving one, so as to prevent it from being mistaken for Milwaukie light.

Congress had already appropriated $5,000 for a lighthouse at Root River in March 1837, after the Legislative Assembly of the Territory of Wisconsin had requested $26,000 the previous year to improve the harbor and erect a lighthouse at Racine.

In 1838, Benjamin Pratt, the first brick manufacturer in Racine, began work on the conical lighthouse, which tapered from a diameter of twelve feet at its base to three feet at its lantern room and stood just over twenty-eight feet tall. The lantern room was equipped with a lighting apparatus made up of ten lamps set in fourteen-inch reflectors that revolved to produce a white flash every ninety seconds. Due to the bluff on which the lighthouse was located, the light had a focal plane of seventy-five feet. A keepers dwelling was built shoreward of the tower, near the present-day intersection of Seventh Street and Lake Avenue. This brick, one-and-a-half-story home measured twenty by thirty-four feet, with an attached fifteen by thirteen-foot kitchen. The lighthouse was put into service in 1839, with Amaziah Stebbins serving as its first keeper.

In time for the opening of navigation in 1858, a fifth-order Fresnel lens was installed in Root River Lighthouse, replacing the antiquated lamps and reflectors and changing the characteristic of the light to fixed white. In 1859, the board of trade of Racine petitioned Congress for the construction of a pier-head on the north pier in the harbor at that place and the erection of a light-house thereon, and Congress responded the following year with an appropriation of $30,100 for the construction of a suitable beacon light at the port of Racine.

The Lighthouse Board noted in its 1862 report that the work of constructing a cribwork pier for the lighthouse at Racine had been delayed by the failure of the contractor to procure sufficient timber. The engineer in charge ordered that timber delivered to Milwaukee for a pier there be sent to Racine, but a scarcity of labor caused the work to be delayed until 1865, when after the arrival of the requisite materials, the work was being vigorously pushed in order to secure it before the fall gales set in.

With the pier complete, a yellow brick lighthouse was constructed thereon in 1866. Built in a schoolhouse style, Racine Harbor Lighthouse resembled several others built on the Great Lakes at this time and consisted of a rectangular, one-and-a-half story dwelling with a square tower rising from its seaward side. The lighthouse was activated on September 10, 1866 using the fifth-order lens from the old Root River Lighthouse, which was discontinued. A fourth-order lens, which illuminated an arc of 270° instead of the 180° covered by the fifth-order lens, was placed in the lantern room in 1870, the same year the 1839 lighthouse was sold to L.S. Blake and James T. Elliott for $1,625. After Elliott became the sole owner of the lighthouse in 1876, he torn it and the adjacent keepers dwelling down and used the bricks to construct a home on the site.

On June 26, 1867, a contract was let for extending the north pier 416 feet seaward. Once the pier was completed, work on erecting a pierhead beacon and an elevated walkway to connect it to the 1866 lighthouse was initiated in July 1872. Activated on September 5, the new lighthouse, a wooden, framework tower, painted white, exhibited a red light that ranged with the white light atop Racine Harbor Lighthouse to guide mariners into the harbor.

The Lighthouse Board report for 1889 provides the following description of work performed on Racine Harbor Lighthouse and the crib on which it stood.

On September 10, 1888, a contract was made for rebuilding the superstructure of three sides of the crib-work surrounding the keeper's dwelling. The work was begun on September 10, and completed on November 20, 1888. During the progress of the work, the foundation and walls of the building were thoroughly repointed with Portland cement mortar, and after the crib-work was completed, a picket-fence 267 feet long was built on top of the crib-work to prevent the occupants from falling overboard. Extensive repairs were made to the dwelling.

A sixty-foot-deep well was drilled in 1891 to provide the station with water for domestic uses, but the water must not have been good or adequate, as two years later the station was connected to the city water mains.

Between 1893 and 1895, 300 more feet were added to the north pier, making it 1,700 feet long, and a conduit was built on the pier to run a lantern between the old pierhead tower and the outer end of the pier. In 1896, the conduit was taken down, and the pierhead tower was moved to the outer end of the pier. This sixth-order fixed red light was reestablished on June 18, 1896, the same date a bell struck by machinery was placed in operation on the pier.

A new metal pierhead tower, the red one located on the breakwater at Racine today, was established in 1901 atop four concrete piers built into the outer end of the pier. Racine Harbor Lighthouse was discontinued on November 23, 1901, and its fourth order lens was placed in the metal tower. The lantern and deck were removed from Racine Harbor Lighthouse along with its iron stairway, and its tower was capped with a hipped roof. A new wooden staircase was installed in the tower, and the attached dwelling was remodeled to provide an apartment for an assistant keeper on its second story and living quarters for the head keeper on the ground floor and basement.

Racine Pierhead Station and Racine Reef Light Station were consolidated in 1933, when the tender Hyacinth laid 18,000 feet of telephone and control cable between the two stations. Conduits and cable were also run from the inner end of the north breakwater to the dwelling on the north pierhead.

Racine Harbor Lighthouse became part of the adjacent Coast Guard station in 1939. The Coast Guard station was decommissioned in 1971, and its buildings are now part of Pugh Marina. The lighthouse and adjacent old life saving station building were added to the National Register of Historic Places in 1975.

For a larger map of Racine Harbor (Root River) Lighthouse, click the lighthouse in the above map.

From Highway 32 on the northern side of the Root River in Racine, turn east on Dodge Street. When Dodge Street ends turn left onto Michigan Boulevard and then make an immediate right onto Reichert Court. Follow the road to its end, and you will see the light on your right.