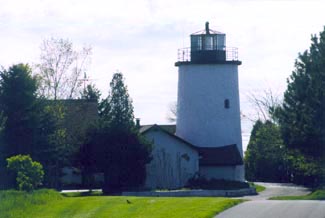 In 1847, James T. Gifford, an investor and former Illinois state legislator, founded a cordwood business at Port Ulao on the western shore of Lake Michigan between Milwaukee and Port Washington. Gifford would purchase felled trees from nearby farmers, mill the trees into cordwood, and then use a system of shoots to deliver the cordwood from the bluff top to the beach, where he would sell it to steamers from his 1,000-foot pier.

In 1850, the State Legislature of Wisconsin presented the following memorial to the U.S. Senate.

That Port Ulao is situated on the western shore of Lake Michigan, twenty-five miles north of Milwaukie, in the county of Washington; that it has a population of two hundred inhabitants, and that its commerce is fast increasing; that within a distance of four miles inland there are four villages with a population in the aggregate of fifteen hundred inhabitants, and that in the vicinity of those inland villages there is water power sufficient to propel one hundred run of stone, which water power is partially improved.

Your memorialists therefore request your honorable bodies to appropriate a sufficient sum to build a light-house and improve the harbor at Port Ulao.

Congress appropriated $3,500 for a lighthouse at Port Ulao on September 28, 1850, and then in lieu of this, allocated $1,000 for a small beacon light on or near the pier at Port Ulao on August 3, 1854. This beacon light was never constructed, and it wasnt long before steamers stopped burning wood. Port Ulao, which was never much more than a pier, was subsequently abandoned.

Amazingly, it seems Port Ulao, now part of Grafton, was destined to have a lighthouse. In 1981, Brana Kevich, an ordained Serbian Orthodox priest, and his wife Neva built a lighthouse home on a bluff overlooking Lake Michigan to fulfill a personal quest to own and live in a lighthouse. The lighthouse, known as Kevich Lighthouse, stands just fifty-feet-tall, but has a focal plane of 163 feet, giving it the distinction of having the highest focal plane of any active lighthouse on the Great Lakes  only Boyer Bluff Light is higher. The U.S. Coast Guard certified Kevich Lighthouse as a Class II Private Aid to Navigation in 1990.

In 1996, Dave and Mary Bennett purchased the lighthouse. We've always been interested in lighthouses, and after a few years of watching the housing market, we kept following this particular property. So we finally made a deal and bought it.

Two metal halide lamps, a 400-watt lamp mounted above a 1,000-watt lamp, were serving as the light source for Kevich Lighthouse in 2006. A shield rotates around the lamps once every eight seconds, creating a signature of four seconds of light followed by four seconds of darkness.

The favorite aspect of their lighthouse home for the Bennetts is its view of Lake Michigan. We love watching the water, seeing how it changes throughout the day, with the sunlight coming off the water, Dave said. We also love watching the boats, like the Great Lakes freighters that pass by, along with pleasure boats and sailboats.

For a larger map of Kevich Lighthouse, click the lighthouse in the above map.

From Interstate 43, take Exit 92 and travel east on County Road Q/Ulao Road. When the road tees, turn left on Lake Shore Road, and you will see the light on your right.