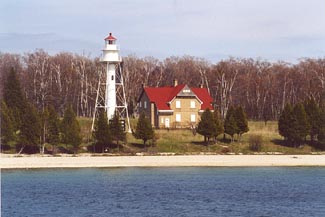 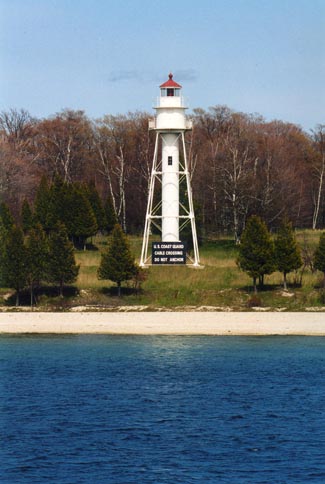 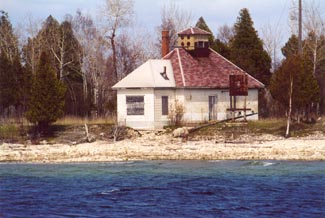 Porte des Morts, or Deaths Door, is a narrow strait separating the tip of Door County Peninsula from a collection of islands that extends north towards Michigans upper peninsula. These islands, which include Plum Island, Detroit Island, Washington Island, Rock Island, St. Martin Island, Summer Island, and Poverty Island, form a dividing line between Green Bay and Lake Michigan, and in 1837 a lighthouse, the first on Lake Michigan, was built on Rock Island to guide vessels through Rock Island Passage. This northern passage was convenient for vessels traveling between the Straits of Mackinac and Green Bay, but as Milwaukee and Chicago grew in importance, traffic from these ports preferred taking the more southerly Deaths Door Passage to Green Bay, as it saved significant time. On August 8, 1848, Congress appropriated $3,500 for a lighthouse to mark Porte des Morts Passage, and later that year President James K. Polk reserved Plum Island, situated on the northern side of the passage, for lighthouse purposes. During 1849, a government crew built a stone tower and dwelling on the southern end of Plum Island, and a light was put in operation that year. William Riggins, accompanied by his wife and three children, took up residence in the lighthouse as its first keeper. It was soon apparent, however, that the light was located too far inside the passage, and in 1858 a lighthouse was built on tiny Pilot Island, situated 1.7 miles to the southeast, and the lighthouse on Plum Island was abandoned.

Even with a light on Pilot Island, mariners still found it difficult to determine the correct turning point for entering Porte des Morts Passage. In 1889, Captain William Nicholson, who regularly sailed between Green Bay and Chicago with the Peshtigo Barge Line, suggested that a pair of range lights be built on Plum Island to indicate the proper bearing for entering the dangerous passage.

The district inspector presented Captain Nicholsons idea to the Lighthouse Board, who agreed with the recommendation and petitioned Congress in 1890 for $21,000 to finance the station. After repeating its request a few times, the Lighthouse Board finally obtained funding for the project in March 1895. By the time specifications and plans were drawn up for the necessary structures and contracts were put out to bid and awarded, it was too late in the season to commence work that year.

On July 28, 1896, the tender Amaranth anchored off Plum Island, and the first workmen and material were landed. R.I. Hurst supervised a crew of thirty men as they cleared areas for the towers and then cut a swath twenty feet wide and sixteen hundred feet long along the western side of the island to connect the two sites. During August, a landing dock was built on the shore near the site of the rear tower, and a 367-foot-long tramway was run between the dock and the dwelling site.

After these preparatory measures, work commenced on the front tower, rear tower, keepers dwelling, fog signal building, boathouse, and oil house. The wooden front tower was originally a two-story structure with a square bottom story and an octagonal second story, similar in design to the front range tower built at Baileys Harbor in 1869. The rear tower, built of iron, consists of a central cylinder containing a circular staircase topped by a watch room and lantern room. The circular watch room has a diameter of eight feet, and the tower measures sixty-five feet from its base to the top of the lantern rooms ventilator ball. Four legs, connected by a network of braces, provide additional support to the tower.

Using some of the 164,000 cream-colored brick delivered to the island, workmen constructed a fifty foot by thirty-two foot, two-story triplex for the keepers. The head keeper occupied the two stories in the southern half of the dwelling, while the first assistant lived on the first floor of the north side with the second assistant above him.

A brick fog signal building was built roughly 1,300 feet northwest of the rear tower, and a dock that extended 210 feet into the lake was built nearby and fitted with pipe to provide water for the duplicate steam-powered fog signals.

Over a half mile of wooden walkways were laid to connect the keepers dwelling with the various outbuildings. The station was declared complete on December 4, 1896, and on March 17, 1897, Martin Knudsen left his position as keeper at Pilot Island to assume command of the new Plum Island Range Lights. His first assistant was Hans J. Hanson, who was formerly the second assistant at Pilot Island, and Knudsen was told to hire a laborer of his choice as second assistant. Knudsen selected George Cornell, a friend and fellow Washington Islander, who proved well suited for the work and was appointed keeper of Racine Reef Lighthouse in 1906, after having served as a first and second assistant at Plum Island.

Following more than a month of preparation, the keepers finally exhibited the range lights on Plum Island for the first time on May 1, 1897. Fixed, red lights were shown from both towers, with the front light using a sixth-order lens, and the rear light employing a fourth-order Fresnel lens manufactured in France by Sautter, Lemonnier, & Co. The front light was visible in a small arc over the range, which had a bearing of 330°, while the rear light shone over an arc of 231° so it could be seen by mariners entering Deaths Door from the west. The rear tower thus served as both a range light and a lighthouse.

The fog signal did not have to be used until May 9, 1897, when its distinct signal of a three-second blast followed by seventeen seconds of silence first boomed out over Deaths Door.

Keeper Knudsen was transferred to Racine Pierhead Lighthouse in August 1899, and Hans J. Hanson was promoted to head keeper at Plum Island. Keeper Hanson exchanged assignments with Charles E. Young, keeper of Menominee Pierhead Light, in 1905. Menominee and Plum Island had another interesting connection, as it was the Ann Arbor Railroad car ferries, sailing across Lake Michigan between Menominee and Frankfort, that dictated the operational season at Plum Island. The station was typically closed from early January through the first part of April.

A telephone cable was laid from Northport across Deaths Door to Plum Island in 1904. Keeper Hanson proudly logged the event on May 20: Communication was had by telephone between Main-Land and Plum today for the first time. In 1906, a work crew built 1,149 feet of fence to enclose the dwelling and nearby outbuildings and replaced the wooden walkways near the dwelling with cement sidewalks. The lengthy wooden walkways leading to the front range and fog signal were repaired at that time but wouldnt be replaced with concrete walkways until later.

In 1931, a new compressed-air fog signal replaced the old steam fog signal. The existing fog signal building was modified to accommodate oil engines, air compressors, and a tyfon fog signal, along with generators for supplying electricity to the range lights. A marker radiobeacon was placed in operation on Plum Island in 1941. Two years later the radiobeacon was increased to a class C beacon.

After World War II, the Coast Guard , which had absorbed the Lighthouse Service in 1939, consolidated its operations on Plum Island. The range lights were automated, the keepers dwelling boarded up, and a crew living at the life saving station on the other side of the island was given charge of the lights and fog signal. A wooden watch room was added to the brick fog signal building during this period.

The original front range tower was replaced in 1964 by a steel skeletal tower. Unnecessary and falling into disrepair, the stations barn, oil house, privy, boathouse, and docks were demolished. The fog signal was discontinued in 1975, leaving only the range lights to serve marines. The Coast Guard abandoned the life saving station in 1991, moving its operations to Washington Island. After being used as a base for helping mariners for more than a century, Plum Island was left uninhabited.

In October 2007, Green Bay National Wildlife Refuge was enlarged to include Plum and Pilot Islands, and control over the island was transferred from the Coast Guard to the U.S. Fish and Wildlife Service. Under the leadership of Tim Sweet, The Friends of Plum and Pilot Island was formed in 2007 to work with the USFWS in preserving the historic structures on Plum Island that are now listed on the National Register of Historic Places. In 2010, the volunteer group repainted the boathouse, which it is hoped will one day serve as the visitors center for the Green Bay National Wildlife Refuge.

In 2015, the Fresnel lens used in the lantern room of Plum Island Rear Range Lighthouse was removed and, after being restored, was placed on display at Door County Maritime Museum's northern museum site in Gills Rock.

For a larger map of Plum Island Rear Range Lighthouse, click the lighthouse in the above map.

Plum Island Rear Range Lighthouse can be seen from the Northport - Washington Island ferry. Excursions that pass by the island are offered during the annual Lighthouse Festival sponsored by Door County Maritime Museum, and by Shoreline Charters in Gills Rock.

The lighthouse is owned by the U.S Fish and Wildlife Service. Grounds/dwelling/tower closed.