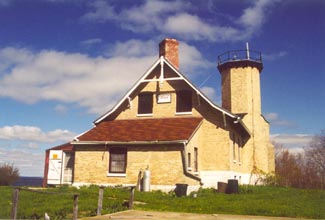 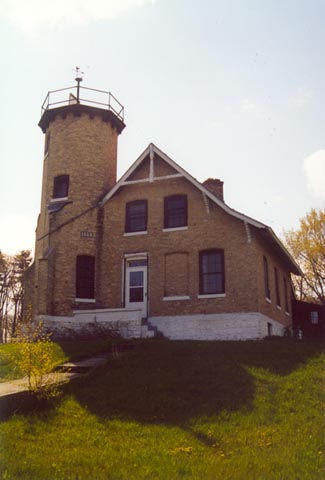 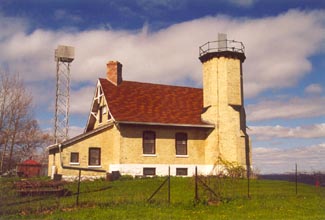 Chambers Island, the largest island in Green Bay, received its name in 1816 when Colonel John Miller sailed by on his way to construct Fort Howard at the mouth of the Fox River and named the island after Colonel John Chambers, his second-in-command. After his tour of the Great Lakes in 1837 to determine a systematic arrangement of lighthouses, G. J. Pendergrast included the following on Chambers Island in his report to the Board of Navy Commissioners: This island is exactly in the track of vessels, and as there are shoals, reefs, and small islands, scattered about in all directions near it, I am persuaded a light at this place would be of great utility.

Congress had appropriated $5,000 on March 3, 1837 for a lighthouse at the entrance of Green Bay, and while another light to mark Deaths Door was needed in addition to the lighthouse then under construction on Pottawatomie Island, Pendergrast felt the appropriation should be used for a light at the head of the bay.

A special committee of the Lighthouse Board was sent to the Great Lakes in 1865 with a charge to ascertain the needs of commerce in Green Bay, and as a result an estimate was submitted to cover a lighthouse on Chambers Island, range lights at the entrance to the Fox River, and a beacon on Peshtigo Reef. Congress appropriated $25,000 for the projects on July 20, 1866, and later that year Colonel W. F. Raynolds selected a peninsula on the northwest side of Chambers Island as the site for the lighthouse. Lewis and Anna Williams deeded thirty acres of land on the peninsula to the federal government in exchange for $250.

The steamer Rocket landed a construction crew from Detroit on Chambers Island in early June of 1868, along with a large quantity of cut stone, bricks, lime, and lumber. Chambers Island Lighthouse was built the same year as nearby Eagle Bluff Lighthouse, and both structures consist of a one-and-a-half-story dwelling and an attached kitchen built of cream-colored Milwaukee brick. The only major difference between the two lighthouses is that a square tower was used at Eagle Bluff, while on Chambers Island, the first two stories of the tower are square with buttressed corners and the upper portion is octagonal. The dwelling originally had five rooms, a pantry, and a closet on the first floor, and two rooms and a closet on the second floor. The fifty-five-step cast-iron stairway in the tower is the only means of accessing the second floor.

A decagonal lantern was placed atop the tower to house a revolving fourth-order Fresnel that produced a white flash every sixty seconds. The tower measured forty-four feet nine inches from its base to the center of the ventilator ball atop the lantern room, and the light had a focal plane of sixty-eight feet. In addition to the lighthouse, the station was originally equipped with a wooden boathouse and outhouse.

Lewis S. Williams, who sold the land for the lighthouse, was appointed its first keeper, and he made the inaugural lighting on October 1, 1868, less than four months after the construction crew had arrived on the island. Williams was forty-eight when he became keeper and had been living on the island since the early 1850s. He and his wife had eleven children, one of whom was born after Williams received his appointment.

The area around Chambers Island was known for its strawberries. The small islands to the east of Chambers Island were known collectively as the Strawberry Islands, while the channel that ran along the east side of Chambers Island was known as Strawberry Passage. Keeper Williams cultivated a large strawberry patch near the lighthouse that was admired by many visitors who came to picnic on the island during the summer. Twelve residents of Menominee visited the island in 1875 and were treated to strawberry pie and strawberries and cream by Keeper Williams, who afterward gave the group a short tour of the island that included a stop at his strawberry patch. One of the visitors recalled, We had heard fabulous stories about this patch before, but were not prepared for the sight that met our gaze. The ground was literally red and it was impossible to step out without treading on them.

During the winter, Chambers Island could easily be accessed with a horse and sleigh, but this method of traveling could be perilous. In January 1875, one of the Williams sons set out for Eagle Harbor with a companion. About two miles out they came upon a crack in the ice that was about a foot wide. They got out and safely led the horse over the crack only to discover that the crack had recently been much wider and that they were standing on thin ice. The horse broke through the ice, and the two men narrowly escaped plunging into the water themselves. Having lost their horse, the men were forced to walk the rest of the way to Eagle Harbor.

Keeper Williams retired in 1889, after having served twenty-one years at the lighthouse. Seven other men served as head keeper of Chambers Island Lighthouse until the Coast Guard took control of the lighthouse, but none of them matched Williams lengthy stay at the lighthouse. Only Jens J. Rollefson, who served from 1906 to 1925, came close. In 1916, Keeper Rollefson and his assistant Edward Ledwell were recognized for giving food and clothing to three shipwrecked sailors whose motorboat was destroyed by fire and for taking the men to Marinette, Wisconsin.

In 1891, a forty-five-foot-deep well was driven, and above it an open-frame tower topped with a ten-foot windmill was constructed to pump water into a new 2,250-gallon tank where it could be used for domestic purposes or to fight fires. The boathouse was also moved sixteen feet nearer the lakeshore, and a new landing crib and boatways were provided. Materials were also landed for building a two-story barn. Six years later, a new well was sunk, a woodshed was built, the boathouse was moved another seventy-five feet closer to the water, and a 1,600-foot-long wire fence was put up to enclose the station. A year later, in 1898, a brick oil house and a summer kitchen were built, and the windmill and water tank were taken down and stored as the well was of no use.

In 1899, a fourth-order Fresnel lens, manufactured in 1892 by F. Barbier & Cie., was substituted for the fourth-order lens formerly used at Chambers Island. The new lens had three fixed-panels and three bulls-eye-panels and revolved in a mercury float once per ninety seconds. The lights new characteristic, a white flash every thirty seconds, made its debut on July 15, 1899. The weights that powered the clockwork mechanism for revolving the lens had to be wound up every five hours.

The following incident, recorded in the Lighthouse Service Bulletin of February 1931, occurred when Claude Chapman was serving as head keeper and Theodore Jacobsen as assistant:

When a report had been received that acetylene winter light placed at Chambers Island Light Station, Wis., was not burning, the keepers journeyed 30 miles by automobile and then traversed 7 miles of ice on skis, tying themselves together with a long rope in case either fell through the ice. Unusually mild weather conditions have prevented heavy ice from forming and have increased the hazards of such a journey. The thickness of the ice was found to be from 1 to 4 inches. The first attempt to reach the station failed when a snowstorm set in.

Alfred Cornell was transferred from Green Island Lighthouse when it was automated in 1933 to Chambers Island Lighthouse. Keeper Cornell retired on December 1, 1941 and was replaced at Chambers Island by Theodore Jacobsen, his assistant. A marker radiobeacon was established on the island in 1947. In a cost-saving move in 1955, the Coast Guard automated the light and removed the landing pier and boatways. The lighthouse was subsequently rented to Edwin Fitzgerald who owned the property south of the station.

The lantern room was removed from the tower in 1958, and the Fresnel lens was purportedly sold at a surplus property auction to Harold Warp of Chicago. A short skeletal tower supporting an automated beacon was then installed atop the tower. This served as the light until the Coast Guard erected a tall, ninety-seven-foot-tall skeletal tower near the oil house in 1961.

All of the light station property on Chambers Island, save a small parcel on which the skeletal tower stood, was deeded to the Town of Gibraltar for park purposes on March 10, 1976. The park opened the following year, and for over thirty-five years Joel and Mary Blahnik served as caretakers, living in the lighthouse during the summer. A prolific composer, Joel served as a music educator in the Wisconsin Public Schools for thirty-three years and has been a Coast Guard certified captain since 1965.

For a larger map of Chambers Island Lighthouse, click the lighthouse in the above map.

The lighthouse is owned by the Town of Gibraltar. Grounds open, dwelling/tower closed.