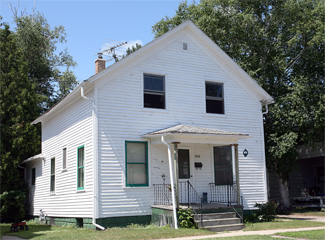 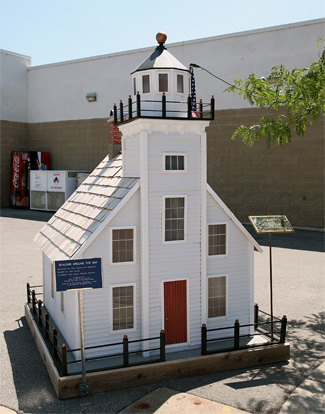 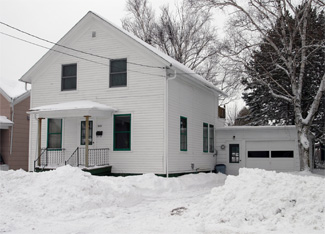 Depending on the level of Lake Michigan, Dunlap Reef may protrude above the surface of Sturgeon Bay or lurk a few inches below it. Situated just north of the Michigan Street bridge in downtown Sturgeon Bay, Dunlap Reef is roughly a half-mile long and was first marked in 1873, when the Lighthouse Board placed buoys at each end of the shoal.

With the nearing completion of the Sturgeon Bay Ship Canal, the Lighthouse Board established a pair of range lights on the reef in 1881. After title for the reef and plans for the lights were approved, work commenced on quarrying stone to be used as ballast in the wooden cribs that would serve as the foundations for the lights. The front crib, measuring roughly sixteen feet square, was positioned on the reef 680 feet north of the rear crib, which was twenty-four feet by thirty-six feet.

A wooden octagonal pyramidal tower, fourteen feet tall and attached to a storehouse, was constructed atop the front crib, and a two-story frame dwelling with a square tower rising from the northern gable of its pitched roof was built on the rear crib. An octagonal lantern was placed atop both towers. The focal plane for the front light was eighteen feet, while that of the rear light was thirty-nine feet.

After having resigned his position as county circuit court clerk, Henry C. Graham, a Civil War veteran, moved his wife and three sons from Egg Harbor to Dunlap Reef, where he exhibited the lights for the first time on October 15, 1881. One winter in the dwelling on the small crib was enough to convince the Grahams that a second home on shore was necessary.

In 1883, a crib, twelve feet wide and twenty-two feet long with a six-foot-wide slip for hauling out the stations rowboat, was built and sunk just south of the rear crib. While this improvement helped Keeper Graham land his boat, it still left the boat exposed to the elements. During a storm that November, the spray from the waves in the bay coated the crib and the boat in a thick layer of ice, making it difficult to reach his boat, let alone use it to access the front light. The local paper thought the Lighthouse Board should build an elevated walkway between the two towers, but instead a new fourteen by twenty-four foot crib, roofed over and enclosed, was provided in 1888 to serve as a boathouse and woodshed.

Keeper Graham resigned in 1885 and was replaced by Joseph Harris, Jr., who had started his career at Baileys Harbor Range before serving at Green Island, Wisconsin and Grosse Point, Illinois. Minding the Dunlap Reef Range Lights didnt occupy all of Harris time, as just a month after moving to Sturgeon Bay an advertisement in the Advocate announced the keepers second job: Joseph Harris, Jr. Builder and Designer of Canoes, Sailing Boats, and Rowing Boats. Harris built a rowboat with great stability for his own use at Dunlap Reef. Lighthouse officials were so impressed by the design that they ordered a substantial number of the boats for use at other stations.

In 1888, a Berry combination gas machine was placed in the front range tower to supply gas for illumination. This new light went into service on November 7 and reduced the number of trips Keeper Harris had to make to the front light from twice each day to just once a week. Harris resigned from the service in 1890 after being appointed Sturgeon Bay Postmaster, a higher-paying job than lighthouse keeper. He lost this political appointment in 1893, when President Benjamin Harrison failed to win re-election, but later entered politics himself, serving as mayor of Sturgeon Bay.

Clifford Sanderson, who had served as an assistant keeper to his father William at Cana Island from 1884 to 1889 before being transferred to Cedar River, Michigan, succeeded Harris. In July 1890, shortly after Sanderson arrived at the station, the front range tower was painted red so it would better show up in daytime against the white dwelling at the rear range. The color of the lights themselves was changed from fixed white to fixed red in 1907 to prevent confusion with residential lights in Sturgeon Bay.

The Bureau of Lighthouses replaced the Lighthouse Board as the agency responsible for the countrys lighthouses in 1910, and two years later it recommended that two structural steel towers be placed on Hills Point to replace the Dunlap Reef Range Lights, which no longer marked the proper channel. For some reason, this change was not made, but in 1921, the Bureau noted the Dunlap Reef Lights were obsolete as to position and in an advanced state of decay. The Bureau requested $49,000 to establish new navigational aids for Sturgeon Bay, and the Dunlap Reef Range was discontinued at the opening of navigation in 1924.

After thirty-three years at Dunlap Reef, Clifford Sanderson was appointed keeper of Cana Island Lighthouse on April 29, 1924. Sanderson would serve for nine years at Cana Island, the station where had begun his lightkeeping career and where his father had served for fifteen years. Dunlap Reef Light was established on September 2, 1924 as part of the new lights that guided mariners through Sturgeon Bay. The Lighthouse Service Bulletin for December 1925 provided the following description of this new light:

An economical form of construction was used by the twelfth lighthouse district in the establishment of a fixed structure on Dunlap Reef, Sturgeon Bay, south end of Green Bay, Lake Michigan, which it was necessary to rebuild in the rearrangement of aids to navigation in Sturgeon Bay. In constructing the foundation use was made of an old steel tank about 9 feet in diameter, used at Charlevoix Depot. Plates were added to this tank to increase its height to 16 feet, and it was then secured to a grillage 13 feet square, made up of timbers and I beams, with bolts extended through the grillage to the top of the tank. After assembling above water the whole structure was lowered by a derrick to the bottom at the site, the tank filled with concrete, and riprap placed outside its base. A skeleton steel tower, tank house, and flashing acetylene light were placed on this foundation, making a very economical and practical structure well adapted for its situation.

The lighthouse that had served as Dunlap Reef Rear Light for forty-two years was sold to Ruben Dickenson, moved ashore, and, minus its lantern room, has since served as a private residence in Sturgeon Bay. A skeletal tower that marked Dunlap Reef after the 1924 tower now stands on the grounds of the Door County Maritime Museum in Sturgeon Bay.

In 2006, lighthouses adorned several streets in Sturgeon Bay as part of Beacons Around The Bay. The model of Dunlap Reef Lighthouse shown to the left was created by Jean Austad and auctioned off to benefit the Door County Maritime Museum.

At a meeting of the Sturgeon Bay City Council held on August 17, 2010, the local arts board recommended that a replica of Dunlap Reef Lighthouse be built to replace an aluminum ships hull located near the Door County Maritime Museum.

For a larger map of Dunlap Reef Rear Range Lighthouse, click the lighthouse in the above map.

From the northern end of the Michigan Street bridge in Sturgeon Bay, go north to Third Avenue and turn right. Turn left at Oregon Street and then right onto Fourth Avenue. The keeper's residence or Dunlap Rear Range Light will be on your right.