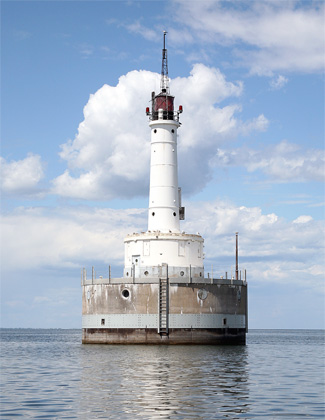 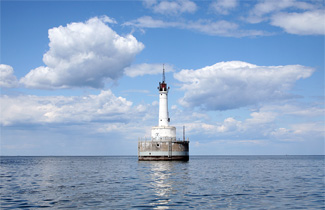 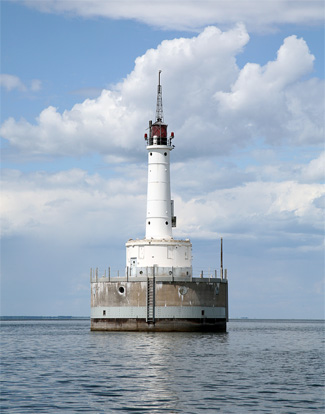 Plans and specifications for a light and fog signal on a submarine foundation to mark the entrance to Green Bay were begun in 1934, and work on a circular pier with a diameter of fifty feet soon commenced at the old St. Paul dock on South Adams Street in Green Bay. To construct the pier, an octagonal timber grillage was first built of twelve-by-twelve-inch timbers to a height of twenty-four inches. Atop this base, steel forms for creating a three-foot-thick circular wall of concrete were assembled to a height of thirty feet, and inside this a heavy timber crib was constructed. After dredges had spent some time preparing the bottom of the bay, the pier was towed out into Green Bay in the afternoon of June 5, 1935 and then sunk in position that evening in water that was twenty-four feet deep. The following morning, the self-unloader Paisley of the Valley Camp line poured 5,000 tons of crushed stone from Port Inland, Michigan into and around the crib, filling the crib to one foot below water level. A two-foot-six-inch reinforced concrete slab was placed over the crib at the water line, and from here the circular, concrete walls rose another eighteen feet to create a basement within the pier for machinery and storage.

The lighthouse resting atop the pier has a circular base of a smaller diameter than the pier and is topped by a cylindrical tower. The first story of the lighthouses base is concrete and is interrupted by portholes that provide light for the basement story within the pier, while the second story is a steel structure lined with masonry. The conical steel tower is surmounted by a lantern room that has a focal plane of seventy-two feet, and atop this a skeletal structure for a radiobeacon projects skyward.

When the light was activated in 1935, a fourth-order Fresnel lens was used in the lantern room to project a fixed red light of 6,000 candlepower. The light and radiobeacon were powered by electricity supplied by a diesel generator coupled to a bank of storage batteries. The resonator for the fog signal was mounted in the cylindrical tower and was supplied with compressed air from oil-engine-driven compressors located in the machinery room. A crane operated by compressed air was mounted on the pier to handle the stations boat. The total cost of the offshore station came to $108,447.

Theodore Grosskopf was serving as the head keeper at the lighthouse in 1943, when on Friday, December 10, bad weather prevented him and his three subordinates from being taken off the station at the end of the shipping station. By Sunday the men had run out of food, and they remained in this perilous condition until a plane was able to drop supplies to them on Tuesday from a height of above fifty feet. The following day, John Paetschow, keeper of Manitowoc Breakwater Lighthouse, led a party of three coastguardsmen from Two Rivers to rescue the men. Using a skiff, the four men covered the four miles out to the lighthouse over ice that ranged from six inches to just one inch in thickness. They reached the light at 4 p.m. and returned safely to shore an hour later.

After the Coast Guard took charge of the countrys lighthouses in 1939, Green Bay Harbor Entrance Lighthouse was typically staffed by a couple of coastguardsmen who lived in the circular portion of the tower, serving alternating duties of two-weeks-on and two-weeks-off. The station was automated in 1979. Today, the lighthouse displays an occulting red light with a four-second period, and the fog signal sounds a two-second blast every fifteen second when needed during the navigation season that runs from April 1 to November 1.

Green Bay Harbor Entrance Lighthouse is located roughly nine miles from the mouth of Fox River and marks the west side of the entrance to the dredged channel that leads to Green Bay. You can check the current conditions at the light by clicking here.

For a larger map of Green Bay Harbor Entrance Lighthouse, click the lighthouse in the above map.

This light is best seen by boat or from the air. We chartered a plane with Orion Flight Services out of the airport near Sturgeon Bay for the aerial shot.