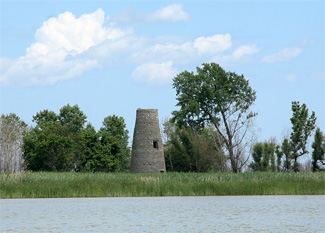 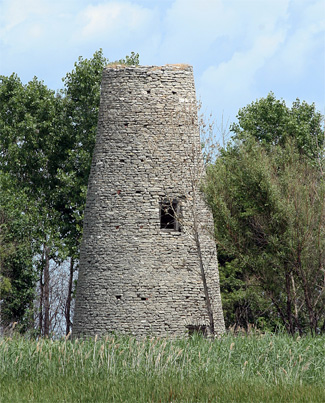 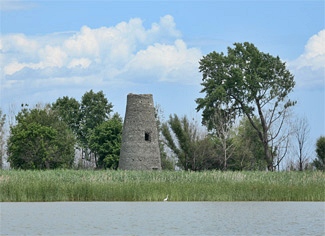 Lieutenant G. J. Pendergrast was appointed by the Board of Navy Commissioners in 1837 to examine the eligibility of proposed lighthouses on the Great Lakes. Congress had appropriated $5,000 on March 3, 1837 for erecting a lighthouse at the entrance of Green bay, but Pendergrast noted that the lighthouse under construction on Pottawatomie Island fulfilled this purpose. While a lighthouse was needed at Deaths Door, a second entrance to Green Bay used by vessels coming from the southern portion of Lake Michigan, Pendergrast concluded that there were stronger reasons for erecting a lighthouse at the head of the bay, near the mouth of the Fox River, and recommended the center of Grassy Island as the most eligible place. James T. Homans, another Lieutenant in the Navy, visited Grassy Island the following year and reported: This island was carefully examined by me during my stay there, and decided to be unsuitable for construction of buildings upon it of any durability, and totally uninhabitable by a keeper, being nearly under water, from the great rise of the lake, since the recommendation for a light upon it was made. Homans recommended that instead of Grassy Island, located about a mile and half north of the mouth of the Fox River, the lighthouse should be placed on Tail Point, another two miles to the north.

For some reason, Congress did not allocate money for Tail Point Lighthouse until 1847, when it appropriated $4,000. Resembling a horses tail, Long Tail Point is a detached sand spit that extends southeast into Green Bay for over two-and-a-half miles from a point near the mouth of the Suamico River. Work on Tail Point Lighthouse began in 1847 using pieces of limestone that were picked up along the eastern shore of Green Bay near Bay Settlement and then transported to Tail Point aboard 100-foot, hand-poled scows.

The walls of the tower were four-feet-eight-inches thick at the base, where the diameter was fourteen-feet-seven-inches, and tapered to a thickness of two-and-a-half-feet at the lantern room. The tower stood fifty-one-and-a-half feet tall from base to ventilator ball and was topped by a birdcage lantern room from which the light of nine lamps set in fourteen-inch reflectors was exhibited at a focal plane of fifty-six feet. Nearby, a one-and-a-half-story, five-room, stone keepers dwelling was built. This residence measured thirty by twenty feet and had an attached ten-foot-square kitchen. The tower and dwelling were both painted white, and Peter White, Tail Points first keeper, activated the station in 1848, the same year Wisconsin attained statehood.

In 1856, when Thomas Atkinson was serving as keeper, Tail Point Lighthouse was refitted with a new octagonal lantern room and a sixth-order Fresnel lens. By 1859, the lake level had risen, surrounding the stone tower with water. Afraid that the conical tower might be undermined, the Lighthouse Board had a new two-and-a-half-story lighthouse constructed on higher ground a short distance to the east. Rather than a stone structure, which was found to not stand well on the sandy soil of Tail Point, the new lighthouse was built of wood on ground-sills that rested on iron piles, eight feet apart.

Similar to other lighthouses built at this time, the second Long Point Lighthouse resembled a schoolhouse, with a square tower rising from one end of its pitched roof. The lantern room and lens were transferred from the old lighthouse to complete the new one. At some point later, a fourth-order Fresnel lens was installed in the lantern room.

A 147-foot-deep well was drilled in 1883 and lined with a four-inch iron pipe. Water, described as soft and pure, flowed continually from the well. On April 22, 1890 a fog bell was contracted for Long Point and a striking apparatus was ordered. After the steam barge Ruby delivered materials to the station, the wooden fog bell tower was completed by the end of June, and the bell, which was struck one blow every ten seconds, was placed in operation on July 5, 1890. Some 246 feet of wooden walkway, two feet wide and two feet high, was built across the swamp from the lighthouse to the fog bell tower. During its first year, the bell was tolled for 100 hours.

In 1894, the Lighthouse Board noted that the fog bell at Long Point was of little or no benefit, as it was so far from the channel that it could only be heard in the stillest of weather and then only if the was blowing from the right direction. Mariners recommended that the bell and lighthouse be placed upon a crib, 1,050 yards southeast of the present location of the light, where a red can buoy was then in service. The Board requested $7,500 to enact this plan, but Congress did not respond with an appropriation until July 1, 1898.

Work commenced on the project on April 15, 1899, when a wooden crib was sunk at the site and then topped by a cement pier. Rather than relocate the wooden 1859 lighthouse from the point, it was retained as a dwelling, and a square, frame, one-and-a-half-story lighthouse was built atop the offshore pier. The buff-colored lighthouse had a red hipped roof, with a dormer window in each of the four faces, and atop the flat, central part of the roof was mounted a round, helical-bar lantern room. The new light and fog-bell were activated on August 1, 1899. No longer needed, the wooden bell tower from Long Point was relocated to Michigans Sand Point Lighthouse.

Captain George Gaylord, a native of Ohio, was appointed keeper of the lighthouse in 1880, after having sailed on the Great Lakes for nearly forty years. He made his first voyage to Green Bay in 1861 and relocated his family there seven years later. As a master of both steam and sailing vessels, Gaylord had loaded and discharged freight at every port between Green Bay and Buffalo. After nineteen years as keeper of Tail Point Lighthouse, George Gaylord was forced to retire in June 1899 by a fatal malady in the form of a cancerous growth on the lower part of his face. Roughly two weeks after retiring and less than two months before the third Long Point Lighthouse was activated, Gaylord passed away at the age of seventy-two.

In 1911, the fog bell at the third Long Point Lighthouse was replaced by a five-inch compressed air fog signal that sounded a two-second blast in every twenty seconds as needed. Carl Witzmann was keeper of the light in 1919, when he and Andrew Weber, his assistant, rescued three men who had taken refuge on a raft after their vessel, the motorboat G. F. Laviolette, had capsized and sunk.

In October 1929, a ferocious storm caused extensive flood around Green Bay. Keeper Witzmann fled the dwelling on Long Point as the foundation crumbled. With a signal lantern in hand, he hurried to the highest place on the island and signaled for help. After three hours, the tug Greiling spied his signal and rescued the exhausted keeper. Witzmann said the storm was the strongest he had seen in his thirty-one years as keeper. Before being appointed keeper of Tail Point Lighthouse in 1920, Witzmann had spent the previous elven years as an assistant keeper at Manitowoc, Frankfort, and then Sturgeon Bay Ship Canal.

Andrew Weber served as assistant keeper of Long Tail Point Lighthouse from 1911 to 1935 and raised three children during this period with his wife Alice. Alice Weber was introduced to painting by a grade school teacher, but it wasnt until 1933 that a doctor suggested she occupy her time with art while recuperating from an illness. She then took weekly lessons from Sister Cassiana at the St. Joseph Academy in Green Bay and honed her skills.

Head of Swine, one of Alices paintings, has an interesting backstory. She visited the butcher and told him she wanted a hogs head to paint. Why on earth do you want to paint a picture of a pigs head? the butcher asked, and Alice replied, I think it is a very interesting object. Did you ever notice the smile on a pigs head? The butchers delivery boy transported the head out to the lighthouse, and Alice paid him two dollars to take it back after she had painted it. Alice was well enough known to be included in a book on states rural artists published in 1941 by the University of Wisconsin.

When Tail Point Lighthouse was automated in 1936, the 1859 keepers dwelling was no longer needed. The residence was sold to a private individual with the stipulation it be removed, as the surrounding land had become the Long Tail Point Migratory Waterfowl Refuge just that year. While the house was being relocated that winter, the trailer it was on broke through the ice up to its axles. The dwelling was dismantled on the spot, and the lumber later used to build a silo on a farm in Suamico.

On April 9, 1973, a powerful storm packing winds of up to seventy miles-per-hour created twelve-foot waves that destroyed the 1899 Tail Point Lighthouse.

In the early 1870s, the government had given the 1849 stone lighthouse on Long Tail Point to William Mitchell, a former keeper, who wanted to reuse the stone from the tower. Mitchell soon discovered the tower was impervious to bar and pick and abandoned his efforts. The government planned to demolish the stone tower itself in the early 1900s, but Commodore Arthur C. Neville and Judge Carlton Merrill successfully petitioned Washington to save the landmark. Ironically, the first of three Long Point Lighthouses is the only one that remains standing. A modern light, known as Light 18, marks the tip of Long Point today.

Located on Long Tail Point, which projects into the western side of Green Bay, roughly four miles from the city of Green Bay. The lighthouse is in the Long Tail Unit of the Green Bay West Shores Wildlife Area.
Latitude: 44.5959, Longitude: -87.98349

For a larger map of Long Tail Point Lighthouse, click the lighthouse in the above map.

The remains of Long Tail Point Lighthouse are best seen by boat or from the air. We chartered a plane with Orion Flight Services out of the airport near Sturgeon Bay for the aerial shots.

The lighthouse is owned by the Wisconsin Department of Natural Resources. Grounds open, tower closed.