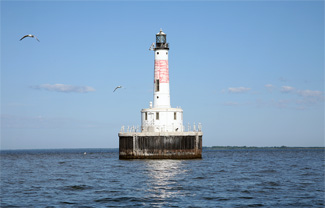 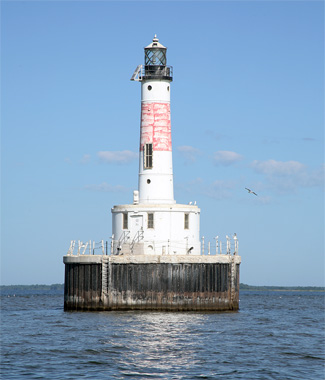 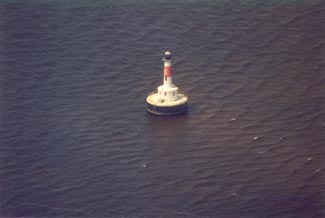 Peshtigo River empties into Green Bay at a point eight miles south of Marinette, Wisconsin. From the north side of the river, a shoal or reef projects into the bay roughly four miles and presented a significant obstacle for mariners. This submerged obstruction was not easy to mark, and over the years a day beacon, a lightship, and the current lighthouse have all served for lengthy periods to alert mariners of the dangerous reef. In 1865, a special committee of the Lighthouse Board was dispatched to the Great Lakes to ascertain the needs of commerce, with a charge to pay particular attention to Green Bay. As a result, a lighthouse for Chambers Island, range lights at the entrance to the Fox River, and a beacon for Peshtigo Reef were recommended. On July 28, 1866, Congress approved $25,000 for additional aids to navigation in Green Bay, including a light-house on Chamberss island and a beacon on Peshtigo shoal.

After Chambers Island Lighthouse was completed in 1867, $10,000 of the appropriation remained for Peshtigo Reef, and the Lighthouse Board had plans drawn up for a day beacon. Completed by June 1870, this beacon was described by the Board as consisting of a wooden crib 30 feet square, surmounted by a pyramdical [sic] skeleton tower, upon which is placed an iron cage.

In 1892, the Lighthouse Board noted that the large and important commerce of the vicinity had for many years been inconvenienced by the lack of a reliable mark on Peshtigo Reef and recommended that $10,000 be allocated for a light and fog signal. An act in February 1893 authorized the light and fog signal but made no appropriation. After requesting funds in 1893 and 1894, the Board apparently reconsidered the project. In 1898, the Lighthouse Board stated that marking the reef with a buoy was difficult as the water deepened rapidly at the twelve-foot line and acknowledged that establishing a lighthouse on the reef would be a dangerous experiment, due to the tremendous push of floating ice in the vicinity. Instead, the Board requested $15,000 for a lightship.

After the Lighthouse Board repeated its request for a lightship for Peshtigo Reef each year, Congress finally appropriated $15,000 for the vessel on June 28, 1902. Johnson Boiler Co. built lightship No. 77, a steel-hulled vessel with a length of seventy-five feet and beam of twenty-one-and-a-half feet, at Ferrysburg, Michigan in 1905 under a contract for $13,950. The lightship was delivered by the contractors to Sturgeon Bay in November 1905 and was placed on station on April 28, 1906.

Lightship No. 77 had four staterooms, a bathroom, and a galley and was equipped with a hollow steel mast from which a light was shown from three oil lens lanterns. In times of low visibility, the crew would ring a fog bell by hand up until 1911, when the vessel was equipped with a compressed air fog signal. The lightship was absent from its station from August 18 until September 16 so an eight-inch chime whistle could be installed, and a gas bell buoy was used to mark the reef during this period.

In 1923, the Commissioner of Lighthouses noted that Peshtigo Reef was in the direct line of the heavy coal traffic, amounting to 850,000 tons, making its way to and from Green Bay City. As the lightship was unable to mark the reef in early spring and late fall due to ice conditions, the commissioner stated that the coal traffic fully warrants the construction of a fixed station on crib at this point, replacing the vessel.

Evidence that Peshtigo Reef needed to be marked year-round was the grounding of the steamer Jupiter on the reef in late November 1914, just days after Peshtigo Reef Lightship was withdrawn for the season and taken to Sturgeon Bay. The Jupiter was loaded with 6,000 tons of coal and was bound from Green Bay to Buffalo when it struck the reef in a dense fog.

The Bureau of Lighthouses requested $183,700 in 1924 to begin the work of replacing the Lake Michigan lightships at Lansing Shoal, North Manitou Shoal, and Peshtigo Reef with light and fog signals on fixed cribs. Plans and specifications were finally drawn up for Peshtigo Reef Lighthouse in 1934, and work on the foundation crib began later that year. Love Construction Company of Muskegon received the construction contract for the lighthouse after placing a bid of $31,800 for the necessary labor. The government provided the materials and equipment for the project.

The following description of Peshtigo Reef Lighthouse was given in the important works completed section of the 1936 Annual Report of the Commissioner of Lighthouses.

This station constructed near the outer end of Peshtigo Reef in 10-foot depth and placed in full commission on May 6, 1936, replaces Peshtigo Reef Lightship which has been discontinued, resulting in a material decrease in maintenance cost as well as providing a more effective aid to navigation.

The pier supporting the superstructure is cylindrical, 50 feet in diameter and constructed of interlocking sheet-steel piling braced at the water line by a circumferential girder which is in turn braced by cross ties and by rods anchoring it back to five cylindrical piers within the enclosure which support the lighthouse proper. These five inner piers are 6 feet in diameter and are supported on wood bearing piles.

Inside of the ring of sheet piling, steel-encased H-beams bearing piles have been driven spaced at approximately 9-foot intervals and supporting the outer edge of the basement floor and the outer edge of the deck of the pier, which is of reinforced concrete. The pier itself is filled with stone ballast and a thick mat of riprap extends for some distance around the pier to prevent erosion.

The outer portion of the basement is utilized for storage, etc., and the inner portion under the tower proper is a machinery room, lighted through posts built into the circular lower base, which is of concrete and which projects above the deck level. Where the basement joins the sheet pile wall, the latter is backed up with hollow-tile masonry.

The superstructure consists of a cylindrical steel tower, the first story of which is 25 feet in diameter, providing living quarters for keepers. The remainder of the tower is conical, housing the compressed-air diaphragm type of fog signal and supporting a special lantern of the helical-bar type in which is housed the illuminating equipment. A fixed white electric light of 26,000 candlepower shines from a fourth-order lens.

The station power plant, consisting of two gasoline-driven 5-kilowatts generators and storage batteries, supply power to the light and electric air compressors which supply air for the diaphragm fog signal. Current is also supplied to a fog bell which is operated continuously.

While this station has accommodations for keepers suitable for use in emergency, it is not operated as an attended station but is remotely controlled by radio from Sherwood Point Light Station some 8 ½ miles distant. The light operates automatically by time switch, but the electric generators are started and stopped at will from the shore station through radio control. The continuous operation of the fog bell is an insurance against any interruption of the radio control, and the latter is installed completed in duplicate, using a separate wavelength for each complete control channel. The method of control used is that which has been in successful operation at Fourteen-Foot Shoal Light Station for a number of years and for the last 2 years has been in service controlling Lake St. Clair Lightship.

A radiotelephone transmitter at Sherwood Point provides the control and a similar transmitter at the Peshtigo Reef Station provides communication with the shore when attendance or tests are in progress. The two keepers of Sherwood Point Station visit the Peshtigo Station at periodical intervals for a general check-up on the mechanical equipment of the station. The total cost of the station was $80,710.17.

For a larger map of Peshtigo Reef Lighthouse, click the lighthouse in the above map.

Peshtigo Reef Lighthouse is best seen from the water or air. We chartered a plane with Orion Flight Services out of the airport near Sturgeon Bay for the aerial shot.