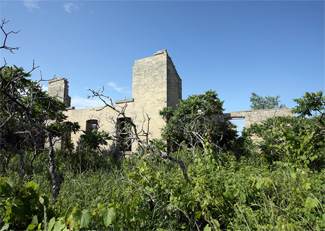 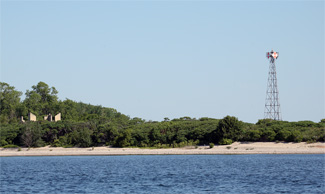 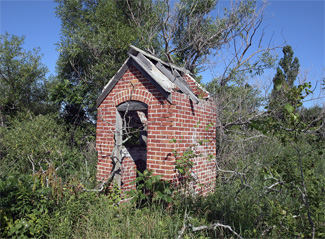 Green Island is a crescent-shaped, eighty-seven-acre island located roughly five miles off the mouth of the Menominee River and near the main Green Bay shipping channel. The 1840s saw a great expansion in the lumber industry at Marinette, Wisconsin and Menominee, Michigan, prompting the need for a navigational aid in the area, and Green Island was a good candidate as shoals extended from the island for some distance, threatening mariners. In February 1858, Charles Billinghurst presented a petition from the citizens of the State of Wisconsin to the U.S. House of Representatives, praying for the establishment of a lighthouse on Green Island. Congress appropriated $6,000 for the project on March 3, 1859, and on April 2, 1860 the State of Wisconsin passed an act authorizing the governor to seize and take possession of certain land on Green Island for the use of the state, to cede to the United States, to erect and maintain a light house thereon. Green Island was surveyed on September 12, 1860, and five stone monoliths were used to mark the borders of a 1.998-acre parcel reserved for the lighthouse. Peter McBride had been issued a land patent on March 2, 1854, making him the owner of Green Island, and he was paid $39.96 for the 1.998 acres.

Green Island Lighthouse consisted of a two-and-a-half-story dwelling built of Milwaukee brick with a square, wooden tower mounted atop the southern end of the dwellings pitched roof. The dwelling had five rooms and three closets on the first floor, and four rooms and two closets on the second floor. The tower was topped by a cast-iron lantern room from which a fixed white light was shown from a fourth-order Fresnel lens at a focal plane of fifty-five feet. Other outbuildings at the station included a summer kitchen, a workshop, a boathouse, a privy, and an oil house, which was added in 1897.

A Notice to Mariners announced that Green Island Lighthouse would first exhibit its light on October 1, 1863. Samuel P. Drew was appointed the first keeper at an annual salary of $400. Samuel and his wife Mary had six children before moving to Green Island, and Frank Albert Drew, their seventh child, was born on the island in 1864. When a teenager, Frank left the island to serve as a cook on a schooner and by the age of twenty-five he had become the captain of a packet steamer. In 1899, Frank followed in his fathers footsteps and entered the lighthouse service as an assistant keeper on Pilot Island. A daughter was born to the Drews in 1869 but died at the age of three months when a storm prevented the family from taking the infant to the mainland for medical attention. The gravestone for Anna H. Drew can be seen on Green Island today.

In 1864, it appears that Keeper Drew, experimenting on his own, substituted a kerosene lamp for the issued lard oil lamp. After lighting this lamp one evening, Samuel attempted to extinguish the lamp by blowing down the chimney, but instead of going out, the lamp exploded, setting his clothes afire. Samuel rushed down the stairs before a second explosion occurred that severely damaged the lens and lantern room. A temporary structure was erected while the original tower was repaired. Helen Marie Drew, the eldest daughter of Samuel and Mary, served as assistant keeper of the light from 1867 until 1870.

In October 1871, the Great Peshtigo Fire destroyed the Town of Peshtigo before jumping across Green Bay and burning a good portion of the Door County Peninsula. During her trips to the mainland earlier that year, Mary Drew had heard tell of itinerant preachers predicting the imminent end of the world, and when the skies darkened over Green Island, she wondered if the end wasnt nigh. Keeper Drew kept the light burning around the clock to help any mariners trying to navigate through the thick smoke.

As the fire approached Green Bay, the Drews could see a ribbon of red along the distant shore, and not long after the sky over Green Island was filled with burning embers that would drop on the wooden shingles of the lighthouse and outbuildings. Keeper Drew and the oldest children worked feverishly to fight fires that broke out on the island, while Mary watched the younger children and kept the light burning in the tower.

At 9 p.m. on October 8, the three-masted schooner George L. Newman, sailing blind, ran aground on the shoals off Green Island. Keeper Drew assisted the schooners crew to safety on the island and gave them shelter in the lighthouse. The crew spent the next week on the island, trying to salvage what they could from the wreckage.

In 1876, the Lighthouse Board recommended that land adjacent to the lighthouse reservation be purchased to make reaching the station easier. Congress appropriated $200 in 1878, and Samuel and Mary Drew were paid $150 for a 0.79-acre parcel. The Drews had acquired most of the island for growing a garden and raising some livestock. One summer they sold eighty-seven bushels of strawberries. The acquired land was likely used for a boathouse, as the boathouse was moved to a more suitable position atop a newly constructed crib in 1882.

Over the next several years, Frank and George assisted numerous people who found themselves in trouble near Green Island:

After having spent most of December of 1925 on the island with no communication with the mainland, Keeper Drew and Alfred Cornell, his assistant, set off on foot for Marinette, Wisconsin. The five-mile trek across the frozen ice of Green Bay took three hours, as a gale was blowing and the men were forced to stop multiple times due to the extreme cold. An automatic acetylene light would serve to light Green Island until the keepers returned the following spring.

In October 1928, twenty-seven-year-old Thomas Mitchell, accompanied by his wife and a dog, took off from Sturgeon Bay for a flight across Green Bay in the Miss Door County, a Stinson monoplane owned by Cherryland Airways. While approaching Green Island at an altitude of 1,200 feet, the plane developed engine trouble, prompting Mitchell to land the plane on the islands short strip of flat beach. Friends awaiting the arrival of the couple in Menominee grew worried after they failed to arrive and notified the Coast Guard, but sea conditions were too poor to launch a search. Keeper Frank Drew put the couple up for the night on Green Island before taking them to Menominee the following day in his boat.

Frank Drew retired from the Lighthouse Service in 1929 and passed away unexpectedly in 1931 from heart failure. His grave is marked by a granite monument inscribed with a lighthouse. In more recent years, a metal plaque with the following inscription was attached to the monument: On 17 June 1999, the U.S. Coast Guard Cutter FRANK DREW (WLM557) was commissioned in Marinette. The cutter bearing Captain Drews name services Aids to Navigation in the Chesapeake Bay. The Coast Guard has honored some of the countrys most distinguished keepers by naming their Keeper Class Coastal Buoy Tenders after them. In 2012, there were fourteen such tenders in service.

Having been abandoned since 1956, only a portion of the walls of the 1863 Green Island Lighthouse remains standing today, but Roen Salvage Company, the owners of Green Island, announced big plans for the island and lighthouse in 2011. A proposed $90 million development, which would be called Annas Vineyard at Green Island in honor of Anna H. Drew, would include condominiums and a marina on the island along with the rebuilt lighthouse. Ferry service to the island would be provided from both Marinette and Sturgeon Bay.

The remains off the keeper's quarters and oil house along with the modern light must be seen from the water or the air. We chartered a plane with Orion Flight Services out of the airport near Sturgeon Bay for the aerial shot.