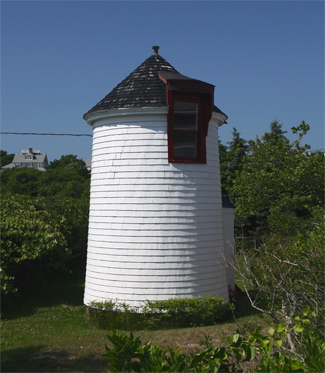 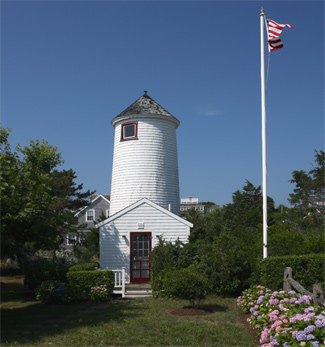 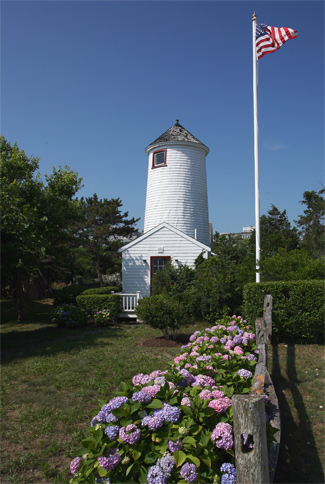 When Lieutenant Edward Carpender was inspecting the lights of Nantucket in 1838, he noted that two beacons were being erected at the head of Brant point, opposite to the best water on the bar. These range lights, officially known as Nantucket Cliff Beacons but called Bug Lights by locals, served along with a pair of range lights on Brant Point and various buoys to guide vessels into Nantucket Harbor. Peleg Easton was hired as the first keeper of the Cliff Range Lights at an annual salary of $300, and a dwelling was provided for his convenience. In 1842, Keeper Easton provided the following report on the station to I.W.P. Lewis:

The two beacons here are small frame buildings. The light is produced from a tin lamp, having four wicks, half-inch in thickness. This lamp is set in a small lantern which stands upon a shelf before a window in the beacon. The last year I consumed 151 gallons of oil, or 75 ½ gallons per each lamp.

My dwelling-house is a frame building, with a stone underpinning, the stone lies upon the surface of the sand. The hearth trimmers and chimney bases are also laid upon the surface. The flooring of the house is but two feet above the sand. During high tides the water comes to the floors, and has undermined the hearth trimmers and chimney so as to cause a settlement of the hearths and chimneys, cracking the walls of the house inside, the plastering and framing, and causing serious injury thereto. I consider that if the foundations had been properly laid at the time, the above-named injuries would not have occurred, for, in every other respect, the house is a good one. The underpinning is two feet high all around; but, if the stone work had been sunk below the sand to the depth of two or three feet, I think the settlement of the hearths, &c., would not have taken place.

An 1850 inspection report noted that Easton was a fine old man, that one of the towers had been relocated to suit the channel, and that a wooden platform had been laid to the dwelling. Following the passing of Peleg Easton in 1852, his wife Mary took over the duties of keeper and remained at the station until 1856.

The Annual Report of the Lighthouse Board notes the following modifications to the station over the years:

1869  The scuttle on roof of dwelling has been removed and a glazed skylight set; iron sink and cistern pump set in kitchen; one room repapered; one side of one of the beacons reshingled, and fence repaired.

1885  A barbed-wire fence was built around the light-house lot.

In 1889, the front beacon was rebuilt, and the height of the rear beacon was increased.

The present conical wooden towers replaced the wooden pyramidal towers in 1903, and that same year a brick oil house was added to the station.

On July 14, 1908, Nantucket Cliff Range Lights were discontinued, and a new set of range lights was established on Brant Point in the form of fixed white lights exhibited from pyramidal, skeleton, towers with a central lantern box.

The discontinued front Cliff Range Light and the keepers tool house were sold to Ellenwood B. Coleman on July 31, 1912. Frank B. Gilbreth, Sr. purchased the property from the Coleman estate in 1921 for $1,840. At that time, the rear range light was still located a few hundred feet south of the property, and the keepers dwelling was located across Pawguvet Lane and owned by Philip R. Whitney, a professor at the University of Pennsylvania. Not many years after the Gilbreths showed up with their eleven children and expanded the tool house, the Whitneys relocated their dwelling to 11 Easton Street.

An unforgettable sight for your chronicler, then a deliriously excited, freckle-faced tyke of ten, was that of a group of Nantucket men with a horse and a ships capstan, moving the larger lighthouse to its current location, close aboard and just abaft our present cottage, The Shoe, built in 1952. We took the name of our house from the original toolhouse cottage that it replaced. Dad named the original place The Shoe to tease Mother, whom he compared to the old lady with more than enough children who resided in one.

The horse that provided the muscle to move the taller tower was blindfolded so that it wouldnt get dizzy as he walked around the capstan. The tower, jacked up and placed on rounded logs, was pulled at the rate of about thirty feet an hour. This was a ticklish job, fraught with considerable danger to all hands and the horse, and was performed bravely and successfully.

The two towers were named Mic and Cyc after Mike and Ike, two cartoon figures of the day. (Name signs still hang over the doorways  Cyc is the taller tower.) As there was not enough room for the family in The Shoe, the towers were converted into dormitories for the children.

Frank B. Gilbreth, Sr. and his wife Lillian were engineers who studied the habits of manufacturing and clerical employees in order to create more efficient work processes. The Gilbreths often used their children as guinea pigs in their experiments, and the family exploits were later chronicled by Frank B. Gilbreth, Jr. and his sister Ernestine in the book Cheaper by the Dozen, which inspired two films of the same title.

Inside the towers, a circular wooden staircase with accompanying handrail leads from the first floor to the top where there is a built-in cabinet with a brass plate for holding the lantern next to the window. Frank B. Gilbreth, Jr added a vestibule to Cyc that contains a small kitchen and a bathroom with shower. This addition made the taller tower a stand-alone guest lighthouse, as the bottom floor of the thirty-five-foot-tall tower has a sofa bed, small dining room table, bureau, and chairs, the second floor landing has a second bed, and the third floor has a desk and space for hanging clothes.

For a larger map of Nantucket Cliff Range Lighthouse, click the lighthouse in the above map.

The pair of lights are privately owned. Grounds/towers closed.


Here is an excerpt from the Nantucket chapter in Cheaper by the Dozen that mentions the lighthouses:

"We spent our summers at Nantucket, Massachusetts, where Dad bought two lighthouses, which had been abandoned by the government, and a ramshackle cottage, which looked as if it had been abandoned by Coxey's Army. Dad had the lighthouses moved so that they flanked that cottage. He and Mother used one of them as an office and den. The other served as a bedroom for three of the children.

He named the cottage "The Shoe," in honor of Mother, who, he said, reminded him of the old woman who live in one.

The cottage and lighthouses were situated on a flat stretch of land between the fashionable Cliff and the Bathing Beach. Besides our place, there was only one other house in the vicinity. This belonged to an artist couple named Whitney. But after our first summer at Nantucket, the Whitneys had their house jacked up, placed on rollers, and moved a mile away to a vacant lot near the tip of Brant Point. After that, we had the strip of land all to ourselves."

The two range lighthouses and The Shoe can also be seen in the 1950 based on the book and also entitled "Cheaper by the Dozen." You can also see the lighthouses in "To Gillian on Her 37th Birthday."