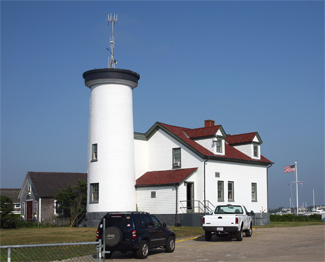 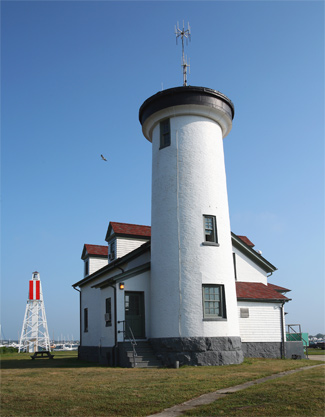 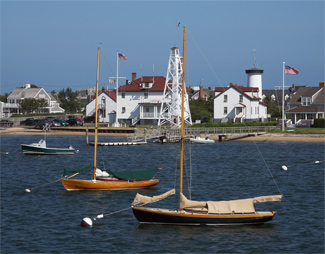 Brant Point Lighthouse, located on the south side of the entrance to Nantucket Harbor, was established in 1746, long before the United States won its independence. Few records exist for pre-revolutionary lighthouses, but all were built using non-standardized plans and local materials  either stones set in mortar, or, as with Brant Point Light, from wood. Wooden lighthouses often caught fire from their oil burning lamps, and Brant Point Lighthouse was no exception  fire would destroy it multiple times. Nantuckets inhabitants turned from farming to whaling after mastering the use of harpoons. In the early eighteenth century, a Nantucket fisherman named Christopher Hassey became the first to capture a live sperm whale. Known as Sherburne until 1795, Nantucket soon eclipsed the noted whaling ports of Falmouth, Barnstable, Marthas Vineyard, and Cape Ann. In 1724, eighty-six sperm whales were killed off the coast of Nantucket. Later, the first U.S. ship to sail into a British port would be a Nantucket whaler bearing sperm oilthe most expensive, cleanest, and brightest burning oil of that time.

During a town meeting on January 24, 1746, sea captains called for the establishment of a lighthouse to protect their investments. Nantuckets location on the shipping line between the colonies main ports coupled with its thriving whaling industry made a strong case for the light. Two hundred pounds were allocated to build Brant Point Lighthouse in supposition that the owners of, or others concerned in, shipping will maintain a light therein. Ebenezer Calef, Obed Hussey, and Jabez Bunker were designated to care for the light, the second, after Boston Light, to be built in America.

Twelve years later the wooden structure burned down. The lighthouse was rebuilt in 1758, following town approval, but it was knocked over by a gale in 1774. An extract from the March 17, 1774 issue of The Massachusetts Gazette and the Boston Post-Boy and Advertiser tells of the event:

We hear from Nantucket, that on Wednesday, the 9th of March, instant, at about 8 oclock in the morning, they had a most violent gust of wind, that perhaps was ever known there, but it lasted only about a minute, it seemed to come in a narrow vein, and in its progress blew down and totally destroyed the Light House on that island, besides several shops, barns, etc. Had the gust continued fifteen minutes its thought it would not have left more than one half the buildings standing, in the course that it passed, but we dont hear of any person receiving much hurt, nor much damage done, except the loss of the Light House which in every respect is considerable.

Another town meeting approved erecting a third light as High as the formerat the towns expense. After captains from other ports objected to paying lighthouse dues, residents called for an Act that passed in 1774 requiring all vessels fifteen tons and over to pay six shillings the first time each year it entered or left Nantucket Harbor for the maintenance of Brant Point Lighthouse.

After yet another fire destroyed Brant Point Lighthouse on September 17, 1783, the town sought a different, less expensive solutiona primitive wooden lantern, with glass windows, was hoisted between two unbraced spars, driven into the loose sand, which had grooves to steady the light. The wooden lantern produced a very dim light, often compared to a lightning bug, and hence it was called bug light. This structure was lost to fire in 1786, and soon a fifth beacon-like light, being merely a frame, fitted at the top for the lamps, was constructed.

A storm in 1788 claimed this light, but the Commonwealth of Massachusetts soon replaced it with a small wooden tower, and this structure was ceded to the federal government in 1795.

The War of 1812 decimated Nantuckets fleet, which had numbered 150 vessels, and left much of the population impoverished. Brant Point Light was extinguished for lengthy periods during the war, but remained unharmed.

Responding to a petition by merchants and mariners of Nantucket, Congress appropriated $1,600 on March 3, 1825 for a new lighthouse at Brant Point described as a house at entrance of Nantucket Harbor for the keeper, with a tower on the same for lantern.

After Lieutenant Edward W. Carpender visited Brant Point Lighthouse in 1838, he offered the following critique of the 1825 lighthouse, which was under the care of Keeper David Coffin.

This light is on the keepers dwelling, on Brant point, at the entrance to Nantucket harbor. It consists of 8 lamps, with 12½-inch reflectors, in 2 series  6 in the lower, and 2 in the upper. The upper lamps are entirely superfluous, and may with perfect propriety be suppressed. Indeed, I have reason to think that one-fourth the number of lamps, differently attended, would give more light, for, in the middle of the afternoon, (the keeper absent, to be gone until sundown, the hour of lighting,) I found the lantern smoked, tube-glasses the same, lamps not trimmed, and reflectors really looking as if weeks or months had elapsed since they had been cleaned, they were so black and spotted.

Lt. Carpender also noted that a beacon light, a small building, standing eleven-feet-tall and showing two common lamps, was placed at the head of the harbor to range with Brant Point Lighthouse. This structure, which was kept by a different keeper than the light on Brant Point, was also found to be in disorder, with a missing pane of glass replaced by some rags held in place with a stick.

In 1856, pleas for a new lighthouse to mark the harbor entrance (the current one was completely rotted) were answered with the construction of a $15,000 circular brick tower and attached dwelling that was considered one of the best stations on the Atlantic Coast. The foundation for the tower consisted of cement, two-feet-thick and eighteen feet in diameter, placed two feet below the mean low water mark. Atop this, the base of the tower was built of hammered granite, laid in courses two feet thick, that formed a twelve-foot-tall cistern where water could be stored for household purposes. The tower itself was brick, topped by sandstone, which supported the lantern. The cast-iron lantern had twelve plate glass windows, which cost twenty-two dollars each. A circular iron staircase led to the lantern, situated forty-seven feet above the ground. The riser height was twelve inches (modern standards recommend tread height to be no more than 7 ¾ inches), which made climbing the stairs quite taxing. The light from the new towers fourth-order Fresnel lens first shone on December 10, 1856.

Also in the 1850s, Nantucket faced a sudden decline after the invention of kerosene cut the need for whale oil (the Canadian inventor of kerosene strongly hoped for an end to the killing of whales), the Gold Rush lured men away, and a growing sandbar blocked the harbor. Luckily, Americans would soon begin the tradition of taking summer vacations, granting the island a new life.

In 1861, the beacon light at the head of the harbor was discontinued, and its tower was moved to a position 280 feet in front of Brant Point Lighthouse, where it could be kept by that lights keeper. These lights served mariners until 1869, when it was decided that the beacon was so close to the main light on Brant Point that the range was useless. The Lighthouse Board wrote that the amount of commerce at Nantucket didnt justify moving the beacon back to the head of the harbor and hiring a separate keeper, but it must have changed its mind, as the beacon light was re-established at its original location on April 20, 1870. The beacon light was discontinued for good in 1880.

Accounts of a dispute that began in 1887 and involved land around the lighthouse note that the first keeper of the 1747 light was the great-grandfather of Mary E. Coffin. Her grandfather and father succeeded him. When her grandfather, Jonathan Coffin, grew old and ill, she went with her father to live at the lighthouse in 1829. According to Mrs. Coffin, the earlier lighthouses were a considerable distance north and west from the present site. In December 1887, the government erected a wire fence along what they presumed was the border of their lighthouse property after notifying several individuals months earlier that they were trespassing on government lands. This fence cut off access to the easterly portion of the Nantucket Hotel and three cottages. While the dispute was being settled in court, gates were made in the fence to allow people to pass during the summer months. In 1901, the government sold five lots, totaling 5.9 acres, to the owners of the cottages and hotel to resolve the issue.

Shifting sands once again required a new lighthouse, and the present wooden tower, the ninth light to grace Brant Point, was erected at the tip of the point in 1901, roughly six hundred feet east of the 1856 lighthouse. A brick oil house was added near this tower in 1904.

A 1907 article states that the 1856 tower, still in good condition, was being retained in the event the light would have to be moved again, but the 32 x 28 foot keepers dwelling, where Keeper Howes and his family lived, needed reconstruction. Like the tower, it was built of brick atop a granite foundation, but it had always been prone to extreme cold and dampness and was even boarded over at one point to try to correct the problem. Although the tower was built over the cistern, its double walls kept it dry and comfortable, while visible moisture clung to the dwellings walls. The Lighthouse Board requested $4,000 to build a new dwelling closer to the 1901 lighthouse, but it wasnt until 1920 that funds were allocated. Bids were invited for the construction of the dwelling, but none were received, and the project was postponed indefinitely.

As erosion was threatening the 1901 lighthouse, an apron of riprap was placed around the tower in 1923.

The keepers at Brant Point were not only prepared to help mariners, as evidenced by Keeper Richard Dixon rescuing two men from a motorboat that sank after being damaged by ice in 1926, but they also assisted landlubbers as well, as demonstrated by Keeper Gerald Reed helping a neighbor whose automobile caught fire in August 1928.

Brant Point Light, which shines at an elevation of just twenty-six feet making it the shortest light in New England, was changed from white to red in 1933 so that it would not be mistaken for the increasing number of residential lights near the harbor. The tower was completely renovated in 1983 and again in 2000.

Brant Point Lighthouse was automated in 1965, but the little conical tower with its black lantern still has many visitors, who find it an excellent spot to watch the ferries and other vessel traffic entering and leaving Nantucket Harbor.

Also found on the grounds of the Coast Guard station on Brant Point, home to the 1856 lighthouse, is a pair of range lights used to guide vessels into Nantucket Harbor. These tall range lights were placed in operation July 1908, when the Nantucket Cliff Range Lights were discontinued.

The fourth-order Fresnel lens from Brant Point is on display at the Nantucket Life-Saving Museum.

For a larger map of Brant Point (Old) Lighthouse, click the lighthouse in the above map.

Both the Steamship Authority and Hy-Line Cruises offer ferry service to Nantucket from Hyannis. From the Steamboat Wharf, proceed up Broad Street and then turn right onto S. Beach Street. After just a couple of blocks, turn right onto Easton Street. The lighthouse is located near the end of Easton Street, but you will want to park in the spaces on your left at the intersection of Easton and Hulbert Avenue.

The fourth-order Fresnel lens from Brant Point is on display at the Nantucket Life-Saving Museum.