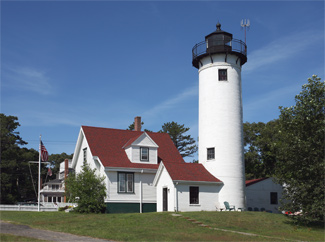 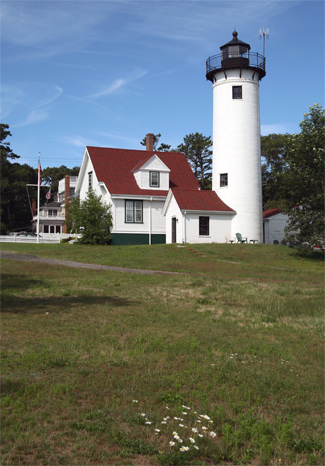 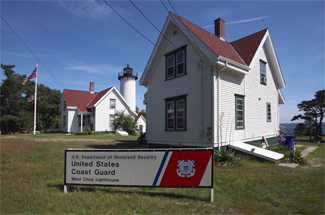 The two peninsulas known as West Chop and East Chop define the harbor at Vineyard Haven, on the north shore of Marthas Vineyard. Vineyard Haven was formerly known as Holmes Hole and was one of the earliest settlements on the island. The residents of Holmes Hole felt a bit neglected when a lighthouse was built on Cape Poge in 1801 to guide vessels into the harbor at Edgartown even though there was more ship traffic at Holmes Hole. They eventually appealed to their congressman, John Reed, for a lighthouse to mark their harbor, and on March 3, 1817, Congress appropriated $5,000 for a lighthouse on the west chop of Holmes Hole Harbor. Four acres of land for the lighthouse were purchased at a cost of $225 from Abijah and Mary Luce of Boston, and Duncan McBean was employed to construct a twenty-five-foot-tall rubblestone tower and an accompanying stone dwelling measuring twenty by thirty-four feet. Captain James Shaw West, a long-time resident of Holmes Hole, was hired to be the first keeper of the light, which went into service on October 5, 1817. Keeper West and his wife Charlotte were the parents of nine children when they moved into the lighthouse, though one child had already passed away. Two more children were born to the Wests while they lived at the lighthouse.

The light is in a stone tower, 25 feet high, and 60 feet above the level of the sea; it consists of 10 lamps, with 13 ½ and 15-inch reflectors, arranged in two equal series or tiers. Though an exceedingly useful light, six lamps, compactly arranged in a single series, is abundance for it. I found this light in admirable order; reflectors bright, glass perfectly clean, lamps carefully trimmed, and everything justifying the high reputation it enjoys along the coast.

The sea is encroaching upon this tower and dwelling, and, in the event of its becoming necessary to remove them, I recommend that the light be placed about three hundred yards further to the southward, on a site much approved by the pilots, directly opposite a shoal on which vessels are apt to strike, supposing that after they have passed the lights, to enter the harbor, they are out of danger. No less than 127 vessels have been ashore here during the twenty years this keeper has attended the light.

In 1843, Keeper West provided the following description of the stations structures for inclusion in a report compiled by I.W.P. Lewis.

The light-house and dwelling-house are both built of rough stone, laid in lime mortar. Both buildings are leaky, in consequence of the mortar with which they were built being bad. The wood work of both buildings is rotten; in consequence of the leaks in the walls.  The house is damp and cold. The inside of the tower is coated with ice in the winter. The lantern sweats badly at all times, and so much so in winter as to cover the glass with ice and frost. I have removed large quantities of ice from the lantern, having to cut it up off the deck with an axe.  The bluff on which the tower stands has washed away to within 37 feet of the base, and I consider the buildings unsafe in their present position. I have known 30 feet of the bluff to wash away in one storm. I am not allowed a boat, which prevents me, oftentimes, from rendering assistance to the many vessels that get ashore in this neighborhood.

Keeper James Wests appraisal of the erosion at the station must have been accurate as a new conical stone tower and keepers house were built in 1846 about 1,000 feet southeast of the original tower. The old keepers dwelling was given to Gustavus West, the keepers son, who had it removed to Music Street in West Tisbury. The new tower was later enclosed in wooden shingles, apparently because of leakage problems.

Three beacon lights were placed in operation at the head of Holmes Hole Harbor on December 4, 1854 as a guide along the two channels that lead to safe anchorage in the harbor. A dwelling was completed the following July for Moses T. Cromwell, the keeper of the beacon lights. In 1857, a lantern was installed atop this dwelling and fitted with a fourth-order lens to replace the three lights that apparently never worked out well as ranges. Even this new arrangement must not have served much of a purpose, as Holmes Hole Beacon Light was discontinued on December 1, 1859.

Keeper James West served for three decades at West Chop Lighthouse before resigning in 1847 and being replaced by Charles West (not a son of James). Charles, like James, won the admiration of inspectors. A report in 1850 noted: The state and condition of this light-house is not surpassed by any; it stands A No. 1.it is pleasant to visit such a light-house. Winslow Lewis installed a new system of reflector lights at West Chop in 1848, but a fourth-order Fresnel lens replaced these in 1857. Charles West kept the light until 1868, when his son, also named Charles, succeeded him. Charles, Jr. served until 1909.

The Annual Report of the Lighthouse Board for 1882 noted that a thirty-two-foot-square, frame engine-house was erected at the station to power a ten-inch steam fog whistle, which had been placed in operation on December 1, 1881. As the roof surface was not sufficient to capture enough fresh water, a well was driven within the building to provide the additional quantity. A one-and-a-half-story frame keepers dwelling was also built at the same time for the head keeper, and an assistant keeper, who was hired to help with the increased work load imposed by the fog signal, moved into the existing housing. The stone dwelling built in 1846 was torn down in 1888, and a frame dwelling was built atop its foundation.

By the 1890s, West Chop had become a popular and fashionable summer vacation spot, and the houses that had sprung up in the area were beginning to obscure the lighthouse beacon. To remedy this, a lens lantern was provided and placed atop a seventeen-foot-tall iron mast, mounted on the lantern deck. This served until the present lighthouse, a forty-five-foot-tall cylindrical tower, was constructed in 1891 to replace the shorter 1847 tower. On August 20, 1891, the light was moved to a temporary tower, sixty feet from the old tower, and then on December 31, 1891, the light was placed in the new brick tower, built on the old site. This new redbrick tower was seventeen feet taller than its predecessor and was painted white in 1899. An oil house was added to the station in 1895.

Seamond Ponsart lived at West Chop Lighthouse while her father, Octave Ponsart, was in charge from 1946 to 1957, and she later penned a book about the familys lighthouse life called Everyday Heroes: The True Story of a Lighthouse Family. One of the stories she often told was about the familys pair of geese:

I had, dogs, cats, chickens  lots of them  but one time we had the opportunity to acquire two geese and we thought this would be a welcome addition to our little menagerie and give us some additional amusement too. Well, Lucy and Goosey were big white geese and turned out to be very bossy and argued so much between themselves and chased anyone who showed up around the lighthouse that they were really the winged pariahs of the station.

We had them for about three years, and I must admit they chased off most of the summer tourists quite well.

Each fall they would honk at their wild cousin buddies and flap their wings and threaten flight. Dad would clip back their wings, and the most flight they would achieve was a sideways airborneness of about five feet in the air, come crashing to the ground, and then go off honking and complaining.

After their many unsuccessful attempts at this, we figured they never would really fly. However, one spring day, [with] the wild geese overhead, I guess something went spong in their little pea brains and before we knew it, they did a long takeoff running the length of the two houses, flapping frantically, and sailing right over the bluff into the water  Vineyard Sound!

My mother was frantic. There was a strong tide running, and we figured the next stop for Lucy and Goosey was Spain! Dad launched the dory and rowed toward them, but they got caught in the strong tide and were really heading east very swiftly. As luck would have it, the Menemsha Coast Guard Station boat crew was having a practice run and they saw our hapless birds. Someone said, I bet thats the Ponsarts geese! (They were pretty well known as the Nasty West Chop Poultry.)

Well, our good buddies, the Coast Guardsmen scooped them up from a certain watery death and delivered them back to us. The Chief on delivering them up to us said, Well, weve been on wild goose chases beforebut not where we actually caught two geese who went wild.

We all had a good laugh on that, and Lucy and Goosey returned to the pen, never again to be tempted to go AWOL.

While the names Goosey and Lucy are feminine, by the time we found out they were ganders, it was too late to change them  I can safely say that they were probably the most notorious and the only ganders ever to roam West Chop Light.

West Chop Light was automated in 1976, the last of lights of Marthas Vineyard to lose its resident keeper, but remains an active aid to navigation, exhibiting a white light occulting every four seconds with a red sector to cover Squash Meadow and Norton Shoals. A fourth-order Fresnel lens is still in use in the lantern room. The keepers dwellings were used as offices for the Vineyard Environmental Research Institute for a few years following automation of the station, but today, the house nearest the tower is used by the officer-in-charge of Coast Guard Station Menemash, and the second dwelling is used as a vacation house for military personnel.

On August 8, 2000, President Bill Clinton, who occasionally vacationed on Marthas Vineyard while in office, signed the Oceans Act of 2000 on the grounds of the West Chop Lighthouse, stating, Theres no better place to sign this legislation than here because of the long-standing links to the sea the people of Massachusetts have.

Located northwest of Vineyard Haven, marking the western side of the entrance to the harbor.
Latitude: 41.48081, Longitude: -70.5998

For a larger map of West Chop Lighthouse, click the lighthouse in the above map.

From the Vineyard Haven ferry landing, go west on Union Street and then turn right onto Main Street. Main Street will become West Chop Road, which will lead you to the lighthouse that you will see on your right. The dwelling adjacent to the lighthouse is a Coast Guard residence, while the second dwelling is used as a vacation home for military personnel. The lighthouse can be seen from ferries bound to and from Woods Hole.

The lighthouse is owned by the Coast Guard. Grounds/dwellings/tower closed.