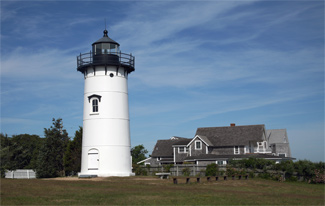 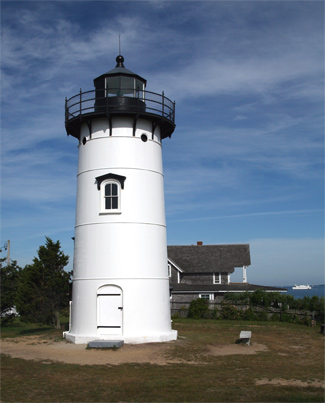 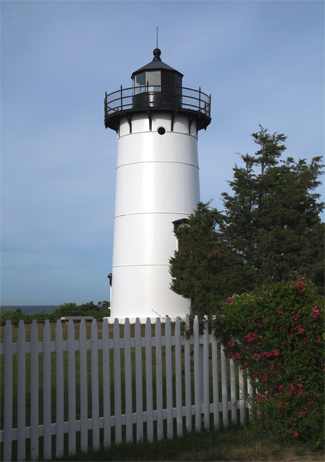 One of the many definitions of chop is the entranceway into a body of water. Knowing this, it seems natural that the two lighthouses flanking the entrance to the harbor at Vineyard Haven on the north shore of Marthas Vineyard are respectively known as East Chop Lighthouse and West Chop Lighthouse. A semaphore station was established at East Chop in 1828 to display shipping information, but many local residents felt a proper lighthouse, like the one established on West Chop in 1817, was needed at the site. A local mariner named Captain Silas Daggett actively lobbied for a light there, but was unsuccessful at convincing the authorities of the necessity of another light.

In 1869, Captain Daggett grew tired of waiting, built his own lighthouse at East Chop, and then had the following notice published in various newspapers:

The undersigned has at a considerable expense erected a Lighthouse (to be known as the Coasters Light) on the East Chop of Holmes Hole Harbor. The height of the lantern above the level of the sea is about sixty feet, from which a fixed red light will be exhibited on and after June 5. Captains, owners and underwriters of vessels cannot fail to appreciate the convenience of the Light, and should therefore be willing to contribute to its support. Silas Daggett, Branch Pilot, Holmes Hole, Mass.

Another notice a few years later informed mariners that Daggetts light, which was destroyed by fired in December 1871, had been rebuilt and would be relighted on May 2, 1872. The Lighthouse Board loaned Daggett three twenty-one-inch reflectors, which he installed atop his house to produce a fixed red light at a height of seventy-six feet above the sea. The makeshift light station was supported by Peters pence, contributed by vessels that called at Vineyard Haven, formerly known as Holmes Hole.

The Lighthouse Board eventually conceded the need for a lighthouse at East Chop as shown by the following entry in its 1873 Annual Report:

A light has been maintained for several years at this point by the subscriptions of the owners of steamships and by other private individuals. As there is no doubt as to the utility of the light, it is recommended that an appropriation for erecting a fourth-order light be made.

Finally, in 1875 Congress approved $5,000 to build a light station at East Chop. The government purchased Captain Daggetts station in 1876, and noted that Daggetts dwelling with its attached light tower was a slight wooden structure, little better than a shanty. By mid-1877, a new one-and-a-half-story dwelling and a cast-iron tower were under construction at the station. The forty-foot-tall, conical tower was similar in style to several other New England lighthouses constructed during the late 1800s and was positioned about fifty feet southeast of the former light. Daggetts shanty survives to this day and has been incorporated into a large residence at the corner of East Chop Drive and Sandy Bluff Lane, not far from East Chop Lighthouse.

A fourth-order Fresnel lens initially shone from atop East Chops cast-iron tower at a height of seventy-nine feet above the water. The lights characteristic was changed from fixed white to flashing red in 1898, and then to flashing green in 1934. A storm porch was built over the tower door in 1895, and in 1897 an oil house was added to the station to house the volatile kerosene oil used in the lantern.

The lighthouse was painted white at first, but in the 1880s it received a coat of reddish-brown paint and became popularly known as the Chocolate Lighthouse. In 1988, its daymark was returned back to white, as the dark color was causing excessive heat and condensation in the tower.

From 1912 to 1934, East Chop Lighthouse was maintained by a one-armed keeper named George Walter Purdy. Purdy was from Newfoundland where he had been a lobsterman. After moving to Massachusetts, he took a position aboard the lighthouse tender Azalea, where one day he was in the engine room showing someone how to run the motor when his sleeve got caught in the motor. His arm was mangled by the motor, and as gangrene had set in before they could get to New Bedford, the arm had to be amputated.

After losing his arm, Purdy was assigned to lighthouse duty, starting first at Sankaty Head on Nantucket, then at Gay Head and finally East Chop on the Vineyard. One of the Purdys four children, a son named Luther, was born at East Chop. Another child, Alice Purdy Ray, was born while her father served at Sankaty head and was interviewed later in life by Lindsey Lee of the Marthas Vineyard Historical Society about her life at East Chop.

The house there, they dont build them like that anymoreThe roof was slate. In the wintertime it was beautiful. You would never know what the weather was outside if you were in the house. You wouldnt know whether it was raining, blowing, sleet. The house was so solid it wouldnt show anything. It was just as nice and warm as could be. In the summertime it was cool.

There was another building they called a tool shed, and there was a barn across the street. You see, Dad decided he had to have a cow so he asked the town if he could put a cow across the street. There wasnt anybody there. It was just open field. They said, Go ahead, so he went out and bought himself a cow.

And we used to have a vegetable garden. You should have seen the garden my family used to have in there. Oh, those rambling roses. Theyre still growing wild along the fence in front.

An article in the Vineyard Gazette in May 1928 praised Keeper Purdys industry:

George W. Purdy, one-armed keeper of East Chop Lighthouse, has previously astonished his acquaintances with his engineering feat, but his latest one is the more remarkable of any yet performed. Supplies for the light are landed on the beach at the foot of the high bluff on which the lighthouse is situated. All along the shore of the government reservation is a heavy wall of loose boulders, weighing from one to several hundred pounds each. Placed in an unbroken line to prevent the sea from wearing away the bank, they lie at the waters edge and prevent boats from landing. Because of this, it has been necessary for the lighthouse tenders boat to land on a privately-owned beach, from which the supplies had to be carried over to the government beach and thence up the bank by a flight of stairs As this made much extra work for Mr. Purdy, he has been engaged in building a boat landing during the past winter, and the completed job is a thing to marvel at.

The landing consists simply of a runway of planks and timbers about four wide and forty feet long, extending out in the water in such a way that a boat may tough and be drawn up on it. But the remarkable feature about it is the fact that it passes right through the boulder wall and in that way it is secured against damage by sea.

Several boulders, weighing hundreds of pounds, were moved by Mr. Purdy, who worked with his spade and a huge wooden pry to accomplish it. Nearly anyone who considers the prodigious amount of labor necessary in such construction will agree that Mr. Purdys one arm is worth more than two as used by the average man.

During his odd moments, when the weather was favorable Mr. Purdy built a new flight of steps up to the bank; fifty treads had to be sawed and nailed in place. He has also just finished painting the lighthouse tower, doing the work alone.

When the lighthouse was automated in 1934, Purdy and his family were given the chance to continue renting the house for $100 a month, but they declined as it was a bit lonely on the hill in the winter, so all the buildings except the tower were torn down. Alice Purdy Ray couldnt understand why the government pulled down the dwelling rather than sell it to someone, but she found out why the home was so quiet when the wrecking crew discovered thick brick walls hidden beneath the dwellings wooden exterior.

East Chop Lighthouse remains an active aid to navigation, although the Fresnel lens was replaced by a modern beacon in 1984. The land surrounding the tower was sold to the town of Oak Bluffs in 1957 for use as a park, and in 1985 maintenance of the tower was handed over to the Vineyard Environmental Research Institute (VERI). Responsibility for East Chop Lighthouse, along with the lighthouses at Gay Head and Edgartown, was passed to what is now known as Marthas Vineyard Museum in 1994. In 2003, the museum paid $25,000 for a professional assessment of all three lighthouses by Gary Gredell, who had previously worked on the restoration of forty-six lighthouses from Maine to Maryland.

When funds from the Community Preservation Act were made available for lighthouse restoration by the towns of Edgartown and Oak Bluffs, the museum contracted Campbell Construction Group of Beverly, Massachusetts to overhaul the towers at East Chop and Edgartown. During the summer of 2007, East Chop Lighthouse was refurbished inside and out at a cost of $140,000. The tower received new windows along with a fresh coat of white paint, and the electrical wiring that formerly connected to the side of the tower, much to the frustration of artists and photographers, was placed underground.

East Chop Lighthouse is open for sunsets on Sunday evenings during the summer and can also be rented for weddings and parties.

For a larger map of East Chop Lighthouse, click the lighthouse in the above map.

From the marina in Oak Bluffs proceed to East Chop Road, which is on the western side of the marina. Follow East Chop Road north, and you will see the light on your right.

The lighthouse is open for sunset on Sundays from mid-June through mid-September. Martha's Vineyard Museum maintains a list of visiting hours for the lighthouse.

The lighthouse is owned by the Coast Guard and managed by Martha's Vineyard Museum. Grounds open, tower open during scheduled tours.