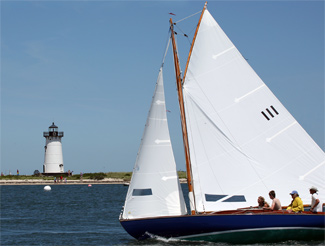 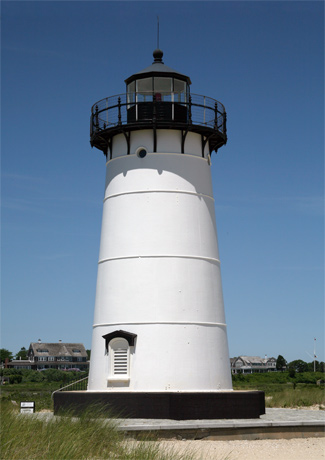 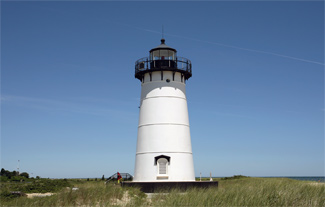 The first European settlement on Marthas Vineyard was established in 1642 at the eastern end of the island and given the name of Great Harbor by Thomas Mayhew, one of its founders. In 1671, the name of the town was officially changed to Edgartown, most likely christened as such after Edgar, Duke of Cambridge, a son of the future King James II of England. Edgar had actually passed away a month before the name change, but word of this had not reached the colonies. Edgartown has a large harbor that faces Chappaquiddick Island to the south and east and was home to a highly profitable whaling industry in the late 1700s and early 1800s. A full quarter of all whaling ships in the United States sailed out of Marthas Vineyard and nearby Nantucket during that period, and Edgartown was home to over a hundred whaling captains. The opulence of the era can still be viewed today in the form of the churches and captains houses that make up the Edgartown Village Historic District.

On May 23, 1828, Congress approved $5,500 for building a pier and light-house on the Point of Flats, at the entrance to Edgartown Harbor. That first lighthouse was a two-story dwelling with a side-gabled roof atop which was centered the lantern room. The structure was erected by a Mr. Bowker on wooden pilings out in the water, requiring its first keeper, Jeremiah Pease, to row a short distance to get to the tower. Keeper Pease made the following entry in his diary on October 15, 1828: Wind NW Received the oil etc., for the lighthouse from the sloop Henry of New Bedford. Captain John Akin lighted the lamps for the 1st time.

Keeper Pease became part of a minor scandal when a local paper claimed that the lighthouse had become a rendezvous for all kinds of dissipating. Apparently a young man boarding with the keeper was the cause of the allegations, and Pease managed to reclaim his reputation and continued as keeper for two separate periods of thirteen and six years (1828  1841 and 1843  1849). Before the Lighthouse Board was formed in 1852, political patronage often ruled lighthouse appointments, and as a Democrat, Pease was replaced twice when the Whig Party was in power.

After a visit to Edgartown Lighthouse in 1838, Lt. Edward W. Carpender, wrote the following, This light is on the keepers dwelling, at the end of a short wooden breakwater in the harbor of Edgartown. Cape Poge light, 4 miles outside, is the guide to the harbor, so that the light on the breakwater requires to be of very little magnitude; yet I found the same number of lamps burning here as in the most exposed situations in the district. It is true only 7 of the 10 were fronting the sea, the other 3 being so placed as to reflect their light, to no useful purpose, towards the shore. I recommend the suppression of 6 of these lamps, and the compact arrangement of the remaining 4 to suit the approach to the breakwater.  It cannot be long before Government will have to reconstruct this breakwater and light-house, as the worms have made great havoc with them, and the sea threatens them, particularly the latter, with total destruction.

In 1840, the rotten wooden pilings supporting the lighthouse were replaced by a stone pier. The keepers house was drafty and leaky, and vulnerable to the sea and weather due to its exposed location. This resulted in a greater than average turnover of keepers, and some keepers refused to live in the official quarters preferring to seek lodging on the nearby shore.

I.W.P Lewis made the following report on that state of Edgartown Harbor in 1842.

Edgartown harbor is, for excellence, the safest, most commodious, and easier of access, among all others in the Vineyard sound; but, unless a firm substantial breakwater is constructed here, in placed of the rotten row of piling now there, the harbor will, in a few years, be closed, or its entrance so removed that shipping can only enter it with great difficulty and danger of running ashore. Its preservation from further injury by the fast accumulating sands is well worthy of attention.

Keeper Sylvanus contributed the following description of the station to Lewis 1842 report:

I was appointed keeper of this light in March, 1841, upon a salary of $350 per annum. The light-house is a frame building, standing upon a pier about 1,800 feet from the shore, and connected therewith by a causeway made of piles, &c. The light-house and causeway were built in 1828 by Mr. Bowker, as agent for Winslow Lewis, the contractor for the work. I was employed upon the work as a carpenter. The whole structure was badly done. The light-house originally stood upon a wooden pier; three years ago it was necessary to replace this with one of stone, the old pier being entirely decayed and rotten. The frame of the house was light and weak, and the building always leaky. The lantern stands upon the roof of the house, and is shaken by the force of storms, causing other leaks in the roof. The plastering is off the walls in several places, and one room, together, with the upper entry, never was plastered at all by the builder. The lantern leaks all about the door and the angles of it. During the gale of October last, it shook so that I had great difficulty in keeping my light burning. There is not rainwater cistern connected with the establishment, all they used for cleaning, &c., being brought from the shore. The causeway has been knocked to pieces five or six times, and has been an expensive concern to keep in sufficient order to cross it with safety It is my opinion, the whole establishment was very badly built in the first place.

To preserve the harbor, a stone breakwater topped by a wooden walkway was constructed in 1847 at a cost of $4,700. A fourth-order Fresnel lens replaced the old lamps and reflectors in the lantern room in 1856. The keepers house and breakwater were both repaired a number of times, and a storage shed, an iron oil house, and fog bell were respectively added to the station in 1892, 1896, and 1908.

By the time Keeper Henry L. Thomas transferred to Edgartown Lighthouse in 1931 after twelve years of service at Cape Poge, the dwelling was in tolerable shape. A reporter who paid a visit to the keeper and his family in 1934 included the following in a newspaper article describing the familys living conditions. Their lighthouse home has practically all the conveniences that go to make the modern home comfortable except for electricity. As the lighthouse is located a quarter of a mile out from shore it has never been wired for electricity, although they have a radio, running water, and a modern heating plant.

The Great Hurricane of 1938 inflicted significant damage to the lighthouse, and upon taking control of the nations lighthouses in 1939, the U.S. Coast Guard quickly tore down the building, which would have required costly expenditures for repairs and modernization. The original plan was to replace the lighthouse with a steel skeleton tower, but instead a disused 1881 lighthouse that served as a rear range light on Cranes Beach in Ipswich, Massachusetts was dismantled and barged, minus its brick lining, to Edgartown. The relocated forty-five-foot cast-iron tower was soon in service at Edgartown and remains an active aid to navigation today, showing an automated flashing red light every six seconds.

Edgartown Lighthouse was refurbished by the Coast Guard in 1985, and a thirty-year leased was granted to the Marthas Vineyard Historical Society in 1994. After his son Ricky died in a car accident in 1996 just three weeks after his sixteenth birthday, Rick Harrington approached the Historical Society about establishing a childrens memorial at the lighthouse. Matthew Stackpole, the societys executive director, and Craig Dripps, a board member, led a successful fundraising campaign that raised $75,000 for the memorial. The deteriorated base of the lighthouse was rebuilt using 3,500 cobblestones enclosed by a polished granite border and divided into quadrants by granite spokes mirroring the beams of light produced by the lighthouse. Roughly 2,000 of the cobblestones are large enough to be inscribed with a childs name, and a fair number of them have already been purchased.

Following the dedication ceremony held for the memorial on July 14, 2001, Dick Sherman, whose own son is memorialized on a cobblestone, circled the tower in his Korean War-era sightseeing plane, a tradition he continued for several years afterwards at the annual Ceremony of Remembrance held at Edgartown Lighthouse.

The Marthas Vineyard Historical Society received $250,000 from the Community Preservation Act in 2007 to restore Edgartown Lighthouse, and Campbell Construction of Beverly, Massachusetts was hired to do the work. Rusty bolts used to secure the lantern room were replaced with stainless steel ones, a spiral staircase took the place of an unsafe vertical ladder, and new windows were installed in the lighthouse. The $80,000 staircase allowed the lighthouse, which is now easily accessible from Edgartown, to be opened to the public for climbing for the first time.

On May 24, 2012, Edgartown Lighthouse was made available under the National Historic Lighthouse Preservation Act of 2000 to eligible federal, state, and local agencies, non-profit corporations, educational agencies, and community development organizations for educational, recreational, cultural, or historic preservation purposes. Interested entities were given sixty days to submit a letter of interest expressing their desire to submit an application for ownership. The Town of Edgartown submitted its application for the lighthouse in January 2013, and the transfer of ownership to the town was announced a year later, in January 2014. Other applicants had expressed interest in acquiring and relocating the lighthouse, but Edgartown Lighthouse will rightfully remain where it has faithfully stood for so many years as a beacon for mariners.

For a larger map of Edgartown Harbor Lighthouse, click the lighthouse in the above map.

Edgartown is on the eastern end of Martha's Vineyard. The roads from Vineyard Haven and Oak Bluffs will lead you to Main Street in Edgartown. As you approach the harbor, turn left onto Water Street. Follow Water Street north until you see the lighthouse on your right. Parking should be available on the street, and you can follow a path to the light. The lighthouse has been dedicated as the Children's Lighthouse Memorial and is now open for climbing during the summer. Martha's Vineyard Museum maintains a list of visiting hours for the lighthouse.

The lighthouse is owned by the Coast Guard and managed by the Martha's Vineyard Historical Society. Grounds open, tower open in season.


Edgartown Lighthouse can be see in the background of a couple of scenes in the 1975 movie "Jaws." It first appears when Chief Brody and the mayor are aboard the On Time Ferry discussing beach closures, then again when the tiger shark is hung up for display. Gay Head Lighthouse also shows up twice in the film and is located opposite a giant billboard that reads "Amity Island Welcomes You." There is a distant shot of a lighthouse during the closing credits, but I'm not sure which lighthouse it is.

Distant views of Edgartown Lighthouse can also be seen in "Jaws 2," but the lighthouse towards which the youth sail and at which the killer whale was examined was a prop built on a beach near Navarre, Florida.

If you are not into the Jaws franchise, you can catch the lighthouse in the 1995 movie "Sabrina."