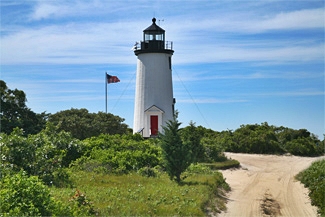 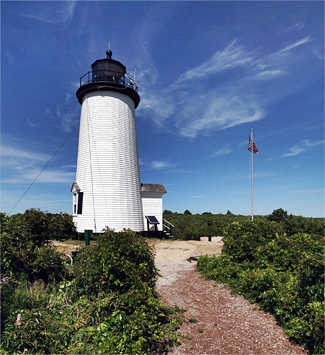 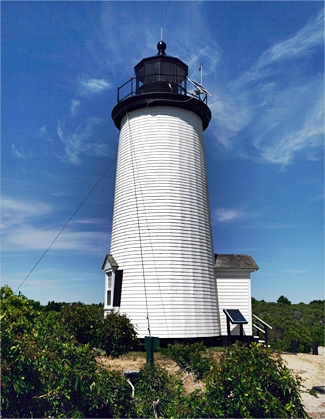 Cape Poge Lighthouse (sometimes also spelled Cape Pogue) is situated at the northeast corner of the small island of Chappaquiddick, just east of Marthas Vineyard. Today, most visitors arrive on Chappaquiddick aboard the On Time, a ferry that links the island to downtown Edgartown. At the beginning of the nineteenth century, Edgartown was home to a substantial whaling fleet, and the government realized that some kind of navigational aid was needed to help guide ships around Cape Poge and into the harbor at Edgartown. On January 30, 1801, Congress approved $2,000 for a lighthouse, and four acres of land at Cape Poge were purchased for $36 just a couple of months later. A local contractor named Duncan McBean constructed a thirty-five-foot octagonal wooden tower, as well as a small, two-room keepers house. The tower was originally equipped with a spider lamp, but this was replaced in 1812 by an array of oil lamps and reflectors supplied by Winslow Lewis.

Matthew Mayhew, the first keeper of Cape Poge Lighthouse, activated the light in December 1801. Mayhew and his wife Magdalen were the parents of eight children, several of whom were born while the family lived at the lighthouse. Lighthouses on the East Coast remained active during the War of 1812 until the British chased President Madison out of Washington and set fire to the Capitol building and the White House. Only then were the lights ordered to be forthwith extinguished. Keeper Mayhew obeyed the order and after removing the lighting apparatus from the tower hauled it four miles to the residence of Samuel Huxford on Chappaquiddick where it was stored in the basement. The light was relit in early 1815.

Cramped for living space, the Mayhews received some relief when a third room was added to the keepers house in 1816. Prior to the addition, the Mayhews only had one door and were often obliged to come and go by way of the windows.

Erosion is a constant issue at the northern tip of Chappaquiddick Island, and in 1825, Keeper Mayhew reported that two acres, or half of the original station, had been lost to the sea. He wrote: If we are not in danger of falling immediately down the clift, it is very unpleasant, particularly to females to be thus situated in storms when the Sea is beating with such violence as for the spray to fly against and over the House and no other dwelling House within 5 miles for a refuge. Four additional acres of land were purchased, and the keepers brother was paid $250 to move the house farther inland.

Keeper Mayhew passed away in December 1834, and before his successor, Lot Norton, could reach the station, the schooner Hudson was lost near the point. It is not known if the light was operating at the time, but one of the passengers from the vessel passed away at the lighthouse.

By 1836, the tower was only forty feet from the edge of a cliff. A stone wall was built under the cliff for protection, but made little difference. When Edward W. Carpender inspected the station in 1838, the 1801 wooden tower was being moved a few yards back from the cliff edge. Carpender noted that the light was exceedingly useful as a guide to an immense number of vessels that called at Edgartown Harbor, but that cost-savings could be achieved by discontinuing the upper array of five lamps, and using just the lower six lamps, which could be rearranged to exhibit their light over a smaller arc, as the light was not necessary at all points of the compass.

Keeper Lot Norton provided the following report on the status of the tower and dwelling at Cape Poge in 1842:

The light-house was built in 1800, is a frame building 30 feet height. The framing is decayed and rotten, particularly about the deck, and leaks profusely. The lantern is very much racked and twisted by storms, so as to break the glass, and shake the tube glasses in such a manner as to break great numbers of them. Four years ago the tower stood about 230 feet further north, and a seawall or breakwater, composed of loose stone and piling, was constructed on the beach to prevent the bank from washing away; however the whole work was destroyed, and the tower obliged to be moved to its present location. My dwelling-house has but three small rooms in it; there are no chambers, and I am very much troubled to find sleeping room for my family. The house being so old, and never repaired much, is not in a decayed state. All the window frames are rotten and very leaky several of the floor timbers and sills are also rotten. The roof leaks very much about the chimneys, there being no lead flashing or collar thereto, but only pointed with lime mortar. The house is a frame building, 47 by 15 feet square, 9 feet high to eaves, and a very low pitched roof, leaving no chamber room above, but only a small cockloft.

In July 1844, Winslow Lewis finished a new tower at Cape Poge that was connected to the old keepers dwelling by an enclosed walkway. In 1857, a new lantern room was installed, and a fourth-order Fresnel lens replaced the towers lamps and reflectors.

Problems with erosion continued, and the annual report of the Lighthouse Board in 1878 predicted that the keepers house, which had been enlarged just over a decade earlier, would probably fall into the sea within two years if the cliff is worn away at the rate it has been wearing during late years. Four additional acres near the lighthouse had been purchased in 1870, and upon this land a new duplex was built for the keepers in 1800 using $5,000 appropriated by Congress in 1879. An assistant keeper had been assigned to Cape Poge since 1867, but fortunately the head and assistant keepers, Edward and Jethro Worth respectively, were father and son so sharing the small dwelling would not have been an issue. The Worths continued to serve as keepers at Cape Poge until 1882, when the assistant keeper positioned was abolished, Edward retired, and James was promoted to head keeper.

In 1889, the Lighthouse Board noted that the sea was so rapidly encroaching on the station, that the tower was once again in danger. Rather than build a new tower, the Board suggested that the parapet and lantern room from the lighthouse could simply be placed on one end of the keepers duplex, in which only one set of quarters was occupied. This plan was abandoned, and in 1893, a new thirty-five-foot wooden tower was built forty feet inland from the previous one. In one day, the lantern room from the old tower was inched across thirty-five foot high staging to the new tower, where it was installed in time to the light the beacon that evening.

In 1898, the lights characteristic was changed from fixed white to flashing white and red due to complaints that the lighthouses beacon was confused with the light from the Cross Rip Lightship. As the flashing characteristic required the keeper to wind a clockwork mechanism every five or six hours, an assistant keeper was once again assigned to Cape Poge starting in 1900. The fourth-order lens installed in 1898 was manufactured in England by Chance Brothers and featured six flash panels.

Henry L. Thomas was head keeper of Cape Poge Lighthouse from 1919 to 1931, and during this time he assisted several vessels that ran aground or became disabled near the station. In 1921, Keeper Thomas and Albert S. Smith, his assistant, helped refloat the yacht Ladrone from New York and the yacht Dolly from Boston both of which had run aground near the station.

Cape Poge was an isolated place for a lighthouse keeper and his family, and broadcast radio served as way for the stations residents to remain in touch with the world. A newspaper article in 1923 carried an appreciative letter from Keeper Thomas to a radio station:

I am writing you with a great deal of gratitude and pleasure. I am a light keeper and am classed among the shut-ins. We look forward to your Sunday services and enjoy your musical programs especially the dramas. We are located three miles from a small town and are practically alone all of the time and the radio has indeed proved a blessing.

Cape Poge Lighthouse was automated in 1943 when Joseph Dubois was keeper, but the tower remains an active aid to navigation. The keepers house, which was home to a Coast Guard shore patrol during World War II, was sold to a local resident in 1954 and torn down for the lumber. The Fresnel lens has been replaced by a solar-powered 300mm lens, which shows a flashing white light every six seconds.

Located on the northeastern tip of Chappaquiddick Island in the Cape Poge Wildlife Refuge.
Latitude: 41.41882, Longitude: -70.45195

For a larger map of Cape Poge Lighthouse, click the lighthouse in the above map.

If you are up to it, you may walk to the lighthouse, but it is over three miles one way through loose sand. Otherwise, there are two options to get there with a land vehicle. By purchasing a permit, you can drive your own four-wheel drive vehicle to the lighthouse. If you are not going to be on the Vineyard for an extended period, a more economical way to visit the lighthouse is on a lighthouse tour offered by the Cape Poge Wildlife Refuge. There is a free shuttle that will pick you up from the Chappy Ferry, or you can take your vehicle to Chappaquiddick Island and drive to Mytoi Gardens, from where the tours start. For reservations or more information, call (508) 627-3599.

The lighthouse is owned by the Coast Guard and managed by The Trustees of Reservations. Grounds open, tower open during tours.


The Cape Poge Lighthouse tour gives you the opportunity to climb the tower and view some historic photographs and documents housed therein. As you drive along the cape in your oversand vehicle, you will likely learn about the Rosa rugosa, a rose native to eastern Asia that was likely introduce to the island by returning whalers, and have the chance to see birds such as oystercatchers, terns, and gulls....oh, and there is the famous bridge as well.