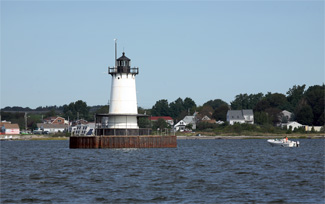 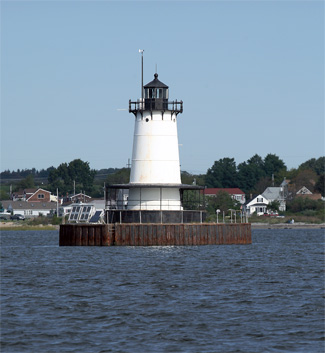 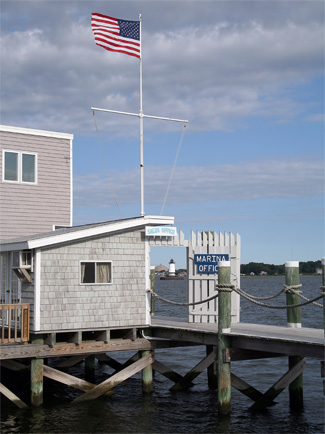 Fall River is home to Borden Flats Lighthouse, firmly planted near where the Taunton River flows into Mount Hope Bay in southeastern Massachusetts, but its most famous resident to date was an accused murderer declared innocent in 1893. More than a century later after the acquittal, Lizzie Borden remains immortalized in the childrens skipping-rope rhyme, which claims she took an axe and gave her mother forty whacks, then gave her father forty-one. Lizzie is the best-known member of the wealthy Borden family, for whom Borden Flats was named. The prosperity of Fall River and the Borden family was due to abundant water resources, textile mills, skilled labor, and the towns prime location on the northeast transportation corridor. The citys industrial rise began in 1811 with the opening of Globe Manufactory by Colonel Joseph Durfee. A few decades later, Fall River had its own newspaper, seven textile mills, and a steamboat shuttling to and from New York City. Industry grew exponentially and drew people from Canada, Portugal, and Great Britain to work in its mills. During the nineteenth century Industrial Revolution, Fall River was heralded as the Textile Capital of the World, peaking with over 100 cotton mills that employed more than 30,000 workers, who jointly earned over $500,000 weekly.

To warn ships away from shoals and underwater rocks at Fall River, $25,000 was appropriated for a lighthouse at Borden Flats on June 16, 1880, following a recommendation by district officers of the Lighthouse Board. Prior to the lighthouse, an unlighted day beacon had marked the danger since at least 1868.

Work on the lighthouse began in 1881 when three sections of an iron pier were sunk in place, leveled, and filled with cement. The cylindrical iron tower and lantern were cast elsewhere and shipped to Fall River in July of that year. The station, which also included a fog bell operated by machinery, was lighted for the first time on October 1, 1881. The following item announced the establishment of the light and fog bell:

Notice is hereby given that on and after Oct. 1, 1881, a fixed red light of the fifth order will be exhibited from the light-house recently constructed at Bordens Flats, Mount Hope Bay, Mass. The apparatus lights 270° of the horizon, and the focal plane is 50 feet above mean low water. The light should be seen in clear weather, from the deck of a vessel 15 feet above the sea, 12 ½ nautical miles.

The structure is an iron tower, standing on an iron pier filled with concrete. The pier and tower are red, the lantern black.

A fog-bell, struck by machinery, will be sounded during thick and foggy weather.

The circular rooms in the tower are twelve feet across with ceilings a little over seven feet tall and provide about 1,000 square feet of internal space. The windows are cased in iron, and a staircase circles the interior walls of the towers five floors. A basement cistern captures rainwater that falls on the lighthouse.

Although the light is not far from the mainland, its remoteness almost led to the death of Keeper Herman Georgy. In September 1897, Georgie was struck by an acute case of appendicitis. His alarmed wife rang the fog bell and waved her arms to flag down passing boats for some time before it was realized that she was not merely in a friendly mood. For two days, he suffered intense agony, wrote the Boston Globe, attended only by his wife.

Keeper Joseph Meyers account of life at the light has been preserved in the stations log, which is now housed in the National Archives. One entry described the storm of October 8, 1907: Violent SW gale. Occasional heavy squalls. 11 a.m.A barge of about 800 tons of coal sank in the harbortwo men drowned, and a sloop of 10 tons was wrecked on the beach.

According to Meyer, winter often found the light surrounded by the frozen sea or chunks of ice. On February 15, 1908, he wrote: Started fog bell at 6:30 a.m. Bell broke 11 a.m.struck by hand until 1 p.m. In 1912, the Boston Globe noted that Meyer was iced in and stranded at the light from January 4 to February 1. Once he finally made it to the mainland, his return was difficult. The tug which brought him ashore was obliged to leave the harbor before he was ready to return, and the keeper set out at midnight for the lighthouse, but got caught in the drift ice and was more than two hours getting back to shore, reported the Globe. In consequence of his absence the beacon failed to shine for the first time in seven years.

Keeper John H. Paul (1912  1927) filled many log pages with tales of the perpetual scraping and painting of the light. But on August 3, 1912, he had a far more eventful day. Paul witnessed a rowboat overturn as two local men aboard changed places. Keeper Paul rushed to his boat and was able to rescue one man, but the other, who was unable to swim, drowned. Paul received a bronze Carnegie lifesaving medal for his heroism that day.

While for Keeper Paul it was the endless cycle of painting that vexed him, for Elaine, daughter of Keeper Joseph Covo (1927  1943), it was the brass. Everything was brass, Elaine said. You polished brass from morning to night with government polish.

During the Great New England Hurricane of 1938, wind-driven seas hit Borden Flats Lighthouse with such force that the tower tipped a bit to the north. The lighthouse retains the slight lean to this day, but a larger caisson was subsequently built around the tower to provide added stability.

Truman Sawyer viewed his time at Borden Flats from November 1955 to December 1956 as punishment. Although the light, refrigerator, and stove were powered by kerosene, the fog-bell still had to be wound by hand. When the light was finally electrified in 1957, the kerosene lamp was retained for backup.

For some time after Borden Flats Lighthouse was automated in the spring of 1963, an onshore civilian lamplighter was paid to flip a switch whenever the fog bell was required, but no one has lived in the light since that time.

A modern optic, flashing white every two-and-a-half seconds, replaced the Fresnel lens in 1977, and an automatic horn took the place of the fog bell in 1983. In 1989, the light was converted to solar power. Inside Borden Flats Lighthouse, a row of batteries, the size of a car engine, power its automated light. The towers biggest room is the covered porch (roughly six feet wide) that wraps around the lighthouse about ten feet above the water.

In 2006, Borden Flats Lighthouse was offered to local, state or federal agencies, non-profits, or historical societies under the National Historic Lighthouse Preservation Act of 2000, however, when no qualified owner was found for the property, it was auctioned off in 2008. Michael Gabriel, a Nevada attorney who had previously won the auctions for Marylands Bloody Point Bar Lighthouse and Fourteen Foot Bank Lighthouse, submitted the winning bid of $55,000 on September 22. Just a month before winning Borden Flats, he entered unsuccessful bids of over $200,000 for two offshore lighthouses in New York Harbor.

Gabriel, who had planned to convert the lighthouse into a microbrewery capable of producing enough beer to pay for its upkeep, defaulted on closing. Despite Gabriels legal wrangling to prevent it, the lighthouse was put back up for sale by the federal General Services Administration on June 30, 2010.

With the backing of his parents Craig and Cindy, Nick Korstad became the new owner of Borden Flats Lighthouse on August 31, 2010 with a bid of $56,569. Korstad bid on the lighthouse, with its cracked concrete, bushels of weeds tumbling out of roof gutters, rusted railings, and gutted interior, sight unseen. This isnt the first lighthouse Korstad has owned, as he won a similar auction for Virginias Wolf Trap Lighthouse in 2006, but after being unable to obtain a loan for the property, he had to sell that lighthouse to another individual.

The terms of sale for Borden Flats Lighthouse require Korstad to preserve the structure, to allow the light and fog horn to continue operation, and to grant the Coast Guard access for maintenance and repairs. Thats fine with Korstad, who said, It is a lighthouse. Thats what I want it to be.

Initially, Korstad didnt have exact plans for the structure, but stated, I want to restore it back to what it was originally, and I want to make it accessible to the public. In 2011, Korstad altered the lighthouses daymark by painting a red band around the middle of the tower. The Coast Guard was fine with the change, as mariners rely mostly on the lights signature. Korstad started offering public tours of his lighthouse in June 2013, and shortly thereafter also opened it up for overnight stays. While the light remains active, visitors dont have to worry about the fog signal, as it was deactivated in May 2013.

In 2017, Korstad placed the lighthouse on the market for $389,900, and it sold the following year. Nick has definitely not lost his enthusiasm for lighthouses as he used the proceeds from the sale of Borden Flats Lighthouse to help purchase Michigans Big Bay Lighthouse. Korstad relocated to Michigan in 2018 to become innkeeper at his new lighthouse. Kevin and Carole Ferias, the new owners of Borden Flats Lighthouse, are committed to keeping the overnight lightkeeper program going that was started by Korstad but also plan to add events like wine tastings and weddings. Some of the people interested in purchasing the lighthouse wanted to make it private. Kevin and Carole Ferias spent a night in the lighthouse to celebrate their twenty-fifth anniversary and want others to have the chance to enjoy the lighthouse.

Borden Flats Lighthouse might one day lure more visitors to Fall Rivers than Lizzie Borden, but with the publics undying fascination with the murders, that isnt likely to happen too soon.

For a larger map of Borden Flats Lighthouse, click the lighthouse in the above map.

Overnight stays at Borden Flats Lighthouse have been offered since 2013.

The lighthouse is privately owned. Tower open for tours and overnight stays.