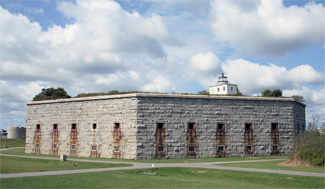 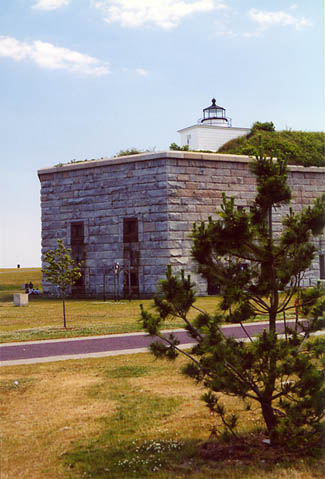 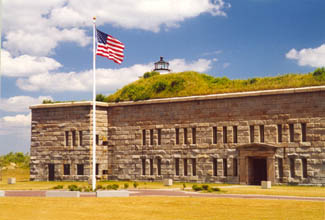 Oil has long been a valuable, highly sought after resource, both in the United States today and in Colonial America. However, in Americas early days, sperm whale oil, which burned clean and bright, was the preferred fuel, and by the 1860s the whalers of New Bedford led the world in its supply. Rather than waiting for the U.S. government to erect a lighthouse to protect their valuable ships and cargo sailing from Buzzards Bay to New Bedford Harbor, local merchants joined forces in 1797 to construct a wooden beacon on Clarks Point at the southern entrance to the harbor. Given the lucrative nature of the whaling business, their willingness to personally safeguard their investment was unsurprising. Whale oil prices did fluctuate, but by 1854, sperm whale oil would reach $3.84 per gallon, which in 2003 dollars would have been nearly $35 per gallon.

The first Clarks Point Lighthouse burned down after approximately a year of use, and was replaced by a second lighthouse that was lit for the first time on October 12, 1799. To speed governmental approval and financial support of the lighthouse, on June 16, 1800, a 134-rod (2,200-square-foot) plot at the end of Clarks Point was deeded for it. The frugal merchants lobbying efforts were rewarded shortly thereafter when on July 29, 1800, Congress voted to accept financial responsibility for the beacon and to appoint a keeper for it.

Congress then committed on March 16, 1804 to spend $2,500 to replace the beacon with a thirty-eight-foot-tall stone lighthouse. Upon raising the lighthouse frame into place, hungry laborers were rewarded with a celebratory 100-gallon pot of chowder. Once completed, the lighthouse sported a fixed white light at a focal plane of fifty feet.

It is not unusual that only sketchy information about the early beacon (as well as some other lighthouses) remains. An October 26, 1899 letter from Naval Secretary Captain Thomas Perry notes that:

The Light-House Board was organized in 1852. Prior to that date the light-houses were under the charge of various officers, sometimes the Commissioner of Internal Revenue, sometimes the Fifth Auditor of the Treasury, and sometimes the Office of the secretary of the Treasury. The records relative to light-houses which were turned over to the Light-House Board on its organization have been carefully preserved, but are exceedingly lacking as to the history of the early light-houses. The fact that very little can be found with regard to the light at Clarks Point is not singular.

In addition to records kept by the Lighthouse Board, information has been preserved by local historical associations, libraries, and individuals.

An 1838 report by Inspector Lieutenant Edward W. Carpender, U.S Navy recommended that Clarks Point Lighthouse should see a reduction to six properly cared for lamps instead of ten, while noting that the lamps were currently not receiving adequate attention. I visited this light in the forenoon, and have good reason to think that fewer lamps, differently attended would afford equal light; one of the lamps was without a fountain, and appeared not to have been used the previous night. Two of the chimneys, or tube-glasses, were broken, and some of the others so much smoked as to show that they had been carelessly trimmed. The reflectors were not bright, and did not appear to have been recently cleaned. He also wrote that the keeper lived in his own home, as no keepers dwelling was provided by the government.

One of the early keepers of the lighthouse was Henry M. Smith, a renowned wood carver who created elaborate figureheads for New Bedford ships. Smith used some of his woodworking skills to help complete a needed keepers dwelling.

During the 1850s, the vessel that delivered supplies to New England lighthouses secretly transported a Negro slave woman and her two children, a boy and girl, to Clarks Point Lighthouse. The trio were sneaked into town from the lighthouse under the cover of darkness and provided with safe haven in New Bedford. The boy, Charlie, grew up there and became a well-known hack driver.

To address the vulnerability of the unprotected New Bedford whaling fleet, a joint local and national plan for a permanent military presence at New Bedford was developed in the late 1840s, but it was not until September 24, 1857, that the U.S. government purchased the Edward Wing Howland farm on Clarks Point so a fort could be constructed. New Bedford merchants must have tired of the long delay, because New Bedford Mayor Isaac C. Taber and the city council developed their own plans for self-defense.

Ironically, future Confederate General Robert E. Lee was one of the forts planners and perhaps later played a hand in helping New Bedford realize its fears. Before the granite fort could be completed the Civil War broke out. Confederate ships patrolling Long Island Sound and Buzzards Bay destroyed many local ships and whaling vessels caught on the open sea.

Although the threats brought by the Civil War ended in 1865, whalers were dealt an economic blow from yet another front. The decreasing number of whales lengthened the voyages that traversed the globe in pursuit of the leviathans to as many as three years, whereas in the late 1700s, whaling trips averaged about nine months. Rising demand and a reduced supply caused the cost of sperm whale oil to soar and spurred the drive for a more economical fuel. The net result was that kerosene would come to eliminate the need for whale oil, and the Lighthouse Board converted all of its lights to this more economical fuel.

In 1865, Clarks Point Lighthouse became the last lighthouse in Massachusetts to lose its old-style lantern room in favor of a more efficient one with larger panes of glass. This new lantern room protected a fifth-order Fresnel lens that had been installed at Clarks Point in 1856.

As the seven-sided, granite fort grew it began to block the lighthouses beam, necessitating the relocation of the lantern room and keepers quarters to the top of Fort Taber in 1869. Lighthouse Board records for that year note: A rectangular tower, 11x20 ½ feet and 8 feet high, has been built in the northerly staircase tower of the fort adjoining the old site by flooring over the stone-work, carrying up the walls with wood-work, putting on a hipped roof covered with tinned iron, with a circular wooden parapet for the lantern, surrounded with an iron railing. To this the lantern, illuminating apparatus, and fixtures, were removed, and the light exhibited from its new position on the 15th of June last. Six panes lantern glass and an oil-cloth for lantern, a new cooking-stove, and wall paper for two rooms of dwelling, have been supplied. To obviate if possible the danger of breaking the lantern glass when heavy guns are fired in the fort, swing frames for two sides of the lantern are now being made. The old tower has not been torn down.

By 1871, it had become apparent that the need for the fort had passed, and its construction was halted. Thus, the ingenious system designed to protect the light from the reverberations of the huge Rodman cannons located directly below it was never tested, as the great guns were never fired.

Amos C. Baker, Jr. took over as keeper of Clarks Point Lighthouse in 1880, following in the footsteps of his father who has served there as keeper before him. Prior to becoming keeper, Amos C. Baker, Jr. spent most of his life at sea, first as a twelve-year-old cabin boy on the whaling ship Messenger, captained by his father, and later as the captain of his own vessel.

Clark Point Light was extinguished on April 30, 1898, after F. Hopkinton Smith completed Butler Flats Lighthouse just offshore from the fort. After twenty-three years of service at Clark Point, Amos C. Baker Jr. transferred to Butler Flats, where his son, Charles A. Baker was made his assistant keeper. In 1929, The Lighthouse Service Bulletin recognized the service of the Baker family at Clark Point with these words:

A. C. Baker, sr., was keeper of Clark Point Light Station from 1872 to 1879, the year of his death, when he was succeeded as keeper by his son, A. C. Baker, jr., who served at Clark Point til it was replaced by Butler Flats station in 1898, and continued in service there until his death in 1911. The latters son, C. A. Baker, at the age of 21, became assistant keeper at Butler Flats station in 1898, succeeding to the keepers position on his fathers death in 1911, and he is still light keeper at this station. Thus there has already been a total service in three generations of this family of 70 years, and a continuous service of 57 years at virtually the same station. It is of record also that the efficiency rating of A. C. Baker, jr., was excellent and C A. Baker has held the commissioners star for a number of years.

The abandoned 1804 tower stood near the fort until it was demolished in 1906.

The isolated location of the deserted lighthouse atop Fort Taber proved irresistible for vandals, who despite its early 1970s renovation, burned and nearly destroyed it. As part of New Bedfords noteworthy plan to restore three local lighthouses (including the Butler Flats and Palmer Island lights), the city relit the restored Clark Point Lighthouse on June 15, 2001, the 132nd anniversary of the lights first illumination.

For a larger map of Clark's Point Lighthouse, click the lighthouse in the above map.

Take Route 18 south in New Bedford. Route 18 will turn into Water Street and then West Rodney French Boulevard. Continue south and you will see Fort Taber Park, with the fort and the lighthouse, at the southern end of the peninsula.

The lighthouse is owned by the City of New Bedford. Grounds open, lighthouse and fort closed.