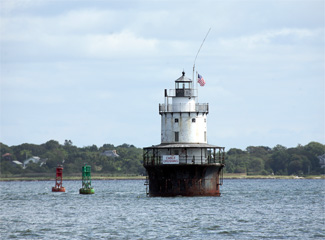 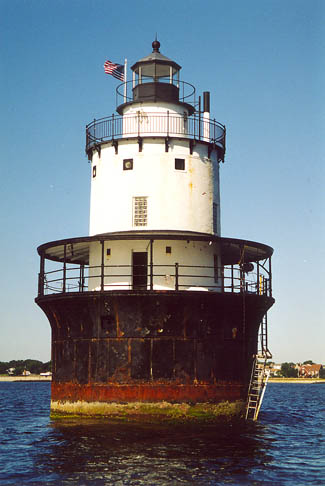 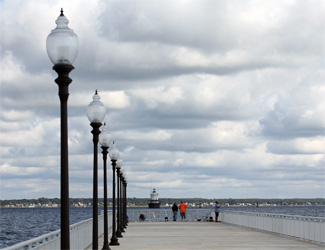 Butler Flats Lighthouse is situated on a mucky shoal at the mouth of New Bedford Harbor and the Acushnet River. Although New Bedford was a major U.S. location for whaling, fishing and manufacturing with rising harbor traffic, getting approval for the new lighthouse was not an easy affair. Years and years of lobbying and agitation were needed to convince lawmakers of its need.

By the 1880s, it had become clear that a new lighthouse on Butler Flats would be more beneficial than the nearby Clarks Point Lighthouse. Some arguments in favor of the new lighthouse were enumerated in the annual Lighthouse Board report of 1889.

The entrance, near buoy No. 9, on the point of Butlers Flats, to the lower harbor of New Bedford is narrow, obscure, and difficult to find in snow-storms, fogs, and dark nights. If a light, with a fog-signal, were placed on that point it would accurately mark the entrance as well as the point where vessels alter their course; would guide them to an anchorage in the lower harbor, and would form, with Palmers Island light, a range very useful in enabling them to avoid North Ledge, Henrietta, and Hurricane Rocks in Buzzards Bay, and greatly benefit navigation. The site is submerged to the depth of about 12 feet at mean low water. The estimated cost of a suitable structure is $45,000.

In 1890, the Lighthouse Board included additional economic arguments in the hopes of swaying Congress:

It is stated by the custom-house authorities that 1,814 vessels entered the port of New Bedford during 1887, not including yachts, fishing craft, or boats. It is also stated that the Vineyard Sound and Nantucket steamers took 75,000 passengers to and from this port and received $22,500 for freight carried. It is further stated that the New York propellers made 104 trips between New York and New Bedford, and received over $100,000 for freight carried. New Bedford is now said to be the third manufacturing city in Massachusetts, and the collector of the port states that about 500,000 tons of shipping came into the port during last year.

The Lighthouse Board repeated the need for a light on Butler Flats each subsequent year until Congress finally approved the required $45,000 on January 22, 1894. The actual appropriation was not made until March 1895, and the renowned writer-artist-engineer-architect F. Hopkinson Smith, who was responsible for the foundation of the Statue of Liberty, designed the lighthouse. Given that the location of the Butler Flats Lighthouse was submerged by about twelve feet at mean low water, Smiths selection was quite reasonable.

Eleven bids for constructing the lighthouse were received, ranging from $32,700 to $63,000, and a contract was signed with William H. Flaherty, who had bid $33,800. Flaherty had recently built Solomons Lump Lighthouse and Smith Point Lighthouse and would later construct Baltimore Lighthouse  all on Chesapeake Bay.

Flaherty prepared a thirty-five-foot-diameter cast-iron cylinder foundation or caisson consisting of circular iron plates on Crow Island, and floated it downriver to Butler Flats where five feet of mud had been dredged away to reveal the hard pan. After the cylinder was properly situated and filled with stone and concrete, the brick rooms of the lighthouse tower were built atop the sturdy foundation. The work was finished in time for the lighthouse to be placed in operation on April 30, 1898.

Every evening a clockwork mechanism needed to be wound to raise the weight, which could fall from the lantern all the way to the cellar, and set the revolving, fifth-order Fresnel lens in motion. Besides its white flash every five seconds, the tower was also equipped with a 4,000 pound fog bell, tolled by an oil-burning Shipman steam engine. The tower was initially red, the color of its bricks, but in 1899, it received a white coat of paint and a 1,000-pound bell with a Stevens striking machine.

When Butler Flats became operational, Captain Amos C. Baker Jr., transferred there from the Clark Point Lighthouse, and his son was made assistant keeper. Upon his arrival in April 1898, Keeper Baker was less than impressed. He wrote, At 7 a.m. took charge of Butler Flats Lighthouse with Charles A. Baker as Assistant Keeper. The lighthouse is new but found it very wet and leaky and very dirty and everything topsy turvy.

Captain Baker, who had begun his career as a twelve-year-old cabin boy aboard a whaling ship captained by his father, soon had everything shipshape. A newspaper reporter, who paid Captain Baker a visit, gave the following description of the tower. The main entrance to the structure . . . leads directly into the kitchen, which is 16 feet in diameter. This room opens directly into the engine room, which can be reached without going outside. In the room are the usual utensils found in a kitchenstove, sinks, closets, sideboard and lockerfor this department is used as a dining room. The drudgery of housekeeping is all on this floor. It is seven feet in the clear, and so well provided with windows that even in the warmest weather it is comparatively cool. Everything is as handy as a pocket in a shirt, and when Mrs. Baker joins her husband next week, for the summer months, she will find everything in readiness for her.

A basement beneath the kitchen held the cisterns that stored rainwater collected from the main gallery roof, plus a storage space and a workroom area. The newspaper described the parlor above the kitchen as the coziest room in the lighthouse. The keepers sleeping quarters were located immediately above the parlor followed by the watchroom, and lantern room.

A glimpse into life at the light can be found in Captain Bakers logs held by the Old Dartmouth Historical Society. His Christmas 1907 entry noted: A pleasant Christmas Day. . . . Squally in the evening, but we had some music from the phonograph so we had sunshine inside.

As at many lighthouses, winters at Butler Flats Light were difficult and potentially dangerous. The Captains daughter Amy recorded: It was grand there in the storm to watch the high waves in a southerly gale come rolling in; the crest of these have several times washed up on the balcony floor which is 18 feet above the water. She also wrote, In the winter ice shakes the light a good deal at times and it is scarcely pleasant to have the chair in which you sit shake and realize what might happen if the ice proved stronger than the iron plates of the caisson.

Captain Amos Baker Jr. always genially greeted visitors, including President Grover Cleveland, who once stopped by. His obituary in 1911 read, For 13 years he lived in Butler Flats Lighthouse. Visitors occasionally came alongside, and Captain Bakers cheery, Come aboard! always made them glad to obey and see the old seamans comfortable house.

Charles A. Baker, who replaced his father as keeper, was alone at Butler Flats Lighthouse in 1938 when the great New England hurricane struck. New Bedford resident Albert Pelletier said, I remember in the hurricane of 1938 looking out there seeing it twist in the water. You know the guys never left it and I dont know how they survived but they did, and the lighthouse never tipped either. It must have a good anchor. Someone later told Baker that while they could see the light from shore, they knew Baker was okay. Charles A. Baker retired in 1941, just two years after the Coast Guard assumed responsibility for the light.

Joseph Hindley started as an assistant at Butler Flats in 1931 and then moved up to head keeper when Baker retired. After he himself retired, Hindley told a reporter of one January night at Butler Flats when two young men attempting to navigate in a homemade skiff overturned in rough water near the lighthouse. Keeper Hindley went to their aid and managed to help them and their boat up onto the lighthouse. Many were the times that Hindley had to help exhausted swimmers out of the water after they tried to reach the lighthouse from shore.

Hindley had his own close calls as he rowed to shore to spend his free days with his family. On one occasion he was almost trapped in ice while try to reach shore, and in another, his rowboat capsized on a return trip to the light, spilling him and his groceries into the water. Hindleys favorite story was when a rumrunner sped by and splashed him with water while he was trying to paint the lighthouse. Be darned if that fella didnt turn back and come tell me he was sorry, Hindley said.

Following the decommissioning of Butler Flats Lighthouse in 1978, it was leased to the City of New Bedford, which restored it through the efforts and financial support of local businesses and individualsincluding some labor from a less conventional source. Through a cooperative program organized by New Bedfords mayor and the Bristol County Sheriff, Bristol County House of Correction inmates rewired the electrical system, sanded the walls, stairwells and ceilings, and replaced the floors. The City of New Bedford obtained a license in 1979 to operate the lighthouse as a private aid to navigation.

On May 15, 2012, Butler Flats Lighthouse was made available under the National Historic Lighthouse Preservation Act of 2000 to eligible federal, state, and local agencies, non-profit corporations, educational agencies, and community development organizations for educational, recreational, cultural, or historic preservation purposes. Interested entities were given two months to submit a letter of interest expressing their desire to submit an application for ownership. When no qualified owner for the lighthouse was found, an online auction for the structure was initiated on August 5, 2013.

As part of the auction, a site inspection was scheduled for November 13, 2013 with the following day as a backup day. Weather prevented the boat trip out to the lighthouse on the thirteenth, but the seven interested parties who had submitted a $10,000 deposit did manage to reach the lighthouse on the fourteenth only to find that a broken ladder prevented access to the lighthouse. Gary Linck, who had driven eight hours from Virginia to check out the lighthouse, said I blame Obama, when asked if he was disappointed about the aborted landing. Its federal property, he added. They should have done their research before they put it up for sale.

The online auction was canceled, and a new one was initiated on September 9, 2015. Six bidders participated in the 2015 auction, which ended on November 23 with a high bid of $80,000. The buyers formed a non-profit organization called Mass Light to maintain the lighthouse. In May 2019, the New Bedford City Council approved a $250,000 grant to stabilize and repair the towers caisson foundation and concrete deck. One council member took issue with giving community preservation money to private individuals, but others claimed the lighthouse would restore the aesthetics of their neighborhood. The directors of Mass Light, Robert and David Draper, have pledged to make the lighthouse available for the use of community-based organizations.

For a larger map of Butler Flats Lighthouse, click the lighthouse in the above map.

This light is best seen from the water, and good views are possible from the Martha's Vineyard and Cuttyhunk ferries that depart from New Bedford. For a decent view from land, take Route 18 south in New Bedford, which will become Water Street. From Water Street, turn left onto Cove Street and then right onto East Rodney French Boulevard, from where you can see the lighthouse.