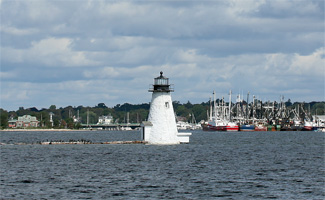 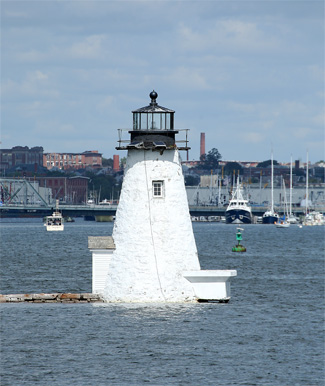 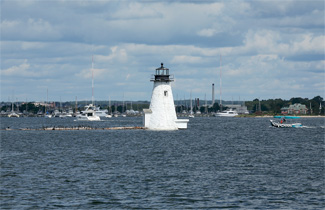 As residents of the nations whaling capital in the mid-1800s, New Bedford shipowners and sea captains vigorously petitioned for the construction of a light to mark their harbor. A March 3, 1837 act of Congress approved $2,000 for the building of a beacon light at the mouth of New Bedford Harbor, but Inspector I.W.P. Lewis noted in his 1842 survey that a lighthouse on Palmer Island was additionally required and would add materially to the facilities required on entering this important harbor. It took five years before the U.S. government finally appropriated $3,500 for the lighthouse on August 14, 1848, and an acre of land on Palmer Island was purchased the following year. The contract to design and build the lighthouse went to architect Charles M. Pierce, and Palmer Island Lighthouse, with its conical, twenty-four-foot-tall stone tower and birdcage-style lantern, was erected in 1849 on the northernmost tip of the island using rubblestone, and wooden doors and floors. The lighthouse was connected to the higher part of the island, where the wooden keepers dwelling was located, by a walkway, and the project came in $173 under budget. Keeper William Sherman first lit the towers lamps on August 30, 1849.

To protect the lighthouse, a ninety-nine-foot-long seawall was built in 1852 on the east side of the island. Later that same year, New Bedford whaling merchant Samuel Rodman experimented with whale oil as an illuminant at Palmer Island Lighthouse. For the seventy-nine-and-a-half gallons of oil used in his trials, Rodman billed the government $105.80  an amount equal to the average cost for lighting Clarks Point Lighthouse over a similar period. Initially, the government balked at paying for Rodmans experiment, but later reimbursed him, even though the use of whale oil was not adopted at that time.

In recognition of Palmer Island Lights importance, in 1853, New Bedford commissioned a new city seal with a view of the Northerly extremity of Palmers Island, with its Light House, of a whale ship under sail in the harbor, of a Steamboat passing out by Palmers Island and the City of New Bedford in the distance, from local jeweler and engraver James T. Almy. The seal bears the motto, Lucem Diffundo, which is translated as, I spread the light or I diffuse the light. At its peak in 1857, New Bedford was the worlds richest city per capita and held all the federal contracts for the supply of whale oil for the countrys lighthouse system.

In 1856, Palmer Island Lighthouse was one of twenty in the district to receive a new fifth-order Fresnel lens. The tower was outfitted with a new lantern in 1863.

Life was not always pleasant for the keepers on Palmer Island. George Cowie, who served from 1874 to 1891, complained of brackish well water and soot from New Bedfords factories that blew across the island, contaminating the cistern. Whether his complaints were addressed or not is unclear, but a 1931 inspection would list the same water problem.

In 1885, the Lighthouse Board requested $200 for a light on a bridge linking New Bedford and Fairhaven:

A small light is needed here, to be used as a range-light in connection with the Palmers Island light, and to assist vessels to enter New Bedford Harbor at night. It need be visible but about 4 miles, so as to be seen beyond Butler Flat, a point 2 ½ miles from the city, where there is a turn in the channel, which at that point is but about 200 yards wide. The light now in use is formed by the insertion of a red pane of glass in one of the street lamps on the bridge. It is maintained by private parties, and is faint, insufficient, and liable to various interruptions.

A red light was exhibited from a small, wooden tower mounted on Fairhaven Bridge to serves as a rear range light with Palmer Island Light, and it served until 1891, when the role was assumed by a white electric light established on mill No. 3 at Wamsutta. The rear range light was no longer needed after the completion of Butler Flats Lighthouse in 1898. In 1900, a 1,260-pound fog bell and striking mechanism were placed in a new pyramidal wooden tower constructed on Palmer Island. Later, the fog bell was moved to a structure attached to the lighthouse, with an access door cut in the tower. An oil house was built on the island in 1905.

Keeper Arthur Small moved with his wife Mabel and two sons from Boston Harbors Narrows (Bug) Light to Palmer Island in 1922. One of three brothers who were all lighthouse keepers, Arthur Small was a gifted artist who concentrated on nautical themes and frequently painted scenes on Palmer Island. Historian Edward Rowe Snow wrote in Lighthouses of New England that Small was probably the greatest painter who was ever in the lighthouse service.

While some may think the life of a lighthouse keeper to be ideally peaceful or perhaps even boring, Small described the responsibility borne by keepers:

It is a popular idea that there is very little to do except for striking a match once a day to light the lamp. Few of these landlubbers realize that if a fog comes in during the middle of the night the keeper must be ready to turn on the fog signal at once, for if the fog bell is silent for a moment it could happen that a vessel may be feeling her way up into the harbor depending on the ringing of the fog signal for her safety.

The channel in New Bedford Harbor is so narrow that if a large vessel went down, all shipping in or out of the harbor would be at a standstill. The coal for the electric light company could not reach the pier, and the cotton steamers likewise would be seriously crippled. That is what makes me angry when I hear of the easy job of a lighthouse keeper, as described by some fair weather sailor or inland resident.

Keeper Small loved his work and took his role quite seriously, but scoffed at the so-called heroism of keepers; although years later his words would come back to haunt him.

Whenever they say anything about a lighthouse keeper, Small said, they always act as if he were some kind of hero. Were not heroes. Here I am on this island, perfectly safe, working and painting pictures, while you wander around in New Bedford, crossing streets with automobiles and trolley cars whizzing by, just missing you by a few feet. Why, you people take more chances in a week than I do in ten years.

A 1931 Palmer Island inspection report listed a fourth order Fresnel lens with a fixed green light, its focal plane thirty-four feet above mean high water. The report also noted a problem with soot in the drinking water, and that the dwelling was old but in fair condition.

On September 21, 1938, the worst hurricane in New England history, The Great New England Hurricane, battered the south-facing coastline catching everyone unaware. A Weather Bureau bulletin had predicted wind velocity in the area would probably not top fifty or sixty miles an hour. And although the eye of the storm, with its 120-mile-per-hour winds and gusts as high as 175-186 miles, would not pass directly through New Bedford, the damage wrought in the area was nonetheless immense.

Realizing the necessity of lighting the lamps that afternoon, fifty-three-year-old Arthur Small left his wife in the oil house, which he considered relatively safe as it was situated on the islands highest point. As he strained to cross the 350 feet from the house to the tower in the raging wind, he was struck by a wave that sucked him under and slammed him against a metal fence. He swam for his life, and as he struggled to regain his footing found his wife attempting to launch a rowboat to come to his aid. He cried out for her to stop, but the wind tore away his words. Small could only watch in helpless horror as a massive wave swept away his wife, the dory, and the boathouse, and destroyed everything on the island except the lighthouse tower and oil house.

Later Keeper Small was to relate, I was hurt and she knew it. Seeing the wave hit the boathouse was about the last thing I remember. I must have been hit by a piece of timber and knocked unconscious. I came to some hours later, but all I remember was that I was in the middle of some wreckage...

Despite being injured and in shock, Arthur Small made it to the tower where he lit Palmer Island Light, unable to leave the tower until the storm calmed. Two friends rowed out to the island in the morning where they discovered the keeper and took him under police escort to Chelsea Marine Hospital. There, he regained consciousness two weeks later and learned that his wife had perished.

Besides his wife, Small lost $7,500 in savings (which his wife was wearing in a canvas bag tied around her waist), many of his paintings, and his library of several hundred books. Keeper Small was granted a two-year absence with pay, after which he retired.

Franklin Ponte filled in as keeper after Arthur Small, and he was followed by Andrew Zuius, who was serving as keeper of Rhode Islands Bullocks Point Lighthouse when it was nearly destroyed by The Great New England Hurricane of 1938.

After a hurricane wall was built in New Bedford Harbor in 1963, the lighthouse was no longer needed. The proximity to this wall made Palmer Island more accessible to lighthouse seekers and vandals alike. In 1966, an arsons fire gutted the tower and nearly destroyed the lantern room.

Ownership of Palmer Island passed through many hands, including that of radio station WBSM, until in 1978, the City of New Bedford took it over from Norlantic Diesel. Local residents spearheaded a restoration that was completed in 1989, but unfortunately, vandals struck again, and Palmer Island Lighthouse remained dark and abandoned throughout most of the 1990s.

New restoration efforts, including a new paint job and various repairs by inmates in the Bristol County Sheriff Departments Pre-Release Program, culminated in a ceremony to mark Palmer Island Lights 150-year anniversary in 1999. New Bedford Mayor Fred Kalisz passed out lighted oil lanterns and a procession of three whale boats sallied forth to return the flashing white light to Palmer Islands newly restored lantern room. When the Mayor waved his lantern in the air, the new 250-mm solar-powered light, with its signature white flash every seven-and-a-half seconds, was switched on.

For a larger map of Palmer Island Lighthouse, click the lighthouse in the above map.

The lighthouse is accessible at low tide from the hurricane dike or by private boat. To reach the wall, take Route 18 south in New Bedford and turn left onto Cove Street. Make a quick left onto Morton Ct. then right at Gifford Street which will take you behind some industrial buildings, where you can park and access the hurricane dike.

The lighthouse is visible from the Cuttyhunk Ferry, from the Martha's Vineyard ferry, and from harbor tours.

The lighthouse is owned by the City of New Bedford. Grounds open, tower closed.