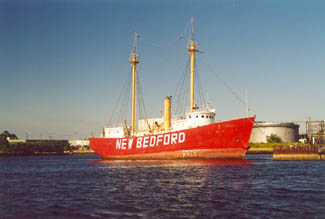 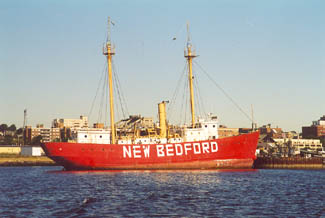 New Bedford never was an official lightship station, but in 1975 the city gained control of LV 114, brought the ship to its waterfront, and painted NEW BEDFORD in bright white letters on its sides. After failing to maintain the vessel, the city sold the nearly worthless lightship for scrap. New Bedford, however, hasnt lost its only lightship connection, as its central waterfront is home to the U.S. Lightship Memorial, which honors the heroes of the old United States Lightship Service, who gave their lives in service to fellow mariners.

LV 114 was built by Albina Iron Works of Portland, Oregon, at a contract price of $228,121. After her launching, the lightship left Portland on August 5, 1930 and arrived at her first station, Fire Island, New York, on September 20. The journey covered 5,892 miles and included layovers at San Francisco, San Pedro, Balboa (the Pacific entrance to the Panama Canal), Navassa, Charleston, and Portsmouth.

LV 114 served at Fire Island Station until 1942, when she was withdrawn, armed, and placed into service as an examination vessel during the remainder of World War II. The threat to shipping on the east coast of the United States was real as the crew aboard LV 114 noted in the ships log on Christmas Day, 1941 that the flares of a prowling German U-boat had been spotted.

Following the war, buoys were deemed sufficient for Fire Island Station, and LV 114 was assigned to Diamond Shoals, roughly fifteen miles offshore from Cape Hatteras, North Carolina. During World War I, a German U-Boat sunk LV 71 at this station after the crew of the lightship was allowed to abandon ship.

LV 114 was stationed at Diamond Shoals for just two years, before beginning service as the Relief lightship for the first district in 1947. After eleven years of relief duty, LV 114 was assigned to Pollock Rip Station in 1958. This station was located about four miles off Monomoy Point and served to mark the eastern entrance to Nantucket Sound. When Pollock Rip Station was discontinued in 1969, LV 114 was assigned to the Portland, Maine Station, where she would serve for two years before being decommissioned on November 5, 1971.

The Coast Guard had plans to use LV 114 as a mobile museum, but when this use failed to materialize, the lightship was awarded to the city of New Bedford in 1975. The following year, the lightship underwent a makeover and starred in the citys bicentennial celebration, but after that, little was done to preserve or promote the vessel. Long neglected, the lightship rolled over and sunk at its pier on May 31, 2006, when an open port window allowed the ship to flood during a heavy thunderstorm. The City of New Bedford paid $212,000 for Sea Roy Enterprises to right the ship and another company to clean it.

In September 2006, the city tried to auction off the lightship with an opening bid of $25,000, but no bidders stepped forward even when the minimum bid was dropped to $10,000. Buyers were most likely scared off by a clause in the sale that would have made them assume liability for removing the ships historical artifacts. After this failed attempt to rid itself of the unwanted lightship, the city had twenty historical artifacts, including portholes, foghorns, and the ships whistle, removed from the vessel and then in December put it up on eBay, where after four days of bidding, it sold for $1,775 to Sea Roy Enterprises. The city, however, had reserved the right to reject any and all bids on the lightship, and decided not to dispose of the vessel for such a small sum. Finally, after protracted discussion, Sea Roy Enterprises agreed in late May 2007 to pay the city $10,000 for the lightship.

In late June 2007, a giant mechanical claw tore through the hull of Lightship New Bedford, starting the multi-day task of dismantling the vessel. Workers used blowtorches to help separate the shredded lightship into heaps of steel, brass, and aluminum parts, which were sold to various salvage yards.

Marty Krzywicki co-founded the Lightship Sailors Association in 1999 to honor lightship sailors and help preserve the few remaining lightships. When asked by a reporter how he would feel if LV 114 was scrapped, Krzywicki replied, Id be heartbroken. This is a ship my life depended on when I served on it. For some, it truly was heart wrenching to see a lightship that was on the National Register of Historic Places be torn into small pieces, but some residents of New Bedford felt the lightship had no real connection to the city and that the citys precious resources would be better spent on other properties.

New Bedford has not lost all of its lightship history as it will always be home to the U.S. Lightship Memorial, erected to honor those sailors lost on the Vineyard Sound Lightship (LV 73) when it went down off Cuttyhunk Island in Great Atlantic Hurricane of 1944. Edgar Sevigny, captain of the lightship, was a resident of New Bedford, and his daughter, Marie Sevigny Callihan, helped unveil the memorial in 1999. The memorial features the bronze fog bell recovered from LV 73 in 1963 and also has plaques on its base to recognize sailors lost aboard Cross Rip Lightship (LV-6) when it sank in 1918 and Nantucket Shoals Lightship (LV-117) when it was rammed by the S.S. Olympic in 1934. A white marble cenotaph, inscribed with the names of the five New Bedford men who lost their lives with the sinking of Nantucket Shoals Lightship, was dedicated at New Bedford on May 15, 1935, the first anniversary of the tragedy, by a group of New Bedford residents known as the Nantucket Memorial Committee.

For a larger map of Lightship New Bedford LV 114/WAL 536 Lighthouse, click the lighthouse in the above map.

The lightship was sold as scrap and cut into pieces in 2007. The map on this page is centered on the U.S. Lightship Memorial.


If you are a fan of Herman Melville's Moby Dick, it is definitely worth stopping at the Seamen's Bethel and the New Bedford Whaling Museum, while you are in the area.