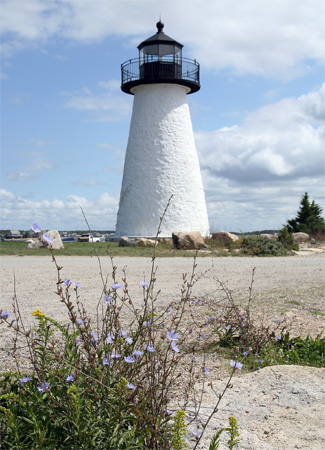 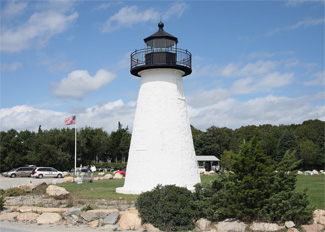 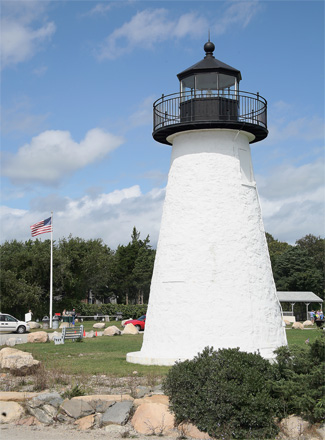 Two unrelated uncles bracket the history of Neds Point Lighthouse. One, Uncle Leonard, played a key role in the birth of the lighthouse; while the other, Uncle Toby, was a keeper there just before automation.

Neds Point, located on Buzzards Bay near the town of Mattapoisett, Massachusetts, takes its name from a former owner of the land, Edwin Ned Dexter. Mattapoisett was settled in 1750 and officially incorporated in 1857. There is evidence of Wampanoag Indian settlements, including burial grounds, throughout the town, and, in fact, the word Mattapoisett is Wampanoag for a place of resting.

Early industry included logging and farming, but Mattapoisett became best known as a center for shipbuilding and whaling. Some 400 ships were built in the towns shipyards from 1740 until the 1870s, including the Acushnet, the ship that Moby Dick author Herman Melville sailed on and later deserted. The town supplied many of the whalers used on the East Coast in the first half of the nineteenth century. The last one, the Wanderer, was built in 1878, shortly after the discovery of oil in Pennsylvania.

It was in 1837, during Mattapoisetts run as a significant shipbuilding harbor, that Neds Point became home to a lighthouse after Congressman (and ex-president) John Quincy Adams helped convince Congress to approve $5,000 for the project.

The government paid $240 for the four-acre site to H.H. Edwards, through his guardian Barnabus Hiller. The contract to build the tower and keepers dwelling went to a local businessman by the name of Leonard Uncle Leonard Hammond. Given the shameful results of his efforts, he can hardly be considered a benevolent uncle.

When construction fell behind schedule and an inspector showed up in town, Uncle Leonard hustled the man off to another of his businessesa tavernwhile his flustered crew flew about to make the project appear completed. In lieu of a proper floor in the tower, they balanced wooden planks over barrels. When Uncle Leonard and the inspector arrived, the inspector put one foot on the end of a loose board, which immediately flew out from under him, rudely depositing the man unhurt, but furious, in the foundation.

Beach rubble was used to build the thirty-five-foot stone tower, which featured a cantilevered, mortar-less, granite staircase that led up to a cast-iron birdcage lantern room. Whether Uncle Leonards avarice, lack of skill, or the struggle to meet tight financial and time constraints led to the deplorable conditions at the lighthouse, it was the keepers who for years afterwards paid the price for the shoddy work. Most of the early keepers at Neds Point remained only a few years, until the twenty-year split term of the former stage coach driver Larnet Hall, Jr. (1848  1853 and 1859  1874).

The lights terrible state was recorded in 1838 by Lieutenant Edward Carpender just a few months after the activation of the light in March:

This light has recently been erected, and consists of eleven lamps, with thirteen-and-a-half-inch reflectorssix in the lower, and five in the upper tier Metapoiset is a place of little or no resort, except for its own trade, which is small; consequently, there are many nights when a light is of no use whatever in this harbor; yet we find more lamps here than in three-fourths of the light-houses in the district.

The tower and dwelling here are of stoneThe keeper informs me that, in the late storm, both buildings leaked in all directions. The unskilfulness of the work extended to the lantern, the dome of which likewise leaked, rendering it prudent for the keeper to remain by the lamps during the rain, lest the light should become extinguished. I removed the surface of the mortar or cement, in several places, and found the stone to be laid in what appeared to be little more than mere sand. The glazing of the lantern was to have been of Boston double-crown glass, but evidently glass of the thinnest kind has been used, the quality of which is nothing more than ordinary. I found the lantern to be only five feet eight inches high, which is too low, again, for the convenience of the keeper with his hat on.

Carpender recommended that the lights eleven lamps be reduced to four, which would save some of the 300 to 400 gallons of oil burned annually. Three of the eleven lamps were even reflecting their light inland.

In winter, keepers would haul weighty buckets of whale oil from the oil house, sometimes in gale force storms, to warm it on the stove on the lighthouses ground level. From there, they would lug the oil up the thirty-two stone steps to the lantern room, where they were kept busy trimming and tending the wick to keep the beacon burning bright through the night.

Many stories about Neds Point Lighthouse reveal not only the harsh life of the keeper, but also that of his wife, who would often tend vegetable plots and animals to supplement their food supply. When the keeper was ill, his wife would often have to take over his duties as well.

An 1850 inspection report noted that everything was in first-rate order and neat as a pin, while the following year the lighthouse was described as badly built and leaky. That reversal may reflect the Federal Governments widespread investigation of lighthouses by military officers and civilian scientists in 1851. For thirty years, lighthouses had fallen under the review of the tightfisted Treasury Department auditor Stephen Pleasanton, which was believed to have resulted in Americas lights being some of the worst in the world. Complaints and the resultant audit inspired the formation of the Lighthouse Board.

In 1856, the tower at Neds Point received a fifth-order Fresnel lens, but it was not until 1868-69 that substantial renovations to the keepers house were undertaken. These renovations included:

In 1878, a new tower was requested. The cost for the tower and general repairs to the keepers dwelling was estimated at $5,000. A repeat request was submitted in 1879, but it was not until 1888, following its near destruction by a hurricane, that the original stone house was demolished and a frame house erected on the foundation. The present lantern room was installed in 1896, and a brick oil house was constructed in 1907.

Following seventeen years as keeper of Bird Island Lighthouse (which required rowing out to the island), advancing age and poor health prompted Zimri Tobias Uncle Toby Robinson to transfer to Neds Point in 1912. Along with the transfer came a $50 salary cut to $600 a year. After Toby suffered a stroke, Jerry Robinson assumed the bulk of the work until Toby died in 1914. Russell B. Eastman, the final keeper, was appointed to replace Toby.

When the light was fully automated in 1923, the keepers house was loaded onto the scow Eva and floated across Buzzards Bay to Wings Neck Lighthouse in Bourne, where it was used for that stations assistant keeper. Rumor holds that Eastman remained inside the house cooking his breakfast as it floated across the bay. This structure remains standing today as a private residence.

In 1937, an error resulted in the thirty-five-foot, cone-shaped, whitewashed stone lighthouse being put up for sale to the lowest bidder. So as not to be underbid, James Stowell of Mattapoisett quickly sent in his bid of one cent accompanied by the following note: I read the enclosed adv[ertisement] that the Neds Point lighthouse property is soon to be offered for sale to the lowest bidder. I therefore enclose herewith the sum of one cent  my bid and payment in full. Please have the necessary papers made out to me and forwarded at your earliest convenience. Concerned officials at the treasury procurement division quickly checked their records and found that the original order stated that the government would open bids on June 7, 1937 and sell to the highest bidder, but somewhere between Washington and Massachusetts, highest had been changed to lowest.

Sixteen people bid on the four-acre lighthouse property, including E.R. Coran, a disabled veteran, who offered $4.98 and one-fifth of my life in service in any capacity that the Government may choose to consume it. The highest offer received was $3,500, and as the government was required to receive at least fifty percent of the propertys assessed value of $19,050, all bids were rejected.

The Coast Guard decommissioned Neds Point Lighthouse in 1952, and the majority of the lighthouse grounds, with the exception of the lighthouse itself, was sold to the town of Mattapoisett in 1958. The light was reactivated in 1961 with a new modern lens having a six-second isophase characteristic  a white light on for three seconds, alternating with three seconds of darkness.

In 1993, the local Coast Guard Auxiliary Flotilla adopted Neds Point Lighthouse and renovated the tower in 1995  1996. Repairs to the tower, which included painting and repairing cracks and leaks, were carried out in August 2011.

During the summer of 2020, four auxillary Coast Guard members, who have been looking after the lighthouse and giving tours, formed the Friends of Neds Point Lighthouse to raise funds to restore the lighthouse. The groups first goal is to remove the lead paint from the interior. After that, the glass in the lantern room will be replaced, and the railing surrounding the lantern room will be welded. Diminutive Neds Point Lighthouse is one of the shortest remaining working lighthouses on Buzzards Bay, but it has a lengthy and rich history.

For a larger map of Ned's Point Lighthouse, click the lighthouse in the above map.

From I-195 take Exit 19 and follow North Street south to Mattapoisett. When it ends, turn left onto Water Street, which will turn into Beacon Street as it bears to the right. Beacon Street will become Ned's Point Road, which ends after 0.5 miles at Veterans Memorial Park, where you will find the lighthouse.

The lighthouse is owned by the Coast Guard. Grounds open, tower open during tours.