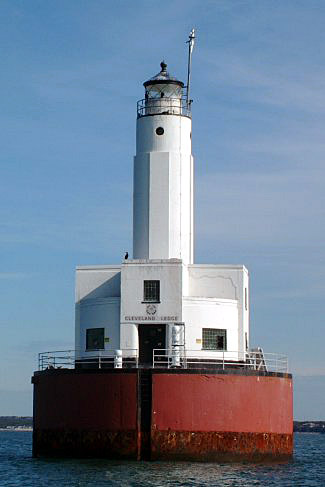 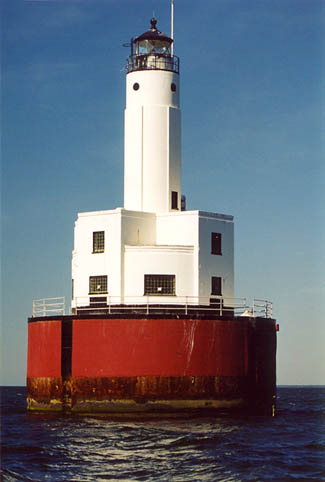 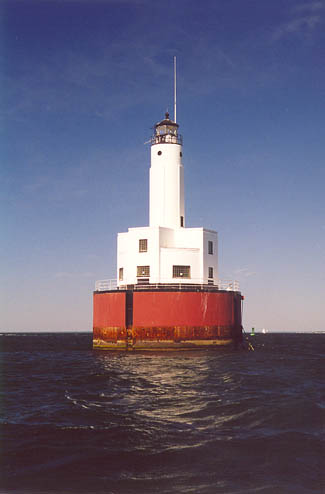 The beautiful, white lighthouse at Cleveland Ledge is a rare example of an Art Moderne lightthe only one of its kind in New England, as well as New Englands very last commissioned lightyet for three years the government was unable to give it away.

Situated roughly two miles from the nearest shore, Cleveland Ledge Lighthouse rests atop Cleveland Ledge on the eastern side of the southern entrance to the channel approaching Cape Cod Canal. The ledge owes its name to President Grover Cleveland, who, following his second successful presidential election in 1892, established the first summer White House at Grey Gables mansion in Bourne. The vacationing president would often spend time fishing in Buzzards Bay near the ledge such as this day noted by a newspaper: Sept. 4, 1894 The president and Dr. Bryant spent all day fishing on Clevelands ledge, off North Falmouth, returning after 6 oclock. While Grey Gables was unfortunately destroyed in a suspicious fire in 1974, there is still hope for the lighthouse, as it was sold to a private owner in 2010.

Simply for the cost of maintenance, any federal, state or local agency or a non-profit, such as a historical society or educational group, could have claimed ownership of the lighthouse under the National Historic Lighthouse Preservation Act of 2000. However, there was a catch.

Since the Coast Guard performed three weeks of renovation in 1990, very little work had been done on the structure. James Walker, president of the Cape Cod chapter of the American Lighthouse Foundation, said whoever took over the lighthouse would need deep pockets for renovation.

With a lot of money and a dedicated individual Cleveland Ledge Lighthouse could be made suitable for visitors, Walker said. It can be a very pleasant place, but perhaps not as a place to live, because it remains an active guide to navigation with a 190-millimeter optic flashing white every ten seconds and an automated fog horn that can sound every fifteen seconds in periods of limited visibility.

Cape Cod Canal, an artificial waterway that connects Buzzards Bay with Cape Cod Bay, was completed in 1916. After Congress appropriated $50,000 on August 1, 1914 for canal lights, twelve acetylene-lighted pile dolphins were placed in Buzzards Bay to mark the southern approach to the canal, and an electric light and fog bell were established atop an iron tower on a breakwater at Sandwich to mark the northern approach. In addition, a gas buoy was established on Cleveland Ledge and at other locations along the Buzzards Bay approach, and the light and fog signal on Wings Neck were improved.

After a German U-boat shelled a tug near the canal during World War I, the government assumed jurisdiction over the then private operation. The United States Corps of Engineers soon re-dredged the canal to a depth of twenty-five feet, and then in 1928 the government purchased the canal for $11,400,000 and began operating it as a free public waterway. Between 1935 and 1940, $21 million was spent increasing the width of the canal to 480 feet and its depth to thirty-two feet. These improvements made the canal a viable shortcut for vessels of all sizes and prompted the need for a permanent light to better mark Cleveland Ledge and the southern entrance to the canal.

A $198,851 contract for the construction of Cleveland Ledge Lighthouse, the first first major station to be built since the consolidation of the Lighthouse Service with the Coast Guard in 1939, was awarded to the J. F. Fitzgerald Construction Company of Boston. The towers metal caisson foundation was fabricated at the Thames shipyard in New London, Connecticut and then towed to the ledge by commercial tugs, aided by the Coast Guard ship Pequot, during a nineteen-hour period on October 7, 1940. The fifty-two-foot-tall caisson was sunk into the ledge in twenty-one feet of water.

As World War II continued to escalate overseas, the decision was made to transfer the lighthouse to the government in September 1941 before its completion. The light, foghorn, and radiobeacon equipment had only recently been installed. After the United States entered the war, materials needed to complete the lighthouse grew scarce, and Cleveland Ledge Light was not put into service until June 1, 1943.

The top of the fifty-two-foot-in-diameter caisson serves as the base for a two-story, reinforced concrete building. The first level of this structure is circular with eight distinct faces that feature a door or window. The second level is a cross-shaped structure stacked on the first level, with windows placed on each end of the cross. The first and second levels served as living and work quarters, while below the main deck were found the engine room, fuel tanks, and four water tanks that could hold 4,800 gallons. Atop the cross-shaped second level, a cylindrical, concrete light tower rises another fifty feet. The towers lantern room originally held a fourth-order Fresnel lens.

Just over a year after being commissioned, the new light would face the grueling test of the 1944 Great Atlantic Hurricane. Powerful winds first drove waves into the lighthouse from the southeast, before shifting not long after midnight one evening to the southwest and taking out the glass block skylight on that side of the building. Immediately, tons of water flooded into the lighthouse.

Lieutenant Olie P. Swenson and his eight-man team sped into action. Down in the engine room they grabbed pails and began to bail, throwing water into the porcelain laundry tub as fast as they were able, with each wave bringing more water crashing in from overhead. Some of the men tried to block the hole, but were tossed about by the force of the waves. The water continued to rise, taking out electrical appliances with a flash as they short circuited one by one. By the time the men were finally able to build a barricade of mattresses, oil drums, and wooden boards to block the hole, water was barely two inches below the top of the batteries.

The nine men, accompanied by their truly frightened wire-hair terrier, lost their radio and telephone, but managed to keep the light burning despite waves nearly forty feet over the high water mark. A half-smashed launch hanging from davits at a height of forty feet attested to the magnitude and power of the waves.

Every member of the crew will frankly admit today that he was surprised and, to put it mildly, gratified that the hitherto untried cement and steel structure withstood the storm, a newspaper reported. All had misgivings about their immediate futures at one time or another throughout the night, and during those hectic, fearful hours during which they alternately hoped and prayed that the next wave wouldnt be the one to bowl them into the sea.

The crew of the Vineyard Lightship, stationed at the entrance to Buzzards Bay and Vineyard Sound, were not so fortunate. The ships commanding officer requested permission to seek shelter from the storm, but his request was denied. Sometime in the early morning hours of September 15, 1944, a bright flash was seen from shore shortly before the lightship disappeared. The Vineyard was eventually found in eighty feet of water with her masts and smokestack snapped off at the deck but with her moorings still attached. Twelve crewmembers lost their lives in the sinking.

Jim Walker was on Cleveland Ledge Lighthouse in April 1963 when the USS Thresher sunk 220 miles off Cape Cod. The Navy dispatched several vessels to search for the Thresher, and one night, not long after the accident, the crew aboard the lighthouse received a call from the Corps of Engineers warning that a nuclear submarine was headed directly toward them. The crew scurried out to the rail and could see the red and green lights of the submarine bearing down on them. Just before reaching the lighthouse, the submarine turned, but the experience left the crew a bit shaken.

The lighthouses interior was described as spit and polish spotless and as warm as toast from the large oil furnace in an article written in December 1967. The four men who worked the station at that time had a lounge with a small television, a gallery, lavatory, and sleeping quarters. They worked for two weeks, then had one week off. Supplies were hauled up to the lighthouse in a sling from the Woods Hole Coast Guard patrol boat that came by weekly.

In 1978, an underwater cable was laid to supply power to automate Cleveland Ledge Lighthouse. The Coast Guard crew was removed that September, and the lighthouse sealed.

In the 1960s, James M. Howe of North Falmouth would often visit the Coast Guard keepers at Cleveland Ledge with his two brothers. The boys would supply the keepers with newspapers and were recruited to help with painting and repairs at the station. With these memories as inspiration, Howe obtained a lease for the lighthouse in 2005, but passed away in December of that year.

In October 2010, the General Services Administration opened an auction for the lighthouse seeking an individual inspired to pay for and then look after Cleveland Ledge Lighthouse. After a bidder codenamed OldSalt2 bid $10,000 for the lighthouse on October 13, three other bidders engaged in a bidding war that eventually ended on December 14, when hadley placed the winning bid of $190,000.

The winning bidder was later identified as Sandy Boyd of Emeryville, California who owns a dozen or so coffeehouses on the West Coast. As of 2012, Mr. Boyd was going through the permitting process to convert the lighthouse into a vacation home. Mr. Boyd spends summers in Nantucket, and his father was captain of the submarine USS Permit, so he is familiar with Massachusetts and things nautical. After renovations, the lighthouse may even be opened up to lighthouse junkies for overnight stays.

For a larger map of Cleveland Ledge Lighthouse, click the lighthouse in the above map.

This light should be viewed from the water. We chartered a boat out of New Bedford to see the lights in Buzzards Bay.