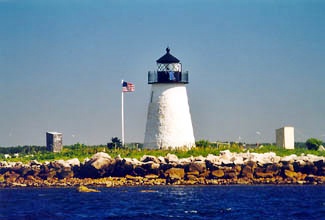 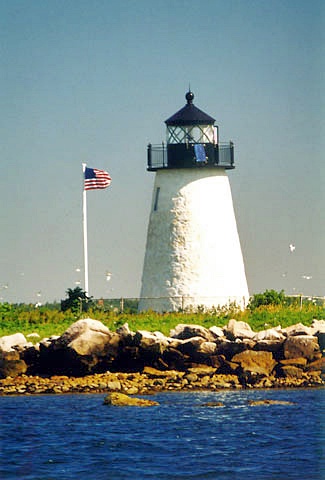 Bird Island, situated at the entrance to Sippican Harbor and near the head of Buzzards Bay, takes its name from the birds that have been nesting there for years. Now, it is the birds and ironically erosion that have contributed to the preservation of Bird Island Lighthouse. Federal grant money and an Army Corps of Engineers project to save the one-and-a-half-acre island  habitat for nearly one-third of North Americas endangered roseate terns  plus vigorous local fundraising and work by the Bird Island Lighthouse Preservation Society have made it all possible. According to Charles Bradley, founder of the Bird Island Lighthouse Preservation Society, Bird Island has one of the oldest original lighthouse structures. Other lighthouse sites may be older, but their structures have been replaced or rebuilt. Congress appropriated funds for the lighthouse in March 1819, and the resulting rubblestone tower, connected to a stone dwelling by a covered walkway, was activated later that year on September 1. Before repairs were completed in 1997, the 178-year-old lighthouse was crumbling, with loose mortar and broken glass, atop an unstable foundation. It was a mossy brown-green and blended into the horizon. Mariners complained they couldnt see it, said Bradley, who was also the local Harbor Master. After restoration efforts, the twenty-nine-foot-tall tower was a gleaming white, and the lantern room a contrasting black. Replacing the curved panes of the lantern room cost $12,000 alone.

On July 4, 1997, the new automatic light first pierced the darkness above Bird Island. Although the lighthouse was relit briefly in 1976, after restoration by the town of Marion and the Sippican Historical Society, for the majority of the prior sixty years it had been inactive. The light is now solar powered and flashes for 0.6 seconds every six seconds.

Theres a lot of history to the island, said Bradley, And a few legends. Most of the legends involve William S. Moore, a veteran of the War of 1812 and the first light keeper. A popular, but unsubstantiated story about Moore is that he was a convicted pirate who was banished to Bird Island. It is said that Moores wife, a fading beauty from Boston, had tuberculosis and a strong addiction to tobacco. Villagers who couldnt bear listening to her cries across the water are reported to have secretly smuggled bags of tobacco to her. One story claims Moore murdered his wife and hid her body somewhere on the island, after which he disappeared. Another version says that he caused his wifes death by refusing to take her to the mainland for medical treatment, fearing she would leave him now that his fortunes had declined from his swashbuckling years.

Although there is no sign of her grave on the island, it is believed she was interred there. One story is that after his wifes death Moore raised the distress flag. A minister walked across the ice to say a simple ceremony for her, then spent several back-breaking hours helping dig her grave. Moore is said to have blamed his wifes death on the villagers who provided her with tobacco.

The keeper appointed after Moore is reputed to have fled in terror just days after starting work, claiming hed seen a womans ghost. Ever since, the island has been called cursed and haunted, and reports of ghostly sightings abound.

Peter Murray, who became keeper of the light in 1891, might have believed the island was cursed. One especially severe winter, his eleven-month-old son was struck with pneumonia. Lacking the means to leave the island, Murray doused the tower light praying to attract attention. When help finally arrived, it was too late. The family buried the infant on the mainland never to return to Bird Island.

In his November 1, 1838 report, Naval Lieutenant Edward W. Carpender recommended that Bird Islands revolving white light composed of ten lamps and reflectors be converted into a fixed red light of just six lamps, without reflectors so as to permit the light of all the lamps to be seen from every point of the compass. Carpender also commented on the more than fifty buoys anchored in the immediate area, which though numerous were in his opinion necessary for the interests of commerce.

I.W.P. Lewis visited Bird Island in 1842 and noted that the light, contrary to Carpenders recommendation, was still a revolving one. At the behest of Lewis, John Clark, the second keeper of the light, provided the following comments on the station: The dwelling-house is tolerably comfortable, but requires new shingling and the chimneys smoke; the east and south side of the island are washing away fast. Last winter the stone wall on three sides was knocked away by the sea. I have been at work this summer rebuilding the wall on a more substantial scale. The superintendent allowed me forty dollars for the work There is a well here, but no water. I am therefore obliged to boat my water from the mainland, over two miles distant, and carry all our clothing ashore to be washed. Keeper Clark had been appointed in 1834 and earned an annual salary of $400.

Notable changes to the lighthouse include the installation of a fourth-order Fresnel lens in 1856 and a new lantern room in 1863. Extensive repairs and improvements were undertaken in 1867 and 1868, after the sea swept over the island in November 1866, filling the well and cellar, damaging the seawall, and carrying away part of the enclosure fence. Despite repairs to the seawall, a storm on September 8, 1869 of unprecedented severity swept the island and reduced the station from a condition of perfect order to that of a perfect wreck. Outbuildings were carried away, the stations barn moved, the boathouse tipped at an angle, and 280 feet of seawall destroyed. This storm prompted the construction of a stout five-foot-thick and seven-foot-tall seawall, three feet taller than its predecessor, to offer improved protection to the station.

By 1888, the keepers dwelling was in deplorable condition. Lighthouse Board records noted: If this dwelling is to be kept habitable it will be necessary to expend in its repair a sum that would amount to a considerable part of the cost of a new house. It would be better economy, better for the comfort of the keeper, and for the efficiency of the public service that a new dwelling be built at the earliest day practicable. It is estimated that such a building will cost $3,750. By 1890, the old stone keepers house was demolished and a frame, twenty-eight by thirty-one foot dwelling built on the existing foundation.

Necessity demanded the replacement of the old lantern room and deck in 1899; followed in 1902, by the building of a bell tower with a 1,000-pound fog-bell, struck by machinery.

Zimri T. (Toby) Robinson took over as keeper of Bird Island in 1895. Keeper Robinson stayed at Bird Island until his petition to move to Neds Point was granted in 1912. Uncle Toby, as Robinson was affectionately known, asked for the transfer from Bird Island because his advanced age made it difficult for him to row out to the island. When the transfer was put through, he also received a pay cut that reduced his salary by $50 to $500 per year.

Besides minding the light to help mariners, the keepers of Bird Island Lighthouse also ventured out in the bay to help mariners in distress. In September 1923, Keeper Maurice Babcock rescued a young man whose boat capsized near the lighthouse and also saved the boat. In March 1930, Keeper George Gustavus, the lights last keeper, towed a motorboat to the safety of Marion Harbor after it became disabled off Bird Island.

By the time the hurricane of 1938 raged across New England, Bird Island Lighthouse had already been decommissioned, its function having been replaced in 1933 by lighted buoys. The powerful storm surge accompanying the hurricane destroyed all structures on the island except for the lighthouse, which was the oldest of them all.

In 1940, the government offered Bird Island Lighthouse Reservation at auction, and on February 16, the highest of the seven bids received for the property was a $654 bid submitted by George Harmon of Bar Harbor, Maine. A month later, Augustus Fiske purchased the island. Later, in 1966, the town of Marion bought the island for $2,500 from his heirs. The town of Marion retains ownership of its beloved Bird Island Lighthouse, but as history has shown, continual attention will be required to save it from storms and deterioration.

Located on Bird Island, located about a half mile off the eastern tip of Sippican Neck not far from Marion.
Latitude: 41.6693, Longitude: -70.71731

For a larger map of Bird Island Lighthouse, click the lighthouse in the above map.

The lighthouse is best viewed from a boat, however distant views are possible from land. From Route 6 northeast of Marion, turn south on Point Road. Follow Point Road to the Kitanset Golf Club at its end from where views of the light are possible. The island is off-limit during the tern nesting season from mid-May until mid-August.

The lighthouse is owned by the Town of Marion. Tower closed.