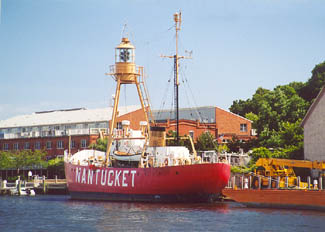 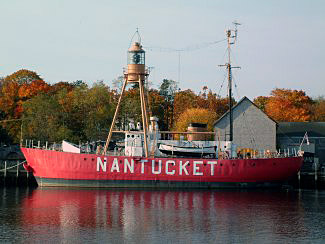 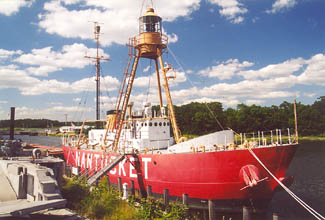 The keel for WLV-613, the last lightship built in the United States, was laid on February 4, 1952 at the U.S. Coast Guard yard in Curtis Bay, Maryland, and six months to the day later, the vessel was formally launched. Following successful sea trials, the lightship was commissioned in September of that year and sailed to its first assignment at Ambrose Station, marking the entrance to New York Harbor.

After just a year of service, WLV-613 underwent a transformation that made it unique amongst U.S. lightships: it received a tripod foremast topped by a cylindrical, lighthouse-style lantern room housing a new multi-catoptric biform optical apparatus, manufactured by Chance Brothers Ltd. of Birmingham, England. Capable of producing a light with an intensity varying from 250,000 to 5 million candlepower in three steps, the beacon made WLV-613 the brightest of all American lightships.

On June 24, 1960, Relief Lightship LV 78 was temporarily anchored at Ambrose Station while WLV-613s engines were being overhauled at Coast Guard Base St. George on Staten Island. Early that morning, the Green Bay was outbound from Port Newark, New Jersey loaded with 8,100 tons of general cargo. Shortly after the pilot, who had navigated the vessel out of the harbor in a very dense fog, boarded the pilot boat to return to port, the Green Bay captain steered his vessel towards the lightship, which according to radar was estimated to be about a mile distant.

While desperately trying to locate the Green Bay which had disappeared into the fog, the men in the life raft were nearly run over by the ocean liner Queen Elizabeth, whose crew failed to notice the men or hear their hand whistles. After over an hour on the water, the men aboard the life raft were finally located by a motor lifeboat launched by the Green Bay. A patrol boat took the men to the Coast Guard base on Staten Island, and later that afternoon, WLV-613, unable to travel under her own power, was towed out to Ambrose Station to relieve a Coast Guard cutter that had been substituting as a lightship.

WLV-613 served at Ambrose Station until 1967, when a Texas-style tower, prefabricated in Norfolk, Virginia at a cost of approximately $2.4 million, was used to mark the station. On August 23, 1967, WLV-613 circled the new tower three times, and then left the station for the last time.

For the next twelve years, WLV-613 served as a Relief Lightship in Massachusetts before being designated Nantucket II in 1979 and assigned to serve alternating three-week assignments at Nantucket Shoals Station with its sister ship WLV-612 (Nantucket I). These two lightships were the youngest lightships in the United States, and Nantucket Shoals Station was the countrys final active lightship station. At 2:30 a.m. on December 20, 1983, WLV-613 relieved WLV-612 and at 8 a.m. that same day, a large navigational buoy officially relieved WLV-613, making it the last lightship to be in service in the United States. After its service as a lightship, WLV-613 participated in various law enforcement, security, and public relations missions until it was decommissioned and donated to New England Historic Seaport in 1984 for use as a floating museum in Boston.

The non-profit New England Historic Seaport cared for the lightship until 1996 when the organization was amalgamated into another non-profit group, Schools for Children, which had no interest in maintaining the lightship. Instead, the vessel was offered for sale through National Ship Liquidators for $110,000 and probably would have had its identity as a lightship compromised if a group of concerned individuals hadnt stepped in to purchase the lightship.

In 1998, WLV-613 was being cared for by Friends of the Lightship, a volunteer group with lots of spirit but little money, at Marina Bay in Quincy, when Jack Baker discovered the lightship. With no funds available for repairs, the vessel was likely going to be scrapped, so Baker stepped in and purchased the lightship. Baker originally thought he could get a group of volunteers to help refurbish the lightship, but when this plan didnt work out, he personally funded a million-dollar-plus overhaul of the historic vessel.

The lightship was outfitted with a new keel, new plumbing and electrical work, tiled bathrooms, cabinetry, and cranberry carpeting. While the galley retains its gleaming stainless steel workspace and stove, the convenience of a modern refrigerator and a microwave was added. The engines and mushroom and Danforth anchors were all cleaned and painted to make the vessel seaworthy once more.

In September 1999, WLV-613 sailed to New Bedford, under command of Norman Lemoine, to be on hand for the dedication of a memorial to those who lost their lives aboard lightships. The centerpiece of the memorial is a bell recovered in 1963 from Vineyard Sound Lightship, which sank in the 1944 Great Atlantic Hurricane. As part of the dedication activities, the public was allowed to tour WLV-613 and a modern Coast Guard cutter.

WLV-613 was placed on the market for $1.6 million in 2002, but did not change hands until William Golden acquired the vessel in 2014. Golden purchased WLV-612, WLV-613s sister ship, in 2000 and transformed it into a luxury vessel that is available for charters and events. On December 1, 2014, two tug boats towed WLV-613 from its berth in Wareham to New Bedford, where the lightship will be restored to its former glory. WLV-613 is in much better shape than its sister ship was in when Golden acquired it, so the lightships restoration was expected to only last a few months.

Golden plans to use WLV-613 as a floating restaurant and museum in New York City, which he hopes will generate a sufficient revenue stream to maintain the vessel. There are only fourteen other U.S. lightships remaining that Golden doesnt own, but he claims he is going to stop at two. I think my marriage would be in severe jeopardy if I were to even think about acquiring another lightship, Golden said.

The lightship was docked for several years at the mouth of Agawam River in Wareham, but it has been sold, and its current location is not known.
Latitude: 41.75502, Longitude: -70.71081

For a larger map of Lightship Nantucket II WLV 613 Lighthouse, click the lighthouse in the above map.

The lightship was sold in 2014. It was being restored in New Bedford, but its current location is unknown.