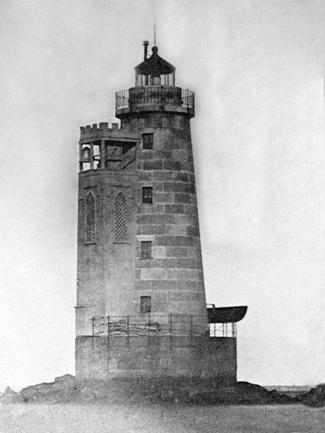 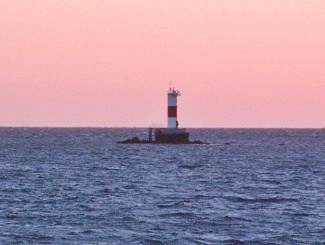 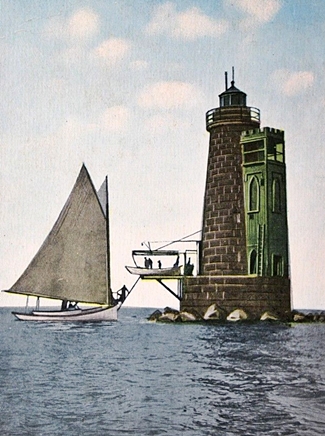 Bishop and Clerks Lighthouse, built directly on Bishop and Clerks Shoal offshore from Hyannis Harbor, Massachusetts, began as a replacement for both a lightship and the Point Gammon Lighthouse and bears the distinction of having been kept by three members of the same family.

In January 1856, a twenty-six-foot, schooner-rigged lightship was stationed in 4.5 fathoms of water near The Bishop and his Clerks, a navigational hazard in Nantucket Sound made up of one large rock and several smaller ones. Eight lamps and reflectors were displayed from the lightships mast to warn mariners of the obstruction that since 1851 had been marked with a spindle daymark.

Lightship duty was beyond a doubt the most hazardous in the Lighthouse Service, because no matter how severe the storm, the vessel was required to maintain its position. When possible, the Lighthouse Board favored the use of lighthouses over lightships, as they were less expensive to staff and maintain. The 1856 Report of the Secretary of the Treasury noted, The erection of the light-house authorized to be placed on the Bishop and Clerks, and the transfer of the light-vessel now stationed near that ledge to the Handkerchief shoal, will render the passage of the Vineyard sound (the great thoroughfare of the coasting trade) comparatively safe and easy for the careful navigator. Congress approved $20,000 for the new lighthouse on August 18, 1856.

Work on the wave-swept Bishop and Clerks Lighthouse, located roughly two-and-a-half miles south of Point Gammon, began in the spring of 1857. When completed, the light grey, granite structure, with a wooden appendage to house the fog bell and its striking mechanism, towered sixty-five feet above the rocky shoal and surrounding water, unlike many lighthouses that were complimented by gardens and outbuildings. Point Gammon Lighthouse on the Yarmouth shore was decommissioned when the fourth-order Fresnel lens in the lantern room of Bishop and Clerks Lighthouse was activated on October 1, 1858.

The lighthouse was outfitted with a kitchen and two bedrooms for the keepers who attended the light. Keepers would typically spend twenty days on the light, and then have ten days of shore leave. Two keepers initially shared responsibility for the light until the position of second assistant keeper was added in 1867.

Locals on Cape Cod were keen to say that the Peak family had saltwater in their veins, and the number of deep sea captains and lighthouse keepers amongst them lent proof to their words. John Peak replaced his father as keeper of Point Gammon Lighthouse, served there from 1824 until it was discontinued in 1858, and then became the first keeper at Bishop and Clerks. John and his wife Nancy had nine children while at Point Gammon, two of whom would also enter the Lighthouse Service and be assigned to Bishop and Clerks.

In 1869, Lighthouse Board records noted that extensive repairs had been carried out at the station along with the following change to the fog signal: Stevens striking apparatus has been substituted for the old fog-bell machinery, removed to the buoy station at Woods Hole, whence it is to be sent to the light-house depot, Staten Island.

Over the years, the action of the sea exposed the timber foundation beneath the granite base and tower at Bishop and Clerks, requiring it be covered by concrete masonry. In 1889, 150 tons of riprap stones were placed around the tower to protect its foundation, and a red sector was inserted in the lantern room to cover Cross Rip and Tuckernuck Shoals.

The base of the tower was again repaired in 1898, and a cistern was added to the cellar. The following year, a new revolving machine was installed for the lens, and a room in the old bell tower was lined with galvanized iron and fitted up as an oil room.

Despite the care to ensure maritime safety, foul weather and dangerous currents continued to claim vessels, such as the three-masted schooner, Ella and Jenny, loaded with guano that crashed into the shoals during a fierce snowstorm in December 1904.

Standing just four feet nine inches tall, Charles Hinckley was known as the shortest keeper in the Lighthouse Service, but he, by far, had the longest tenure at Bishop and Clerks, serving from 1881-1884 as an assistant and then from 1892 until 1919 as the head keeper. In 1909, Keeper Hinckley was quoted in the magazine Along the Coast as saying, There aint a great deal of me so far as height goes but I am all right from my feet up. Ive laid many a man bigger than me on his back if I do say it myself. On March 17, 1923, Bishop and Clerks was changed to an unattended acetylene light, displacing three keepers and providing an annual savings of $3,904. The stations fog bell and red sector were discontinued at this time.

In 1928, Bishop and Clerks days as an active lighthouse drew to an end. The automated light was discontinued, and the darkened tower began its life as a daymark. After being damaged by a severe storm in 1935, Bishop and Clerks Lighthouse was listing and near collapse by 1952. Rather than make costly repairs, the Coast Guard decided to demolish the structure.

The following account of the demolition of the lighthouse was published on September 11, 1952, just hours after the tower fell:

The 94-year-old Bishop and Clerks Lighthouse, long a familiar landmark to mariners and vacationers, vanished in a thunderous blast of dynamite at 12:57 p. m. today. The 68-foot tower, unused as a beacon since a storm damaged it in 1938, was demolished under direction of the Coast Guard, which had judged it unsafe. Scores of pleasure craft bobbed and circled at a safe distance as Summer folk sadly watched the lights destruction which they had protested in vain.

Workmen had labored, since sunup this morning, placing dynamite sticks in 68 holes bored in the granite base of the tower. At three minutes before 1, John Parmenter of Brockton set off the charge from a dory 1000 feet away. A cloud of smoke partly hid the old tower, which stood swaying for a moment and then toppled to one side like a pile of childs blocks.

All that remained above the base was a heap of rubble that still held in place a two-foot slab of granite, imprinted with the date 1858, which had stood over the door of the lighthouse. The tower stood on a ledge, exposed at low tide, off Point Gammon, five miles at sea from this town. A 30-foot day beacon is to be built on the base.

U. O. MacDonald of Boston, drilling and blasting specialist, handled the demolition. It was a difficult job, he said, because he had to preserve the base of the tower, and because the debris had to be made to fall on the ledge, so that it could be salvaged for future use. MacDonald had little bags of sand placed under each dynamite stick to direct the blast upward. A week of preparations had been made by the McKie Lighter, Company of Boston, hired by the government for, the job. Everything worked out exactly as planned. Warren E. Moore, an inspector for the Coast Guard, was there in a supervisory capacity.

The tug Irene and Mary, on the scene, flew a red warning dynamite flag. A government craft kept sightseers at a safe distance. When they were ready to blast, the tug blew six warning blasts on her whistle. Ten seconds later the explosion came. The historic Bishop and Clerks Lighthouse was no more.

The hidden rocks at Bishop and Clerks still pose a threat to navigation and today are marked by a white cylindrical tower, with a red band, that at night produces a white flash every six seconds.

For a larger map of Bishop and Clerks Lighthouse, click the lighthouse in the above map.

This light is best seen from a boat. It is visible from the Nantucket-Hyannis ferries.

Find the closest hotels to Bishop and Clerks Lighthouse