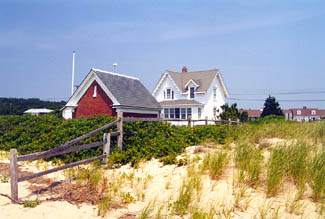 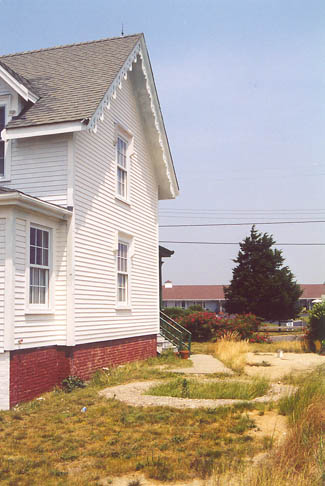 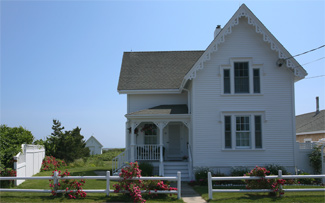 To visit Mayos Beach Light Station, first you must travel to Cape Cod in Massachusetts and go a little past Wellfleet Marina in Wellfleet Harbor to Mayos Beach, where you will find the privately owned, immaculately kept former keepers house and oil house nestled picturesquely amongst pink and white beach roses. Adjacent to the dwelling is a foundation ring that indicates where a lighthouse used to stand, but to see this tower you will need to travel approximately 3,000 miles west to Point Montara, California, near San Francisco, where the lighthouse was transplanted in 1928. It was widely believed that the iron Mayos Beach tower had been razed in 1938. However, in 2008 lighthouse enthusiast Colleen MacNeney found a photograph of it at the U.S. Coast Guard Historians office in Washington D.C. in a file for Point Montara Lighthouse. The picture was dated 1928 and had written on it: This tower formerly used at Mayo Beach, 2d District. While some heralded the discovery as a journalistic scoop, others on the West Coast, such as historian and lighthouse book author Ralph Shanks, did not view the news as a revelation. It was no big surprise to me, Shanks said. Id heard of this 20 years ago.

Prior to the American Revolution, Wellfleet had been a major whaling port, but its importance declined after the British blockaded Cape Cod ports during the war. Some local men died on prison ships, and other families moved away. By 1835, the town had begun to recover, and Wellfleets Commercial Wharf was built. Local vessels shifted their focus in the mid-nineteenth century from whales to mackerel fishing, and related onshore businesses began to flourish. After the railroad arrived in 1870, the harbors oysters took precedence, and they were shipped throughout New England. Thought to be named for the Wellfleet oyster beds near the River Crotch in Essex England, Wellfleet Harbor is a lovely sheltered harbor

In 1822, a lighthouse was built on Billingsgate Island to guide vessels into Wellfleet Harbor, but some felt another beacon was needed on Mayos Beach at the head of Wellfleet Bay, a few miles to the north, to direct mariners to the wharf. Congress appropriated $1,000 in 1837 and another $2,000 the following year for construction of Mayos Beach Lighthouse, but when Lieutenant Edward Carpender visited the area while the lighthouse was under construction, he saw little need for the light and tried to have the work stopped. Some venerable old fishermen and pilots belonging to the place, whom I also consulted, declared their opinion openly and publicly against the light, Carpender noted, and elsewhere on the cape, when this light was mentioned, it raised a smile. Carpender recommended that if the government completed the light, it should operate as a tide-light with a single lamp exhibited from one hour before high tide to one hour after to guide vessels over the flats.

Carpenders recommendation was ignored, and instead, ten oil lamps backed by reflectors were employed in an octagonal lantern room. Joseph Holbrook provided the following description of conditions at the lighthouse in 1842:

I was appointed keeper of this light on its first being established, in the year 1838, upon a salary of $350. The lighthouse is a brick building of four rooms, with the lantern erected upon the ridge or roof thereof, which is of wood. The walls of the house are set two feet below the natural surface of the beach, without any other foundation. In consequence of this, the cellar was flooded with water continually; in fact, the tide ebbed and flowed regularly in the cellar. The oil butts were placed in the cellar; and during a very high tide, in attempting to move them and save the oil, I received a serious injury by the falling of one of these butts (containing 93 gallons) upon me. The very wretched manner in which the house was built renders it almost uninhabitable; the walls always and the roof continually leaky. In consequence of this, and being compelled to use the water caught from the roof, which constitutes my only resource, two of my children have died, as I solemnly protest, entirely on account of the unhealthy condition of the house, and form using the stagnant water of the cistern. When it blows hard, the lantern on the roof rattles and shakes so as to require my constant attendance to keep the light from being shaken out, breaking the tube glasses and spilling the oil. The whole weight of the lantern and its rise above the roof cause numerous leaks therein, by the manner in which it is shaken by the wind. Last summer an oil vault was built in the cellar, under the direction of James Baldwin, Esq., engineer, where the oil is now perfectly secured. There were originally nine lamps in this lantern, but three of them were removed some time since, and six are now used. The reflectors and lamps are both bad, and yield but a poor light. I consider this light-house to have been erected in a very shameful manner, and such as not honest man would have done. There are 103 vessels belonging to the port of Wellfleet, averaging 50 tons each, and they are mostly engaged in bounty fishing. This is a tide harbor, and in very severe winter is frozen. There have been three wrecks here since I took charge of this light  one of them the brig Diligence, of 270 tons.

In 1839, seven hundred sail passed here within my view. There is no well of water here of any kind, nor am I allowed any boat.

> In 1843, Fifth Auditor Stephen Pleasonton, noting that the light was useful to a few fishermen only, who could very well enter the port without it, ordered that the number of lamps be reduced to three.

Besides a few minor repairs, no significant improvements were made either to the dwelling or tower for many years until 1856, when a sixth-order Fresnel lens replaced the old oil lamps and reflectors.

When William Newcomb Atwood took charge of the light on April 1, 1865 as the stations sixth keeper, he received the same $350 annual salary as the first keeper. A Wellfleet native, Atwood went to sea as a boy. In the nineteenth century, it was common for boys as young as twelve years old to go to sea, frequently as a cook. After Atwood lost his arm during the Civil War at the Battle of Fredericksburg, he returned home and married Sarah Cleverly in 1863. No longer able to work aboard ships, he was given the post of keeper at Mayos Beach as compensation for his patriotic sacrifice. In 1876, his annual salary was increased to $500.

Upon Williams death, his widow, Sarah, with four small children to feed, applied for and was temporarily appointed the stations first female keeper on July 8, 1876. By August 26 that year, the job became permanent. Her appointment was likely influenced by the fact that tending Mayos Beach Light did not require going outside in foul weather.

By 1878, it was clear that the house and tower required replacement, and $8,000 was allocated for construction of a new dwelling and a detached cast-iron tower with an internal wooden spiral staircase. The six-room dwelling and tower were completed in 1880, at a nearby location, and a bulkhead was constructed around them for protection from the sea. The lantern exhibited a fixed white light that could be seen six miles away. Over the years, the tower would sport a variety of paint colors. A screen was built around the light to protect it from birds that crashed into the lantern with enough force to break the glass.

Despite the hardships of living at Mayos Beach, Sarah Atwood supported her family there for twenty-six years, until she resigned on May 7, 1891 and moved to East Commercial Street. At that point, James Smith assumed the role of keeper. In 1907, a brick oil house was added to store the volatile kerosene then used in the lantern.

The government finally accepted the argument that Mayos Beach Light was not necessary and decommissioned it on March 10, 1922. The government sold the property, along with the dwelling and oil house, to Captain Harry Capron at auction in 1923.

Many assumed that the tower was simply torn down when the station was sold, however, the Lighthouse Service, known for its frugal ways, simply unbolted the sections of the thirty-foot tall, cast-iron tower and sent it west, presumably aboard a seagoing buoy tender. It arrived at Yerba Buena Station in San Francisco Bay in 1925. From there, in 1928, it was sent to Point Montara, which was in need of a new tower as the one erected in 1912 had seriously disintegrated by action of salt spray.

When Wayne Wheeler, former president of the United States Lighthouse Society, was asked why no one seemed aware of the shipment of the Mayos Beach tower to the West Coast, he replied, Nobody asked.

For a larger map of Mayo's Beach Lighthouse, click the lighthouse in the above map.

From Route 6 east of Wellfleet, turn west of Main Street and drive 0.3 miles before turning left onto Commercial Street. Follow Commercial Street until it ends at the marina, and then turn right onto Kendrick Avenue. The keeper's house will be on your left at the end of the beach parking area.