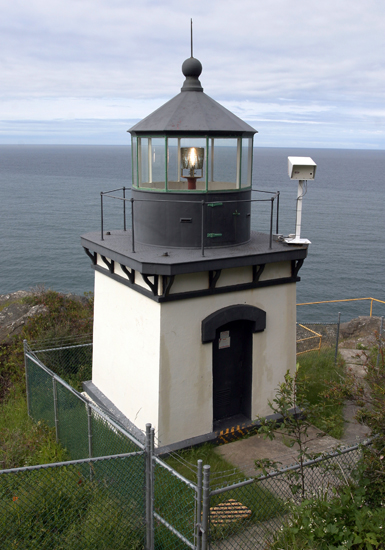 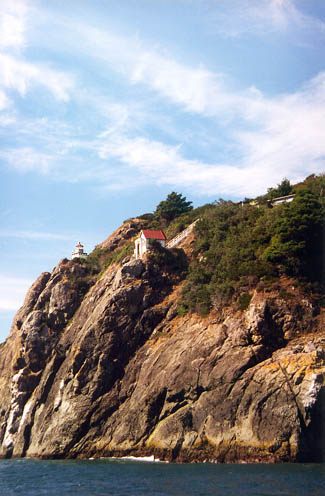 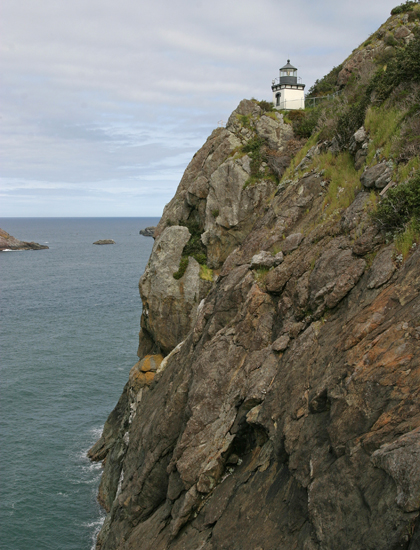 Trinidad Head, a large domed prominence rising to a height of 380 feet, is connected to the mainland only on its northern end, thus forming the beautiful and natural Trinidad Bay on its eastern side. On the bluffs overlooking the bay, Trinidad, the oldest town on the northern California coast, was founded on April 8, 1850. Early on, the town was a vital link between ships anchored in the bay and miners testing their luck in the Klamath, Trinity, Salmon River, and Gold Bluff Mines. As the gold rush slowed, Trinidad Bay, like most bays along the Redwood Coast, became home to multiple sawmills. To aid vessels engaged in the lumber trade, a lighthouse was proposed for the ocean-facing side of the headland in 1854. An appropriation for the lighthouse was made in June 1860 and forty-two acres on the southern portion of the headland were purchased in 1866, but work on the project did not begin until the spring of 1871. First, a road was carved into the eastern side of the head, and then work began on Trinidad Head Lighthouse, which would stand at the top of a 175-foot cliff. Given the loftiness of its perch, a squat brick tower was deemed adequate. The tower and associated keepers dwelling, located roughly fifty yards from the tower, were finished over the course of the summer and fall, and on December 1, 1871, Keeper Jeremiah Kiler activated the revolving fourth-order Fresnel lens for the first time. The light had a focal plane of 198 feet above the ocean, and its characteristic was fixed white, punctuated every minute by a red flash.

Keeper Kiler faithfully stood watch over the light for a lengthy tenure of seventeen years before he passed away in 1888, but amazingly his successor, Fred L. Harrington would top this by remaining at the station for twenty-eight years before retiring in 1916 and being replaced by Edward Wiborg. Harrington oversaw the installation in 1898 of a fog bell atop a rock outcropping, roughly fifty feet below the level of the light. Suspended from a concrete gallows, the 4,000-pound bell was struck at prescribed intervals by a heavy hammer. A clockwork mechanism was housed in a frame bell house just east of the bell, and weights descended down the face of the cliff to power the apparatus. As the keeper had to wind the machinery every two hours, the single-family dwelling was expanded into a double-dwelling to house the additional keeper assigned to share the increased workload at the station.

The fog bell, which was manufactured in San Francisco by White & Deronn, worked fine for a couple of years until the weight cable snapped, sending the weights plummeting down the face of the cliff and into the ocean. To prevent the loss of additional weights, a wooden weight tower was constructed on a concrete foundation next to the gallows and bell house. As the tower was much shorter than the height of the cliff, the keepers most likely got a lot more exercise running up and down the forty-eight steps and sloping boardwalk that led from the dwelling to the fog bell.

The sum of $250 was appropriated in 1899 for a telephone line to connect the lighthouse to Trinidad, and the Sunset Telephone Company was contracted to erect the redwood poles and string the wire. After roughly a year of use, the Lighthouse Board discontinued the telephone service, as the Sunset Company charged an annual rental fee of $60 for the use of its equipment and the phone had proved to be of no use to the Light-House Establishment.

The most notorious event connected to the lighthouse was a huge wave that struck the headland in 1914. Keeper Harrington recorded the following account of the incident in the station log:

The storm commenced on December 28, 1914, blowing a gale that night. The gale continued for a whole week and was accompanied by a very heavy sea from the southwest. On the 30th and 31st, the sea increased and at 3 p.m. on the 31st seemed to have reached its height, when it washed a number of times over [93-foot-high] Pilot Rock, a half mile south of the head.

At 4:40 p.m., I was in the tower and had just set the lens in operation and turned to wipe the lantern room windows when I observed a sea of unusual height, then about 200 yards distant, approaching. I watched it as it came in. When it struck the bluff, the jar was very heavy, and the sea shot up to the face of the bluff and over it, until the solid sea seemed to me to be on a level with where I stood in the lantern. Then it commenced to recede and the spray went 25 feet or more higher. The sea itself fell over onto the top of the bluff and struck the tower on about a level with the balcony, making a terrible jar. The whole point between the tower and the bluff was buried in water. The lens immediately stopped revolving and the tower was shivering from the impact for several seconds.

Whether the lens was thrown off level by the jar on the bluff, or the sea striking the tower, I could not say. Either one would have been enough. However, I had it leveled and running in half an hour. About an hour later another sea threw spray up on the level of the bluff, and the constant jars of the heavy sea was much over normal during the night and the whole of the next day. On the 3rd, the sea moderated to some extent, but a strong southeast wind and high sea continued until the 5th. During the 26 years that I have been stationed here, there has at no time been a sea of any such size as that of the 31st experienced here; but once during that time have I know the spray to come onto the bluff in front of the tower, and but twice have I seen sea or spray go over Pilot Rock.

Although Harrington had the lens leveled and running in just thirty minutes, who knows how long it took for him to recover from that experience. Trinidad Bay was home to a whaling station in the early 1920s, and the keepers often served as a lookout for the faint white puffs, indicating the presence of gray whales migrating along the coast. As many as twenty-nine whales a week were hauled ashore in the bay for processing, which produced an offensive odor. Most Trinidad residents were relieved when the whaling operations ended in 1929.

Electricity came to the station in 1942. As a result, in 1947 the fog bell was replaced by compressed air horns, and the lens was removed in favor of a modern beacon. Two years later, a replica of the tower called the Trinidad Memorial Lighthouse was built in town on a bluff overlooking the bay, and the original lens was placed in the lantern room. The original fog bell, suspended from a wooden structure, is on display next to the memorial lighthouse.

Water for the use of the stations occupants was captured on the roof of the keepers dwelling and then fed into underground cisterns and a large wooden tank. In 1907, each of the two cisterns had a capacity of 7,000-gallons, and the wooden tank, which rested on a concrete foundation, could store 9,500 gallons. The station would run out of water in dry years, forcing the keepers to haul in water by wagon. After the Coast Guard took control of the station in 1939, buoy tenders would periodically call at Trinidad Head and pump water up to the station using long hoses. A water pipe was run between the station and the town of Trinidad in 1960, and the station finally had a virtually unlimited water supply.

The original keepers dwelling was razed in the late 1960s, and the Coast Guard built a triplex to house its personnel. The station was automated in 1974, but Coast Guard personnel continued to live in the housing until sometime after 2000. Trinidad Head Lighthouse is still active, with a drum-type Fresnel lens in the tower and a backup modern beacon mounted outside the lantern room. A pair of fog signals are stacked next to the fog bell house, which is the only remaining bell house in California.

A ceremony with docent-guided tours was held at the lighthouse on May 16, 2014 to celebrate the transfer of the property from the Coast Guard to the Bureau of Land Management, who plans on holding open-houses at the lighthouse in the future.

For a larger map of Trinidad Head Lighthouse, click the lighthouse in the above map.

The original lighthouse is located on the headland, the base of which can be reached by continuing west on Edwards Street. You can hike up a road that leads to the southern end of Trinidad Head where the Coast Guard was located. From the gate to the Coast Guard station, continue right on the road that leads uphill. Before reaching the summit, you will see a cross that commemorates one erected there in 1775 by Bruno de Hezeta. Just beyond the cross is a small viewing platform, from which a glimpse of the lighthouse's lantern room is possible. The viewing platform was financed and constructed in 2002 by Trinidad residents Don Blue and Tom Odom for the benefit of determined lighthouse enthusiasts. You can continue on the trail north around the head or return the way you came. There is a helpful map near the beginning of the climb.

The lighthouse is open to visitors between 10 a.m. and noon on the first Saturday of each month.

The lighthouse is owned by the Bureau of Land Management. Grounds/dwelling/tower closed.


It seems there are a couple of events where everyone remembers where they were and what they were doing when they occurred. There was the O.J. Simpson white Bronco chase, at least for us in California, and then there were the more recent tragic events of September 11, 2001. We happened to be near Trinidad Head when we heard the news that Princess Diana was involved in a fatal car accident.