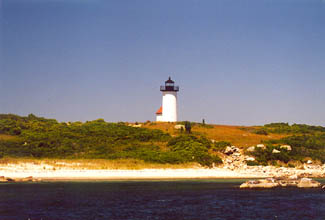 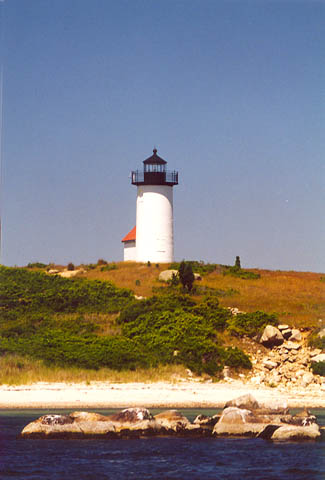 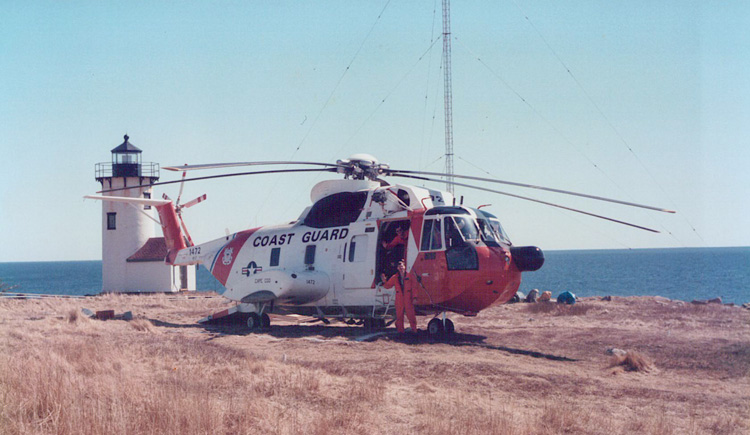 The peaceful, pastoral landscape of Naushon Island, in Vineyard Sound, Massachusetts, with its gentle anchorages and stretches of sandy beaches, belies the danger hidden offshore in the deep, blue water where treacherous currents can drag vessels sideways onto unseen shoals. During the eighteenth century, Vineyard Sound, with its sly currents, blankets of fog, and unpredictably severe weather, was considered the second busiest shipping passage in the world, next to the English Channel, and one of the most dangerous.

Seven-mile-long Naushon Island is the largest of the sixteen Elizabeth Islands, which were discovered by the seventeenth-century English explorer Bartholomew Gosnold and reputedly named for his little girl. Livestock would later be brought to graze on Naushons bucolic fields, and there were about 2,000 resident sheep on the island in the early nineteenth century.

On the eastern side of the island, Tarpaulin Cove provided a haven for farmers doing brisk business with the crews of sojourning ships. It was there that the ambitious Zaccheus Lumbert established a tavern to provide sustenance and a place to rest for mariners.

Recognizing that his livelihood was inextricably linked with the seafarers and seeking to protect his income and/or to do a good deed, Lumbert, a former Nantucket resident, privately established a light in 1759, kept burning with Nantucket Oyle out of their own courtesy.

In 1762, Lumbert sent a letter to Governor Francis Bernard requesting financial support for the light: Zaccheus Lumbert  Innholder [showeth] that he hath for the public good of Whalemen and Coasters built a Lighthouse at said Cove  [which] has been the means of saving many vessels from being lost ..., he hopes that your Excellency will make him an allowance  that he may be excused from paying any Duty of Excision on the liquors he sells. A grateful governor responded with the order that Lumbert be paid six pounds.

Lumbert kept the light burning until he sold the tavern in 1764, and it seems that subsequent tavern keepers carried on the work until 1817.

Although the appropriation for a formal lighthouse at Tarpaulin Cove was made in 1807, it was not until 1817 that the federal government spent $216 for a lighthouse site on the southwest side of the cove and construction began on a rubblestone tower costing $6,062.11. This delay resulted from an oppositional letter writing campaign organized by James Bowdoin, a proprietor on the island, and directed to Albert Gallatin, Secretary of the Treasury, and others. Bowdoin proposed that the public interest may be benefited by employing my tenant as keeper of the light house & in that case much expense and trouble might be saved to the public. He effectively delayed action on Tarpaulin Cove Lighthouse until after his death.

Some reports describe the government-built tower as being thirty-eight feet tall, but Lighthouse Board records list it at twenty-five feet. John Hayden, the first keeper, was there when the new tower debuted its fixed white light in October 1817.

Hayden, who remained at the light for thirty-five years, provided the following grim statement about the miserable conditions at Tarpaulin Cove in 1842 for engineer I.W.P. Lewis inspection report.

The light-house and dwelling are both built of rough stone, laid in lime mortar. The roof of the house and a shed attached are both of wood. The tower is leaky from top to bottom, so that I have to cut the ice off the staircase in winter. All the staircase and window frames are more or less rottenthe landing of the stairs dangerous to tread upon. The lantern sweats so as to make quantities of ice on the glass and floor. The tower is not high enough to clear the land to the westward, so that the light in that direction is of no use to vessels near the shore. The dwelling-house leaks badly about the windows, the frames of which are rotten; cellar stairs rotten, and ridge boards of the roof old and rotten. The house has been rough-cast outside, but this peals [sic] off and is of no use. The collector has ordered shutters to three windows of the house to keep off the rain. There is a boat-house and landing; the landing is a kind of trestle bridge made of rough poles, and is nearly knocked to pieces in the surf.

I have a well, thirty-six feet deep, without a drop of water in it; also a cistern, the pump of which always freezes up in winter, for want of covering.

I consider the establishment was not faithfully built in the first instance. The plastering is more or less fallen off in the chambers and sides of the other rooms; chimneys are all smoky, and the house cold and uncomfortable.

After two more years of living with a dry well, funds were finally provided to dig a new one. The lighthouse logbook shows that Francis Burt and William Cummings took thirty-five days at $1.50 a day to dig the well, and Tristram Cleveland took twenty-four days at $1.50 to build the well.

An inspector in 1850 noted: Keeper is a hard-working, likely man, and has brought up a large family. Keeper Hayden and his wife Lucretia had at least six children.

In 1856, during Nathan Cliffords term as keeper, a fifth-order Fresnel lens was purchased from Sautter and Company of Paris, for 2604.5 francs, and installed in the tower in place of nine lamps set in fifteen-inch reflectors. Due to the number of fixed white lights in the area, a new lens was installed in the tower in 1870, and on April 7 of that year, the characteristic of the light was changed from fixed white to fixed white punctuated every thirty seconds by a bright flash.

In 1871, Keeper Richard Norton obtained his position after the Confederate raider Alabama sank the square-rigger he captained and partially owned. The lighthouse job was given as partial compensation for his loss. Also that year, the tower and house received a coat of white paint.

At last in 1888, something was done about the dilapidated, leaky stone house built in 1817. After demolition of the stone dwelling, a 25 x 26, two-story house with an ell and a basement was built on the old foundation for $3,000. In 1890, the Lighthouse Board noted: This tower, built in 1817 of rubble stone masonry, and covered in 1861-65 with a pyramidal shingled structure, is in bad condition and should be replaced with a new one. A fog-bell to be struck by machinery was established, and a framed and shingled bell-tower, 16 feet square and 30 feet high, was erected. The 1,200-pound bell was placed in operation on November 28, 1890 and was struck a single blow every fifteen seconds as needed.

A temporary structure was built on the island in 1891, and the stations light was displayed from it from April 25 to June 30, while a new lighthouse was built. This twenty-eight-foot-tall, cylindrical, brick tower was equipped with iron stairs, an iron deck, and a fourth-order lantern room, and was built on the foundation of its predecessor. An oil house was added to the station in 1903.

Frank Davis was serving as keeper at Tarpaulin Cove on October 31, 1924 when an explosion occurred on the schooner Tanzy Bitters causing a fired that burned the vessel down to the waters edge. Keeper Davis rescued two badly burned men and brought them to his kitchen, where his wife Olive tried to care from them while he hurried to Woods Hole to fetch the doctor. Although the men died, the doctor said he couldnt have done more than Olive had. While her husband was away, Olive Davis also tended the light.

Roughly a year earlier, Keeper Davis launched his boat and went to the assistance of the crew of a whaleboat from the Coast Guard Cutter Acushnet when they were drifting out into the sound and were unable to row to windward.

The thirty-foot-tall fog bell tower at Tarpaulin Cove was destroyed in the great New England hurricane of September 21, 1938, and was not rebuilt.

Tolman Spencer, who had been keeper since 1928, resigned his position on September 4, 1941, when the light was automated and taken over by the Woods Hole Coast Guard. By 1958, the light was considered less important, and its candlepower was reduced from 7,500 to 700. The house and other structures deteriorated and were torn down in 1962. Today, a modern optic sends out a flashing white light every six seconds from the towers lantern room.

In August 2001, a three-year effort by the Cuttyhunk Historical Society and the Naushon Trust to become caretakers of Tarpaulin Cove Lighthouse won a twenty-five-year license for the tower from the Coast Guard.

As Naushon Island is maintained in its rugged, natural state on a second ninety-nine-year lease from the government to the Forbes family of Boston, the public is not allowed to land on the island, and since no public cruises pass close to Tarpaulin Cove, viewing the lighthouse is difficult.

Located on the eastern side of Naushon Island, a privately owned island that lies between Buzzards Bay and Vineyard Sound.
Latitude: 41.46879, Longitude: -70.75748

For a larger map of Tarpaulin Cove Lighthouse, click the lighthouse in the above map.

Access to the island is restricted. We took a private boat tour out of New Bedford to view this light. An annual one-day open house, sponsored by Cuttyhunk Historical Society, is held at the lighthouse typically during the first week or two of August.

The lighthouse is owned by the Coast Guard and maintained by Cuttyhunk Historical Society. Grounds/tower closed.