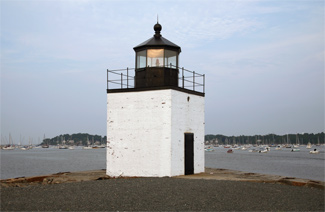 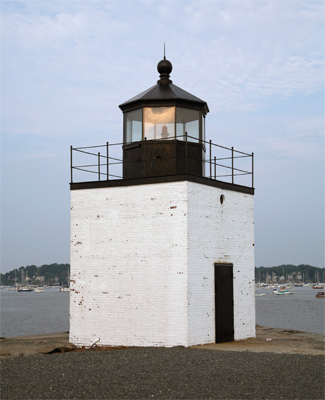 Though most of its lengthy extent is now empty, Derby Wharf is still bookended by two historic structures: the stately red-brick Custom House, where Nathaniel Hawthorne worked as a clerk before achieving literary notoriety in the mid-nineteenth century, is situated at the foot of the wharf, while Derby Wharf Lighthouse still serves to mark the wharfs outer end. Much of the economic history of Salem, Massachusetts can be traced through Derby Wharf. Salem residents periodically transformed their citys financial base in response to local and world events, at times taking incredible risks in order to reap incredible rewards. Derby Wharf was named for one such daring family. Richard Derby, Sr. began construction of the wharf in 1762, but it didnt reach its current half-mile length until 1806. By the time he began work on the wharf, Richard Derby had at least thirteen vessels engaged in local and international trade, and his fleet steadily grew as he built other ships to serve as privateers during the American Revolution.

Following the war, Elias Hasket Derby used part of his fathers fleet to become one of New Englands wealthiest merchants. During Salems Great Age of Sail, King Derby, as he came to be known, sent ships to China and India that returned with coveted silks, aromatic spices, and other fine goods and made him Americas first millionaire.

Derby Wharf was formerly lined with roughly twenty structures, ranging from small sheds to three-story warehouses and including Derbys counting house, the headquarters for the familys international trading empire.

By the mid-1800s, the shining success of Salems overseas trade had diminished, but its harbor remained important enough to local seagoing traffic that the Lighthouse Board recommended additional lights to complete the lighting of the harbor. The Boards Annual Report for 1870 contains the following information on Salem Harbor.

An appropriation was made at last session of Congress, for the establishment of three lights to mark the main channel leading into this anchorage, with the view to its becoming a harbor of refuge which may be safely entered at any time. Negotiations for the purchase of the proper sites have been in progress since the adjournment of Congress, and the works will be commenced as soon as the titles are perfected and approved by the Attorney General in conformity to law.

A pair of lights was established on Bakers Island, at the entrance to Salem Sound, in 1798, but additional lights were needed to help mariners safely reach protected anchorage available nearby. The three new lights recommended by the Lighthouse Board were a light at Hospital Point in Beverly, which would help mariners enter Salem Sound, and lights at Fort Pickering and Derby Wharf to function as range lights to mark the channel leading into Salem Harbor.

On October 3, 1870, the Federal Government purchased 1190 ½ square feet from the Derby Wharf Corporation on which to build a lighthouse, and the range formed by the lights at Derby Wharf and Fort Pickering went into operation on January 17, 1871. The government-sponsored light on Derby Wharf was initially displayed from an existing warehouse on the wharf, until the current twelve-foot-square brick tower was completed in the spring of 1871. A fifth-order Fresnel lens was used in the lantern to beam forth a red light, and Charles C. Pettergill served as the first keeper.

Of the seven men who cared for the light, John Lynchs tenure of twenty years, which started in 1885, was by far the longest. Due to the proximity of the light to town and the lack of space on the wharf, an official keepers dwelling was not built for the light. Rather, the keepers lived in their own homes and made regular treks out to the light.

A tall cast-iron chimney-pipe was fitted to the tower in 1886 for ventilation, and a ships side-light was also installed that year. The railing around the lantern had to be repaired in 1892, after an errant schooner broke it. A sixth-order Fresnel lens was requested for Derby Wharf Lighthouse in 1892 to replace the fifth-order lens, but in 1904, the tower was equipped with a fourth-order lens. A fourth-order lantern was provided in 1906, and in 1910, the power of the light was reduced through the installation of a sixth-order lens.

The last caretaker of the light was William M. Osgood, who walked from his nearby home to the light every morning and evening. When much of Salem was caught up trying to save their own homes and businesses in the devastating fire of 1914, Mrs. Osgood left her husband, who was trying to protect their home, and headed off to start the light on Derby Wharf. She barely made it out of the tower and back to town before smoke and flames engulfed the wharf. After the fire, Osgood needed a rowboat to reach the light.

In 1916, Harbormaster William G. Peabody complained that it was hard to distinguish Derby Wharf Light from the lights of the mill operated by the Naumkeag Steam Cotton Company. Rebuilding the light was considered but not carried out, and the following year the illuminant was changed from oil to acetylene allowing the light to be automated. The color of the tower was changed from red to white in 1922, and in 1930, Derby Wharf Light was electrified.

In 1933, wire cloth was placed around the lantern room to prevent glass breakage and damage to the Fresnel lens. This photograph, which shows the wire cloth in place, has the following caption:

Bit by bit Derby Wharf became a relic of its former glory, turning into a rotting dumping ground for scrap metal and abandoned railway cars. The National Park Service eventually recognized the value of the wharf and surrounding area, and in 1938 created Salem Maritime National Historic Site, the countrys first national historic site, which now includes nine acres of land with two wharfs, the Custom House, a few historic homes, and a downtown visitors center. Derby Wharf Lighthouse was not included in the site until 1979, after the U.S. Coast Guard decommissioned the light in 1977 and turned it over to the National Park Service.

Working with the Park Service, the Friends of Salem Maritime, a local volunteer organization, restored the tower in 1983 and had the beacon relit on October 4th of that year as a private aid to navigation. A solar-powered optic in the lantern room currently emits a red flash every six seconds. The tower was renovated again in 1989 using an $8,000 grant from the Massachusetts Historical Commission.

Derby Wharf Lighthouse is no longer alone on the pier, as in 2007 the National Park Service began reassembling a historic warehouse on the wharf. The structure, known as the Pedrick Store House, was built in nearby Marblehead in 1770 and acquired by the Park Service in 2003. A replica of the merchant ship Friendship, launched by the Park Service in 1998, just over two hundred years after the original was completed in Salem Harbor, is normally tied up at Derby Wharf.

Located at the end of Derby Wharf opposite the restored Custom House in the Salem Maritime National Historic Site.
Latitude: 42.51657, Longitude: -70.88356

For a larger map of Derby Wharf Lighthouse, click the lighthouse in the above map.

From Highway 1A in Salem, go east on Derby Street, and the lighthouse will be seen at the end of the wharf to your right.

The lighthouse is owned by the National Park Service and is part of Salem Maritime National Historic Site. Grounds open, tower closed.