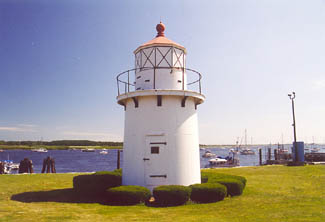 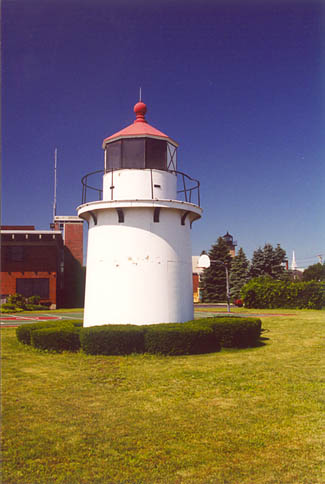 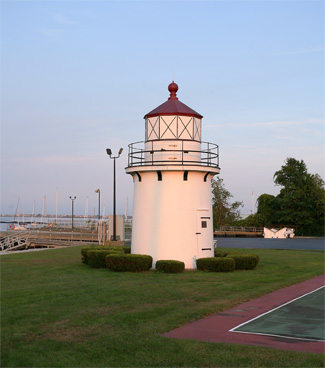 In the small town of Newburyport, Massachusetts, a once-in-a-lifetime experience awaits those who are willing to donate money to support lighthouse preservation efforts. With advance reservations, two to four people may enjoy six hours of marvelous views from the lantern room of Newburyport Harbor Rear Range Light along with fine dining catered by their choice of five local restaurants (food and drinks are extra). One should be aware that negotiating steep steps and a metal-rung ladder is required to reach this unique dining room. Despite Newburyports size, it played a significant role in the Triangle Trade by distilling molasses from Guadeloupe and the West Indies into rum. Newburyports shipyard prospered and supported an impressive whaling, fishing, and trading fleet.

Fires were routinely set on the beach at Plum Island to guide mariners to the mouth of the Merrimack River until the Marine Society of Newburyport erected two day beacons in 1783 and employed men to hoist lanterns atop them at night. The construction of two formal lighthouses on the island in 1788 proved even more beneficial for mariners wishing to enter the Merrimack River, but it was obvious that another set of range lights was needed to help mariners navigate roughly two miles up the river to reach the town.

Range lights, also known as leading lights, are typically a pair of lights displayed at different heights and located far enough apart to enable mariners to line one above the other to indicate the center of a channel. Normally, the front light is shorter than the back or rear light.

For several years, a pair of range lights in Newburyport Harbor was maintained by private subscriptions. In 1871, the citizens of Newburyport petitioned the Government to take charge of these lights. The Lighthouse Board estimated that it would cost $10,000 for two new structures to serve the range and also recommended that $6,000 be provided for a day beacon on Black Rock, as further aid to mariners entering this difficult harbor. Negotiations to obtain titles to the range light sites so that new towers could be erected were underway in 1872, and on June 10 of that year, Congress appropriated $10,000 for re-establishing and setting up two small beacon lights in harbor of Newburyport, the site of one of which has been washed away by a storm.

The construction of the present Newburyport Harbor Range Lights is detailed in Lighthouse Board records:

Local caretakers were initially responsible for the lights. The first keeper of Newburyport Harbor Range Lights was George Stickney, who started at an annual salary of $250 and served until 1886. He was followed by Matthew F. Barrett, who served from 1886 to 1889 and then again from 1893 to 1908, when he died of carcinoma of arm. Bernard Barrett then took charge of the light and served until at least 1921. Keepers at the nearby Plum Island Lights later assumed responsibility for the harbor range lights.

The height of the beacon in the front range light was increased eleven feet in 1901 when the original lantern room was removed and a wooden, shingle-covered, twenty-foot tower was placed on top of the fifteen-foot iron tower. The rear tower was also extended that year nine feet. The front range tower was painted brown, while the redbrick rear tower was left its natural color. In 1919, the octagonal wooden front tower and the channel-facing side of the rear tower were painted gray.

The front light has always displayed a fixed red light, while the rear light was fixed green up until March 15, 1907, after which date it was fixed red.

In 1961, both range lights were decommissioned. Not long after, the rear range light was sold to a private party. The front range light has been incorporated into the Merrimack River Coast Guard Station. The front range light suffered severe fire damage in the 1990s and has subsequently been restored to its original form with a replica lantern room placed on top of its iron base.

The Lighthouse Preservation Society is raising money to create a national memorial to commemorate Newburyports connection with the U.S. Coast Guard. The memorial will include a museum in Newburyport Harbor Front Range Light along with a monument entitled First Guardians, that will feature a uniformed representative of the Revenue Cutter Service, the Lifesaving Service, and the Lighthouse Service.

Diners who enjoy a meal atop Newburyport Harbor Rear Range Lighthouse help support the efforts of The Lighthouse Preservation Society to maintain the Newburyport Range Lights and create the memorial. The elevated dining room is reportedly quite popular and has raised over $100,000 for the society.

In 2009, the rear range tower received a new exterior paint job and a complete interior makeover of the lantern room under the direction of local interior decorator and textile designer, Bridgette Newfell. In addition, a powerful new heat pump was installed, which will allow the dining opportunity to be offered year-round.

Located on the grounds of the Merrimack River Coast Guard Station along the waterfront in Newburyport.
Latitude: 42.81151, Longitude: -70.86484

For a larger map of Newburyport Harbor Range Front Lighthouse, click the lighthouse in the above map.

From I-95 west of Newburyport, take Exit 57 and travel east on Route 113. After crossing Route 1, turn left onto Fruit Street and follow it until it ends at Water Street. Fruit Street will become Fair Street along the way. Turn right on Water Street, and then left at Newburyport Harbor Rear Range Light. The front range light, located on the grounds of a Coast Guard station, can be seen through a fence from the parking lot north of the rear range light.