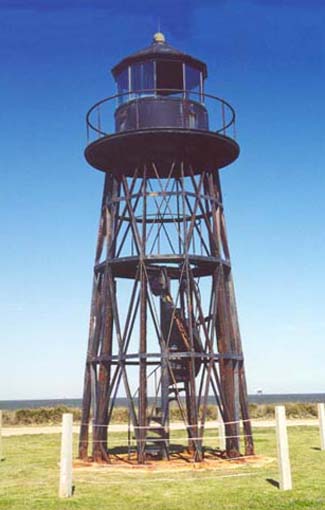 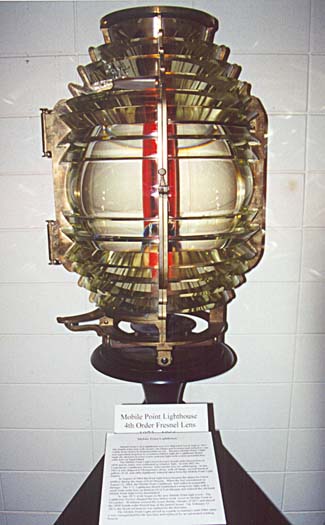 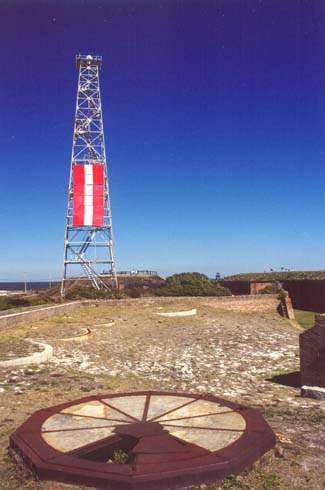 The fact that Alabama has the shortest coastline of any Gulf Coast state is offset by its having the Gulf Coasts largest bay  Mobile Bay. Recognizing the importance of the bay, the United States took control of it during the War of 1812. Work began on a fort at the bays entrance in 1819, two years before Spain officially ceded the region to the United States. The fort was built at Mobile Point, located at the western extreme of the peninsula that stretches across much of Mobile Bays mouth. Completed in 1834, the fort was named Fort Morgan in honor of General Daniel Morgan, a Revolutionary War hero. The history of Fort Morgan and that of the three Mobile Point Lighthouses that have stood nearby are tightly coupled. Congress appropriated $9,000 on May 14, 1820 for a lighthouse to mark the entrance to Mobile Bay, and Winslow Lewis completed a forty-foot tower on the point by June 1822. When attracting a keeper to this remote location proved difficult, a soldier from the fort was assigned to tend the light. The lamps in the lantern room atop the tower were finally lit for the first time on September 29, 1822.

Mobile Point Light was visible from ten miles at sea, but shoals kept ships about the same distance offshore, making it difficult to detect this landfall light. Congress appropriated $8,000 in 1835 to build a taller tower that could be seen from a great distance, but Winslow Lewis claimed that a new light-house was not necessary, and that for three thousand dollars he would fit up the light-house in such manner that it should be the best in the Gulf of Mexico. Instead of mounting the lamps and reflectors on a circle, Lewis placed seven on each side of a revolving triangular chandelier, so that their combined strength could be focused toward the mariner. The chandelier revolved once every three minutes, producing a brilliant flash every minute, and the improved light could be see for more than fifteen miles.

Mariners were not notified of the change in the lights signature from fixed to flashing, and several sailors confused Mobile Point Light with Pensacola Light, located roughly forty-five miles to the east. Although both lights now had a flashing characteristic, their flash rate was different, and the light at Mobile Point was much more powerful. Lewis placed the blame for the confusion squarely on the mariners, remarking that to mistake one for the other, would be like taking a star for the moon and noting other pairs of flashing lights in the country that were not as far apart as those at Mobile Point and Pensacola. Still, shipmasters asserted that the alteration was unnecessary, and, being made without notice, [was] wantonly careless and reprehensible.

In 1858, a 150-foot-tall seacoast light was built on Sand Island, three miles offshore from Mobile Point. No longer needed as a landfall light, Mobile Point Lighthouse was downgraded to a harbor light and outfitted with a fourth-order Fresnel lens that produced a fixed light. A pair of range lights was also established near Mobile Point Light in 1854 to guide vessels through the outlying shoals and into the bay.

Following the outbreak of the War Between the States, Confederate forces took control of the fort, and Mobile Point Lighthouse was deactivated. The lighthouse stood on a bluff near the southwest corner of the star-shaped fort, adjacent to a hotshot furnace. Cannon balls were heated in the furnace until they were white hot and then fired at invading wooden ships to set their hulls afire. The lighthouse would definitely have a front row seat for any battle for control of the bay that might comeand come it did.

At dawn on August 5, 1864, a fleet of eighteen Union ships commanded by Admiral David Farragut approached the entrance to Mobile Bay. A fierce exchange of cannon fire ensued at 7:30 a.m., during which the Tecumseh, a Union vessel, struck a mine (known as a torpedo at the time) and sank. The incident threw the Union fleet into disarray. It was at this critical juncture that Farragut gave his famous order Damn the torpedoes, full speed ahead. The remaining vessels sailed into the bay and succeeded in capturing the fort on August 23. During the battle for the fort, the lighthouse was struck multiple times, severely damaging one side of the tower.

Near the end of the war, a temporary wooden tower was placed atop the forts southwest bastion, and the old brick tower was demolished. The new structure, equipped with a sixth-order Fresnel lens, went into service on September 2, 1864 and guided vessels into the bay until a more permanent lighthouse could be built. Congress appropriated $20,000 on March 2, 1867 for rebuilding Mobile Point Lighthouse, but the Lighthouse Board delayed the project until construction on Sand Island Lighthouse was ready so one foreman could supervise both works. As a result of this delay, the 1867 appropriation reverted to the treasury, and Congress had to allocate $15,000 for Mobile Point on March 3, 1871.

The second Mobile Point Lighthouse, a thirty-foot iron tower manufactured in Washington, was erected on the forts southwest bastion like its predecessor, and the fixed red light from its fourth-order Fresnel lens was first exhibited on February 15, 1873. A new four-room addition was built onto the old one-room keepers dwelling. This residence was painted white and located outside the forts bastions.

After some of the military personnel were found to make unreliable light keepers, a civilian keeper was assigned to the lighthouse. The keepers and soldiers did not always make the best of neighbors. On several occasions the keepers complained of being harassed by the military. One such conflict is documented in a December 1887 letter from A.N. Damrel, Chief Engineer in Mobile, to the forts ordnance Sergeant:

I have been officially informed that you have now living with you in your quarters at Fort Morgan, the wife of the Lightkeeper. I do not know whether the charge is true or not and I have neither the time nor the opportunity to investigate it. It is of course unnecessary for me to instruct you that such conduct will not be permitted.

The characteristic of the light was changed from red to white in 1892, and a brick oil house was built at the station between June 9 and 12, 1897. The light was extinguished for a period during the Spanish American War as military regulations forbade any vessel from entering or leaving the bay at night.

A modern steel skeletal tower, seen in a photograph to the left, was erected at the point in 1963, and Tex Edwards was hired to remove the old iron tower. Instead of selling the lighthouse as scarp metal, Edwards put the pieces of the historic tower in storage. With Edwards in ill health, a firm he owned in Pensacola, Florida put the lighthouse on the market in 1977. Learning of the sale, David M. Smithweck, a member of the City of Mobile Museum, contacted the son of Tex Edwards who offered to donate the 20,000-pound tower to the State of Alabama.

The forts visitor center has on exhibit the fourth-order Fresnel used in Mobile Point Lighthouse, along with the secondorder Fresnel lens from Sand Island Lighthouse and other lighthouse artifacts. Visitors can walk around the fort and view the modern skeletal tower, the site of the earlier lighthouses, and the 1872 keepers dwelling.

The 1872 iron tower was removed from the grounds in September 2003 for restoration by Robinson Iron, but the disassembled lighthouse languished at Robinson Iron in Alexandria City, Alabama for more than a decade before funds were finally secured to restore the tower. In December 2014, the Alabama Historical Commission announced that $400,000, generated from a Baldwin County lease tax implemented seven years ago to help fund fixes to Fort Morgan, would be used to restore the lighthouse sometime in the latter half of 2015. As of 2017, however, no work had commenced on the tower.

For a larger map of Mobile Point Lighthouse, click the lighthouse in the above map.

The lighthouse is owned by Alabama Historical Commission. Tower closed.


Who knew? Alabama has some of the most beautiful white sand beaches and coastal line. In addition, Fort Morgan provides a great opportunity to see more than one lighthouse at once.