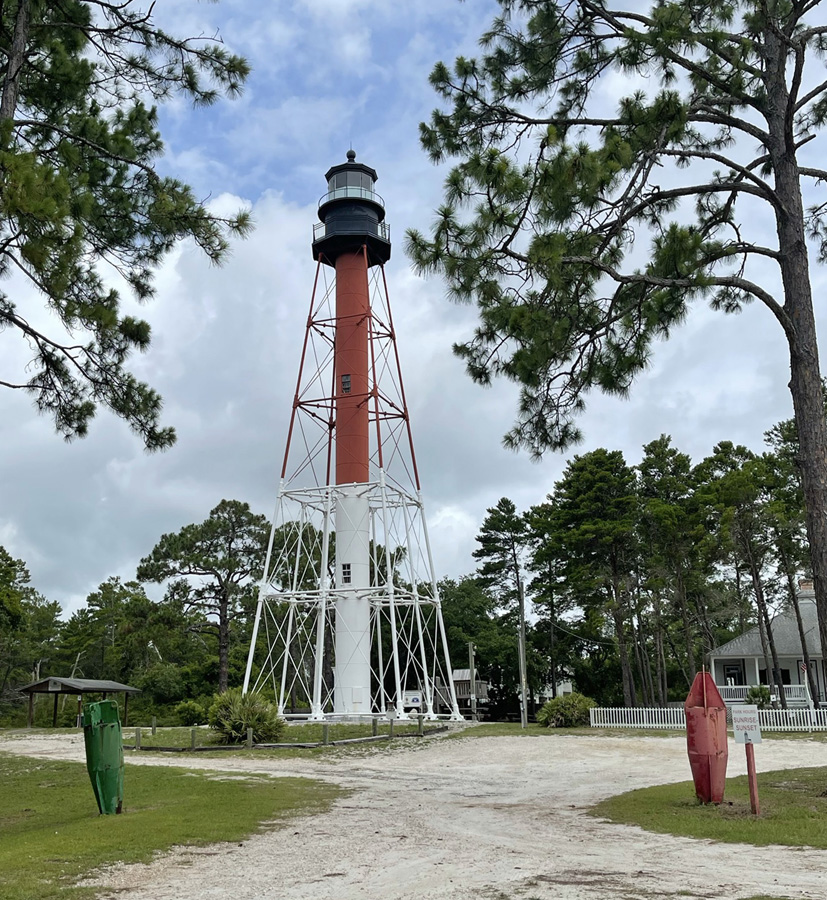 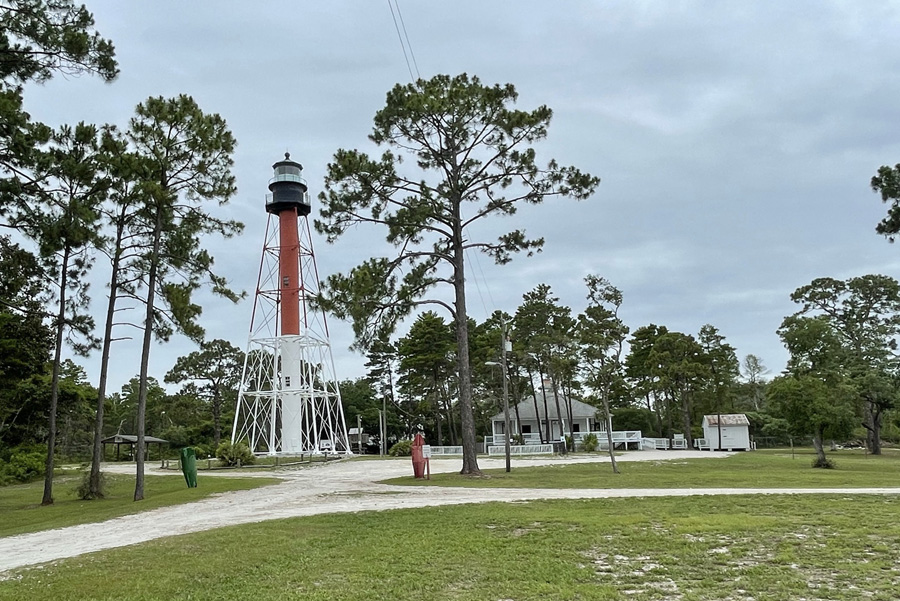 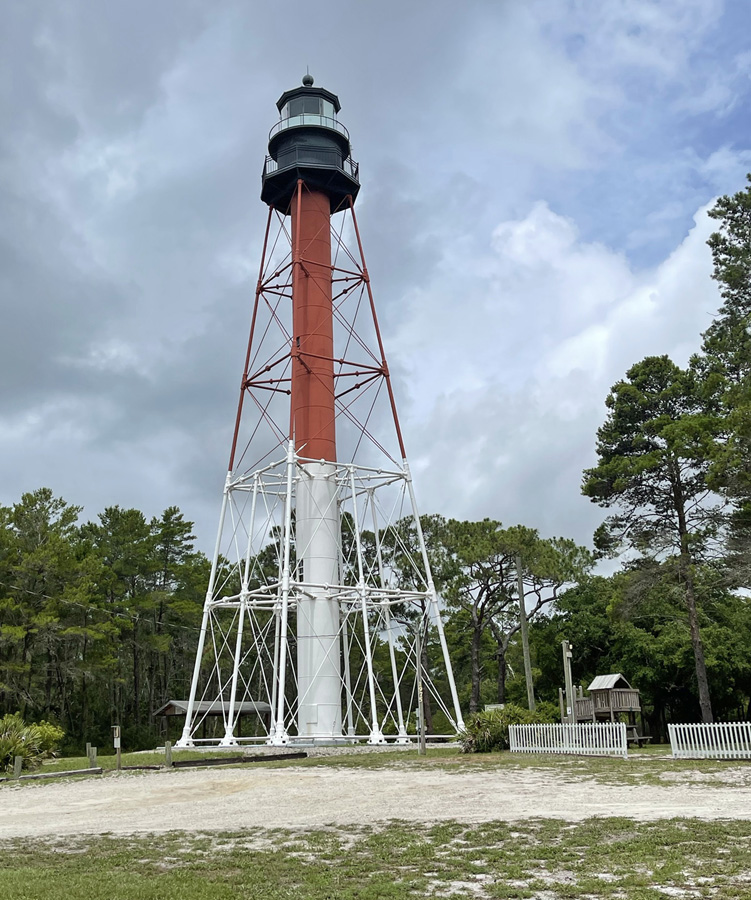 Prior to the advent of the railroad in the South, rivers were the main conduits for commerce, and cotton from inland plantations was the primary export carried along these twisting waterways to ships docked at Gulf Coast ports. In 1860, roughly seventy-five percent of the revenue of the nations treasury was based on cotton. Crooked River was a waterway of some import, and, true to its name, it winds between Carrabelle River to the west and Ochlockonee River on the east, forming substantial Saint James Island. A small port was established near the mouth of Carrabelle River in 1877 to participate in the cotton trade. Crooked River Lighthouse is actually the second lighthouse to assist maritime traffic in the area. The first to do so was located on Dog Island, a barrier island found just offshore from where Crooked River merges into Carrabelle River before flowing into St. George Sound. East Pass leads to St. George Sound from the Gulf and is defined by St. George Island to the west and Dog Island to the east. In 1838, the western end of Dog Island became home to one of the many lighthouses Winslow Lewis built during this time period. The fifty-foot, brick tower was constructed directly on the sand and was first lit on March 1, 1839. Just three years later, a hurricane caused the bottom portion of the tower to cave in, and a replacement tower made of wood was hurriedly erected to take its place.

This second Dog Island Lighthouse also had a short lifespan. A hurricane in 1851 flattened it and about everything else on the island. The third lighthouse built on the island was another brick tower, which rose to a height of forty-eight feet. This lighthouse survived the Civil War, but received significant damage at the hands of occupying Union soldiers. Given the downfall of its predecessors, it comes as no surprise that in 1873 this third tower also fell victim to a hurricane. Money was appropriated for yet another lighthouse on Dog Island, but due to the slow recovery of the Southern economy following the war, it was never built.

Cotton never regained its kingly status after the war, but fortunately the lumber industry took off, and in 1875 the areas first lumber mill was built for processing pine and cypress that were shipped down Crooked River. The resulting lumber and turpentine attracted many a schooner to the port in the 1880s. Consequently, interest in building a lighthouse in the area was rekindled.

In 1888, the Lighthouse Board requested a change in the language of the already approved appropriation for the replacement lighthouse on Dog Island, and the wording was altered the following year to read that the lighthouse could be constructed on or near Dog Island, or specifically on the mainland to the westward of the Crooked River in Franklin County, Florida. An appropriate twelve-acre site was selected that year, and an abstract title was sent to the U.S. attorney on September 19, 1899 for examination. The deed was judged insufficient, and condemnation proceedings were initiated to obtain the property. In July 1891, the United States courthouse containing the papers needed for the condemnation proceedings was destroyed by fire, and a clear title to the site was not obtained until August 22, 1892. Difficulties in locating the section lines delayed a survey of the reservation. Finally, after test borings were made, plans were prepared, and bids for the construction of the station were invited, work on the lighthouse began in January 1895.

The 103-foot iron tower, flanked by a keepers dwelling on either side, was completed in August 1895. James Williams, the first keeper, lit the light for the first time on October 28, 1895 and logged: Everything worked well, weather was clear and fine, Keeper stood watch to 12 p.m. Light was good throughout the watch. Commander Newman came to see how it worked at 8 p.m. The illuminating apparatus was a fourth-order bivalve lens, manufactured in 1894 by the Parisian firm of Henry-Lepaute. The lens revolved on a pool of mercury and produced a group of two white flashes every ten seconds, at a focal plane of just over 115 feet.

A lens lantern was suspended from the top of a black iron column, situated 645 feet shoreward of Crooked River Lighthouse, to form with the larger tower a pair of range lights for guiding mariners through the channel between St. George Island and Dog Island. The lens lantern had a focal plane of forty-eight feet, and a black lamphouse was located at the base of the supporting column. An oil house was added to the station in February 1896.

In 1899, a 414-foot-long cypress wharf with a T-head was built near the lighthouse to improve access to the station. Three fender piles were driven on the outside of the T-head, and the stations boathouse was built atop coppered piles fifty feet west of the T-head.

Before arriving to take charge of Crooked River in 1895, Keeper James A. Williams had served nearly twenty years as keeper at Cape St. George Lighthouse, where his father and an older brother had also served as keeper. Williams was sixty-seven when he was transferred to Crooked River, and he continued to work as keeper at the station for another eleven years. Williams first assistant was Tip Warren, who served from 1895 to 1898. On June 5, 1896, Keeper James A. Williams penned the following in the stations logbook directed toward his assistant:

Sir, You must keep an open passway at the front steps at the house you live in so I can get in and out without getting tangled if I should need your help at night and would have to go as quick as possible to call you and back to the light.

I would have to climb in and out. I enter this in this watch book and journal so if there should be any hard feelings or worse, it will show the cause there of and the blame will go where it belongs. This is doing my duty. I hope there will be no hard feelings for when you board up the steps to keep your baby from falling out the understanding was there was to be an open passway so I could pass in and out and call you when you were needed.

The white-bearded James A. Williams can be seen in this family photograph, which also shows his wife Leucretia and three of their sons who also served as lighthouse keepers. Albert Williams is immediately at his fathers left and served as his fathers assistant keeper until replacing him as head keeper at Crooked River in 1906. Standing below Albert is James C. Williams, who served at Cape St. George Lighthouse and Mobile Point Lighthouse. Crouching on the bottom step in the photograph is Charles H. Williams, who served as his brothers assistant at Crooked River from 1906 to 1909. James T. Williams, the son of James C. Williams, is the tallest boy standing on the top step, and he would end up marrying the daughter of a lighthouse keeper and going on to serve at Port Boca Grande Lighthouse, Sabine Pass Lighthouse, and New Canal Lighthouse. The Williamses certainly had one of the richest family legacies to be found in the United States Lighthouse Service.

The revolving mechanism for the lens at Crooked River was repaired and adjusted in 1901 so it could run for sixteen hours between windings. The entire tower, save the black lantern room, was painted red up until 1902, when the bottom half of the tower was given a coat of white paint to offset it from the surrounding pine forest.

Keeper Milton E. Wheelock was recognized in 1919 for towing a disabled launch, with two men, three women, and three children aboard, to the light station and providing food and shelter to the women and children. Keeper Thorwald Hansen, who was in charge of the station for over twenty-five years starting around 1920, was allowed to fly the lighthouse efficiency pennant for having the best-kept station in the district in 1930.

Crooked River Lighthouse was electrified in 1933, and then automated in 1952. As the tower no longer required daily attention, the keepers dwellings were sold at auction in 1964. One of the dwellings subsequently burned, but the other is still used nearby as a residence. The bivalve lens remained in use until 1976, when it was removed due to mercury leakage. For many years, the lens was located at the U.S. Coast Guard Eighth District Offices in New Orleans, Louisiana. Crooked River Lighthouse was decommissioned in August 1995, just two months before the 100th anniversary of its first lighting, and stood neglected for a few years before ownership of the tower was transferred to the City of Carrabelle in 2001. The lighthouse was then leased to the Carrabelle Lighthouse Association, which immediately started to raise funds to restore the tower and open it to the public.

The Carrabelle Lighthouse Association received a $298,900 Florida Communities Trust Restoration Grant in 2006 and an additional $400,000 from the state in 2007 to restore Crooked River Lighthouse and purchase two acres of surrounding land to create a public park. At dusk on December 8, 2007, over 240 people watched as the refurbished tower was reactivated with an acrylic replica of the towers original Fresnel lens. In April 2009, a ribbon cutting ceremony was held to officially open the Crooked River Lighthouse Keepers House Museum, which is housed in a replica of the keepers dwelling built adjacent to the lighthouse.

In 2011, the Carrabelle Lighthouse Association asked the Eighth Coast Guard District if it would return the fourth-order Fresnel lens to its original home. The district commander replied that after careful consideration of the request, the Coast Guard had decided to retain the lens in its district office, where it had been on display for over thirty-five years.

In April 2012, a historic piece of Crooked River Light Station did return home. Joan Matey, curator of the Keepers House Museum, was chatting with a local real estate agent one day when she learned that one of the stations old outbuildings was on a property about three miles west of the lighthouse. The 1893 plans for the station identified this 10 x 15 x 16 structure as a wash house. After many phone calls, the property owner was reached in Michigan, and an agreement was made to swap the historic shed for a new one. Ducky Johnson House Moving Company relocated the wash house from its home of forty-nine years to what had been its original home for sixty-eight years.

In February 2020, the original Fresnel lens used in Crooked River Lighthouse made its way back to Carrabelle, and after it was cleaned, the lens was placed on display in the keeper's house museum.

For a larger map of Crooked River Lighthouse, click the lighthouse in the above map.

From Carrabelle Beach, travel west on Highway 89 for just over a mile, where you see a dirt road to your right, which leads to Crooked River Lighthouse. The Crooked River Lighthouse Keeper's House Museum is open from noon to 5 p.m., Wednesdays through Sundays, and the tower is open for climbing on the same days from 1 p.m. until 4 p.m. The museum can be reached at (850) 697-2732.

The lighthouse is owned by the City of Carrabelle and managed by the Carrabelle Lighthouse Association. Grounds open, tower closed.