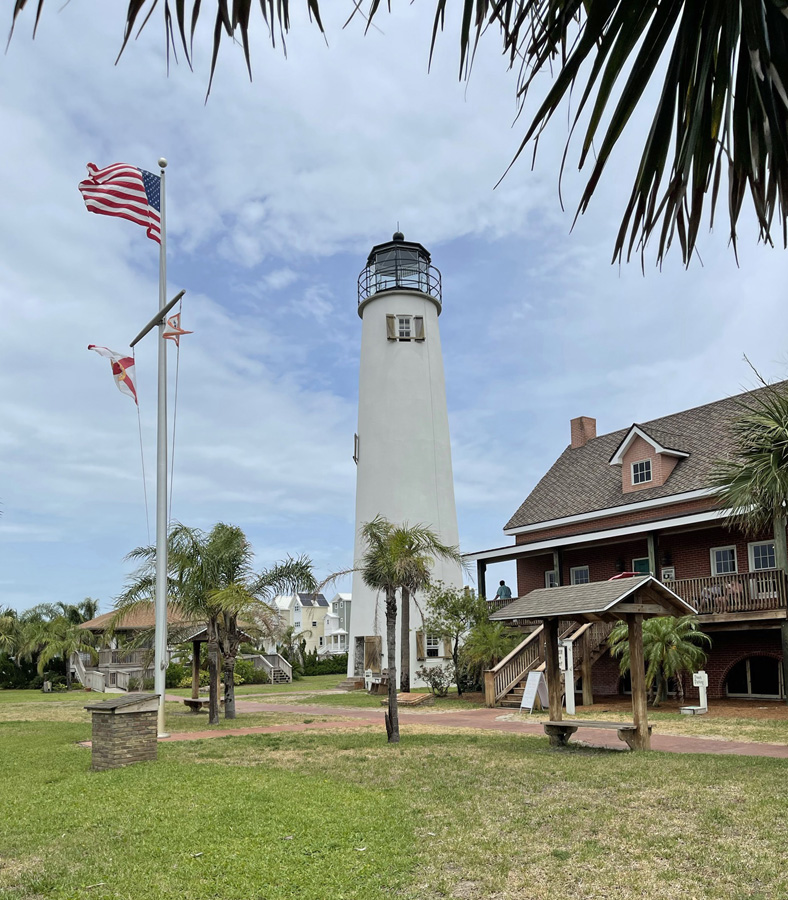 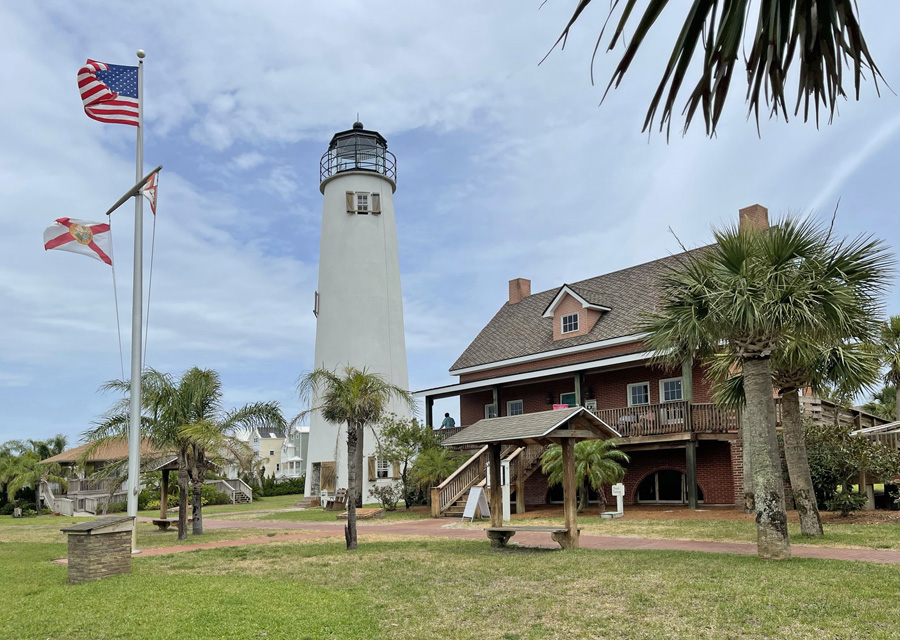 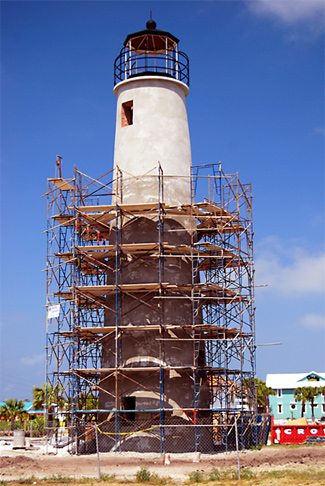 In the 1830s, Apalachicola was Floridas largest port, and cotton was the reason why. From the city, the Apalachicola River winds inland for over three hundred miles to Columbus, Georgia. Some fifteen steamboats once plied the river, transporting the fluffy white gold grown in eastern Alabama and western Georgia to the Gulf. Once it reached Apalachicola, the cotton was compressed into bales and then lightered across shallow Apalachicola Bay to West Pass, located between St. Vincent Island and St. George Island. The cotton bales were then transferred to three-masted ships, which transported the crop to mills located in New England and Europe. In 1836, 50,000 bales were shipped from Apalachicola, which by that time was the third largest cotton port on the Gulf Coast, behind New Orleans and Mobile. A lighthouse was obviously needed to mark Apalachicola Bay, and the efforts of the Florida Territorial Legislature to obtain one were rewarded with an $11,400 Congressional appropriation on March 3, 1831. A site was selected on the extreme west end of St. George Island to mark West Pass, the main entrance to Apalachicola Bay. Constructed in 1833 under the guidance of Winslow Lewis, the lighthouse stood seventy-five-feet tall and exhibited thirteen lamps.

St. George Island was shaped something like a giant check mark. From West Pass, the island extended southeast almost four miles before it reached its southernmost point, from where it bent northeast for twenty-five miles. It was soon noted that as vessels approached from the east, they would encounter the southern extreme of the island, before they could see the light on its west end. To remedy this situation, a local, Edward Bowden, was awarded a contract to build a new lighthouse at the southern extreme of the island.

The contract actually covered the construction of a lighthouse on Cape San Blas as well. Cape San Blas Lighthouse was to be built using material from the discontinued St. Joseph Point Lighthouse, and Bowden was instructed to cannibalize the 1833 lighthouse on the western end of St. George Island to build the new Cape St. George Lighthouse. Keeper Francis Lee first lit the lamps in St. Georges second tower on November 16, 1848. The lighthouse, which stood sixty-five feet tall, didnt survive even three years. In August 1851, a powerful gale flattened the tower and also toppled Bowdens tower at Cape San Blas, along with a lighthouse on Dog Island.

A new contract was awarded on December 10, 1851 to Emerson and Adams to build a replacement. The site for the islands third lighthouse was 250 yards inland from the previous site. Instead of building directly on the sand, a ring of pine pilings driven into the sand served as a foundation for the tower. Material salvaged from the destroyed lighthouse was used during the construction of the new station.

Following the outbreak of the Civil War, the lens and other valuables were removed from the station by order of the Confederate superintendent of lights. Keeper Braddock Williams was retained as keeper, until it became obvious that the conflict would prevent him from performing his duties for quite some time. The damage done to Cape St. George Lighthouse during the war was described as hardly less serious than at Cape San Blas, where the keepers dwelling was destroyed along with the door frames and window sashes in the tower. A new keeper, James Reilly, reactivated the light on August 1, 1866. Keeper Braddock Williams was given responsibility for the light at Cape San Blas, but he would return to St. George in 1868 and serve until 1874, when his son Arad, who had been serving as assistant keeper, was promoted to head keeper and Braddock was made his assistant. Tragically, in 1875, Arad Williams suffered a fall while painting the lighthouse and died four hours later. James A. Williams, Arads older brother, was then placed in charge of the station and served in this capacity for eighteen years.

A new keepers dwelling was built on the island in 1877 and was described as admirably adapted to its purposes after surviving a severe hurricane later that year without suffering the slightest damage. Keeper James Williams was paid the following complement in 1880 for his efforts: The place is kept in such good order that little work is required from any working party. The station is in excellent order. In 1888, a dark angle, found in the towers lens and attributed to damage it received during the war, led to the installation of a new third-order Fresnel lens. An oil house was built at the station in 1894.

Over the next several decades, the lighthouse withstood numerous storms and required only routine repairs. In 1939, sixty-year-old Thorton K. Cooper was serving as keeper, when the wife of the assistant keeper went a way for a visit, leaving Cooper to cook meals for six workmen installing new equipment at the station. Cooper went to Apalachicola on a Tuesday and told some acquaintances he was tired of the monotony of his life at the lighthouse and having to cook. Two days later, the assistant keeper found Keeper Cooper dead in his room with a bullet wound to the head.

Perhaps surprisingly, the lighthouse witnessed action during a second deadly conflict: World War II. Part of St. George Island, along with Dog Island and a large area on the mainland, was used to train troops for the eventual invasion of Europe. A lookout tower was built just west of the lighthouse to spot enemy activity offshore.

In the mid-1900s, St. George Lighthouse had separate dwellings for the keeper and his assistant, but the assistants dwelling was lost to fire in the 1940s. In 1949, the Fresnel lens was removed and the station was automated, leaving the keepers dwelling vacant.

Barrier islands tend to migrate, losing sand in some areas while gaining it in others. The 1852 lighthouse originally stood over 500 yards from the Gulf, but by 1990 the beach erosion on the Gulf side of the island threatened the lighthouse. Hurricane Andrew removed most of the remaining buffer zone in 1992. The Coast Guard, realizing that the lighthouse might be lost, deactivated the light in 1994. The St. George Island Yacht Club, a tax-exempt, charitable organization without yachts or a club, attempted to halt the decommissioning of the light. When that failed, the group tried to raise money to keep the light operating. Local fishermen and shrimpers supported the effort, but the project was unsuccessful.

Before the beach could build back up following Hurricane Andrew, Hurricane Opal struck in 1995. The resulting tidal surge swept around the lighthouse, forcing it off its piling foundation. As the lighthouse settled into the sand, the circular staircase was torn from the interior walls, and the tower developed a pronounced lean. The oil house and keepers dwelling were also heavily damaged by the storm, however, the dwelling apparently had suffered significant damage already at the hands of a group of coastguardsmen who found it made good firewood.

Many thought the lighthouse was certainly lost, but a local campaign called Save the Light was started by John Lee, editor of the Apalachicola Times. The Cape St. George Lighthouse Society was soon formed, and over the next couple of years the group managed to raise over $250,000. In June 1999, contractor Bill Grimes, hired by the association, arrived on the island to save the lighthouse. Armed with a backhoe, Grimes took a low-tech approach towards saving the tower. He slowly excavated sand from beneath one side of the tower, and after many days the lighthouse started to settle back to vertical. With the tower level, several holes were drilled through the four-foot thick walls at the base of the tower. A ring of corrugated metal was then formed around the bottom of the tower, and a ten-foot-tall base of cement was poured in the mold. The concrete flowed through the cutouts made in the base of the tower, securing the lighthouse to the cement block. For a few years, the hollow tower stood securely anchored in its own cement island, permitting it to remain upright, even as water occasionally encircled the tower.

Hurricane Dennis struck the Florida Panhandle on July 10, 2005 as a Category 3 hurricane. As the storm was compact and fast-moving, damage was less than had been predicted. Cape St. George Lighthouse, located roughly 100 miles from where Dennis made landfall, survived the storm intact as shown in this photograph taken on July 11 by Debbie Hooper from Port St. Joe, Florida. 2005 was a record year for hurricanes, but as no other hurricanes came close to Cape St. George Lighthouse, it seemed the tower would survive another hurricane season. However, on October 21, years of stress on the leaning tower apparently became too much, as the lighthouse toppled into the gulf at 11:45 a.m. This dramatic photograph, taken the following morning by Debbie Hooper, shows the partially submerged tower.

On December 1, 2006, a replica of Cape St. George Lighthouses lantern room was completed atop a custom-made platform in the County Park on St. George Island with hopes that work on construction of the new tower would begin the next year. Plans for the new tower were based on original drawings obtained from the National Archives in Washington, D.C., and ground was broken for the project on October 22, 2007. Sixteen square concrete pilings were driven almost forty feet into the ground to provide support for the tower, and atop these a reinforced cement foundation was poured on November 30. The first bricks were laid in early December, and over the next several months the tower steadily grew until the sixty-five-foot tower was topped off on March 21, 2008. An eighteen-piece soapstone deck, imported from Brazil, was set in place atop the brickwork in late March, and on April 2, the lantern room was lifted aloft by a crane to take its place atop the tower. The exterior of the tower was then stuccoed and a heart-pine staircase installed inside the tower before it first opened for visitors in November 2008. The State of Florida provided $575,000 for reconstructing the lighthouse and establishing a park. On April 4, 2009, a dedication ceremony was held for the lighthouse with Neil Hurley as the keynote speaker.

After spending much time hunting for the third-order Fresnel lens that was used in Cape St. George Lighthouse, the St. George Lighthouse Association decided in 2015 to purchase a replica lens from Artworks Florida for display at the lighthouse. The organization believes a lens on display in Berwick, Louisiana might be the one removed from Cape St. George in 1949, but efforts to negotiate with the town proved futile. This video shows Dan Spinella of Artworks Florida assembling the replica Fresnel lens in the keepers dwelling on April 14, 2016.

For a larger map of Cape St. George Lighthouse, click the lighthouse in the above map.

The former site of the tower on Little Saint George Island is accessed most easily by boat, although it is possible to kayak to the island too. A thorough list of individuals and companies which offer boat tours to the island can be found at the Apalachicola Bay Chamber of Commerce website.

The reconstructed lighthouse is located on Saint George Island. To reach the island, turn south on Island Drive from Highway 98/319, several miles east of Apalachicola. After a few blocks, Island Drive leads to the Bryant Grady Patton Bridge that will take you to the island. When you reach St. George Island continue straight until the road tees, and you will see the lighthouse.

St. George Lighthouse Association, which can be reached at (850) 927-7745, has the tower open for visitors year-round.