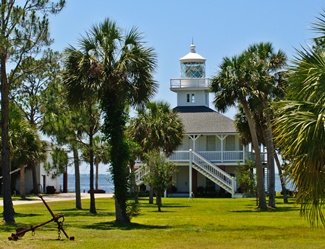 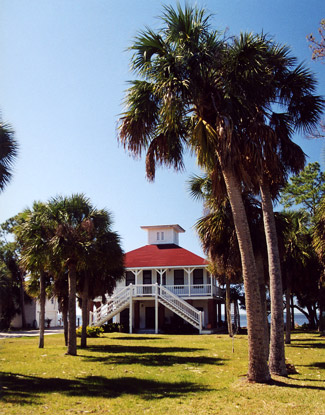 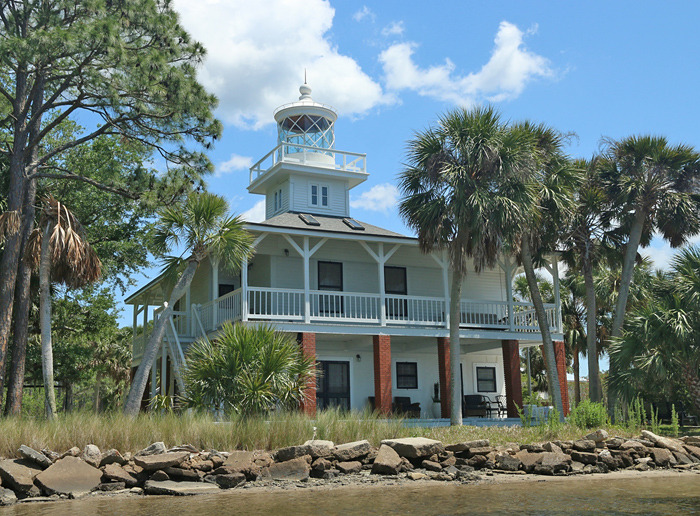 From the southernmost point of land along Floridas Panhandle, Cape San Blas extends like an arm three miles west and then fifteen miles north, forming the oblong St. Joseph Bay. The bay was known to be one of the best harbors along Floridas Gulf Coast, and in 1836 the town of St. Joseph was established on its shore. With no river feeding the bay, it was difficult for the port at St. Joseph to flourish commercially as no economical way of transporting the timber and cotton from outlying areas to the bay existed. To overcome this problem, two railroads were extended east from the city to connect with the Apalachicola River, and soon thereafter, the town of St. Joseph started to prosper. In 1836, the Florida Legislative Council petitioned Congress for the construction of a lighthouse to mark St. Joseph Bay. Congress responded on March 3, 1837 with $10,000, and a contract for that amount was awarded to Winslow Lewis for the construction of a lighthouse on the northern end of the cape near the entrance to the bay. A fifty-foot tower, outfitted with fifteen lamps backed by sixteen-inch reflectors, was constructed during 1838, and Ephraim Andrews activated the light for the first time in early 1839.

The lighthouse wasnt the only new arrival to St. Joseph in 1838. The Territory of Florida also held its Constitutional Convention there that year to lay the groundwork for its bid at statehood. St. Joseph received much publicity during the month the delegates were in town, and things were looking up for the city. Then, in 1841, a ship arrived in port and introduced yellow fever into the community. In just a matter of weeks, the population of the town was decimated. Two years later, a hurricane, accompanied by a high tidal surge, managed to destroy what remained of the city. Ironically, the city of St. Joseph didnt survive to see Florida become the twenty-seventh state in 1845.

In 1843, Stephen Pleasonton, who was responsible for the countrys lighthouse, gave the following reason for his recommendation to discontinue St. Joseph Bay Lighthouse. The town of St. Joseph having been abandoned some time ago, (for the use of which the light-house at the entrance of St. Josephs bay was established,) the collector at Apalachicola reported that the light ought to be discontinued, it being now a useless expense. The tower, however, remained active until 1847, when a lighthouse was built at Cape San Blas elbow. Keeper Andrews, the lights one and only keeper, extinguished the light for the last time that year, and the lantern room and other material were removed for use at the new lighthouse farther south. Andrews might have had a lonely life on the tip of the cape, but his isolation did have one advantage  he didnt contract yellow fever.

Even though there were few inhabitants along its shores, St. Joseph Bay still served as an excellent harbor of refuge for mariners. In 1867, the Lighthouse Board wrote, This, the second harbor in capacity and safety on the Gulf coast, and excelled only by Pensacola, is at present without a light. Though there is not, as yet, any important town on the bay, its merits as a harbor of refuge for ships of any size would justify the expense of a light-house of the fourth order, which would be sufficient to render the bay accessible at night. The Lighthouse Board renewed its request for a lighthouse to mark the entrance to St. Joseph Bay in 1888, and the following recommendation was repeated in each of its reports for the next eleven years:

The fishing fleet on this coast is large. A southerly gale is calculated to drive these vessels upon a lee shore. The only harbor of refuge for some 60 miles is St. Joseph Bay. This is easily accessible in the daytime, but at night it is difficult of entrance without a light. The Board is decidedly of opinion that it would be largely to the interests of the fishing fleet in particular, and the commerce and navigation of the Florida coast in general, should this light be established.

Congress finally appropriated $15,000 for the lighthouse on July 1, 1898. A thorough investigation of the area determined that the preferred site for the lighthouse was on the mainland at Beacon Hill, opposite the northern tip of the peninsula where St. Joseph Bay Lighthouse had stood. Six bids were received for the work, but being too high, they were rejected, and the lighthouse was built by hired labor.

The Lighthouse Board provided the following description of the work carried out in 1902:

The station is a 1-story frame building resting on brick piers about 8 1/2 feet above ground. It contains five rooms, with a watch room over the center of the building surmounted by an iron lantern of the third order with a lens showing a fixed white light. The station is inclosed with a picket and board fence. A brick oil house was built with galvanized iron roof and brick floor. The range beacon is a square, black pyramid, covered with horizontal slats on posts resting on mudsills. It is to bear a 270° lens-lantern light, and with St. Joseph Point light will form a range for crossing the bar at entrance to St. Joseph Bay, Florida.

A lens lantern was displayed from the lantern gallery of the lighthouse from August 25, 1902 until March 3, 1903, when a third-order lens inside the lantern room was activated. A 245-foot-long wharf provided access to the station, and a well was driven under the dwelling and connected with a pump to provide water.

For over fifty years, St. Joseph was known as the City of the Dead, but people started to return to the area around the turn of the nineteenth century. Eventually, the City of Port St. Joe would be established roughly two miles north of the site of St. Joseph.

As the lights first keeper, Charles Lupton lived with his wife Minnie at the station for twenty-six years. Life was not always pleasant or easy, and the Luptons had to hire a teacher to live at the station for a few months during the winter to school their seven children. When supplies were needed to supplement the family garden, they occasionally had to travel over fourteen miles west to the nearest community of Farmdale. By far the worst hardship for the Luptons was the loss of two of their children while they were stationed at the lighthouse: Carrie at the age of eighteen and Aubrey at the age of nine.

In 1921, just a year into Prohibition, Keeper Lupton was commended for notifying county authorities of the grounding of the gasoline launch Curlew and of contraband goods that had washed up on the beach. Upon Keeper Luptons retirement in February 1928, I.C. Lupton returned to his childhood home to retrieve his father, who had never learned to drive. Ill never forget that day, said I.C. It was blowing a hard northwesterner and the Gulf was solid white caps. That was crying time for me.

During World War II, ten coastguardsmen were stationed at the lighthouse to watch for enemy activity. The area beneath the lighthouse was converted into a barracks, but the men would have to pass through the stations living quarters to serve lookout duty in the lantern room. The daughters of Keeper Walter Roberts would iron the uniforms of the coastguardsmen for ten cents each, and his sons would polish their boots.

A light on a seventy-eight-foot iron tower replaced St. Joseph Point Lighthouse in 1955, and five years later, the old dwelling was sold to Lee Williams for $300. Due to the height of the structure, the watchroom and gallery had to be removed before the lighthouse was moved (the Coast Guard had previously removed the lantern room), and during this process, they were dropped and reduced to scrap. At its new home on a farm three miles inland along Overstreet Highway, the lighthouse was used as a dwelling by its first owner. Under its second owner, Sam Harmon, the lighthouse was relegated to serve as a hay barn, with cattle feeding from its porches. In 1970, Danny Raffield purchased the lighthouse for $1,200, but it wasnt moved the roughly twenty miles south to its new home on St. Joseph Bay until November 1979. By then, the structure had become known as the traveling lighthouse.

Raffield visited other lighthouses and conducted research in Washington, D.C. to assist in his quest to restore his lighthouse and fabricate an authentic lantern room for it. A huge break came when Raffield was put in touch with a Coast Guard officer in New Orleans who had the original blueprints for St. Joseph Point Light Station, including the lantern room.

After several years of meticulous restoration, the Raffields were able to move into the lighthouse. They enclosed the bottom floor, converting it into a kitchen and living room. A massive spiral iron staircase replaced a wooden set of stairs and forms the spine of the dwelling, connecting all three levels. The Raffields had craftsmen replicate the original lantern room at Raffield Fisheries, and it was finally placed atop the lighthouse on April 14, 2011, capping a restoration effort that spanned over forty years. Today is just the icing on the cake. To be able to sit in it means that my dad is happy and for me thats the best part of this day, said the Raffields daughter on the day the lantern room was put in place.

In October 2018, Hurricane Michael ravaged the coast on St. Joseph Bay and destroyed the tower that had displayed St. Joseph Bay Rear Range Light. The Coast Guard eventually erected a new tower, and this photograph of it was taken in 2021.

Along with the lighthouse, other reminders of the history of St. Joseph still exist. In 1922, a marble monument engraved with the names of the delegates of the Constitutional Convention was erected on a thirteen-and-a-half-acre site on Monument Avenue in Port St. Joe. A museum was later added to the site and opened to the public in 1955.

For a larger map of St. Joseph Point Lighthouse, click the lighthouse in the above map.

South of Port Saint Joe where Highway 98 makes a 90 degree turn, turn south on County Road 30A and continue for 2.2 miles where you will see St. Joseph Point Lighthouse on your right. The modern tower from which St. Joseph Bay Rear Range Light is displayed can be seen at the intersection of Lighthouse Avenue and Beach Hill Park Road in St. Joe Beach.