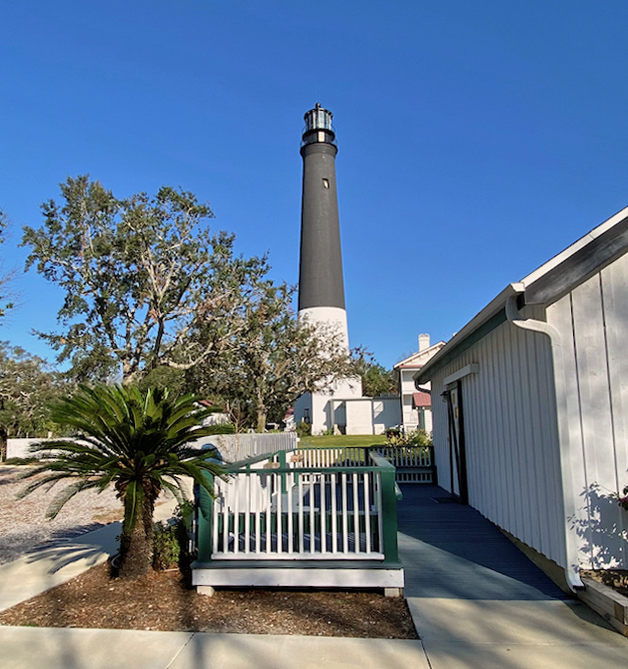 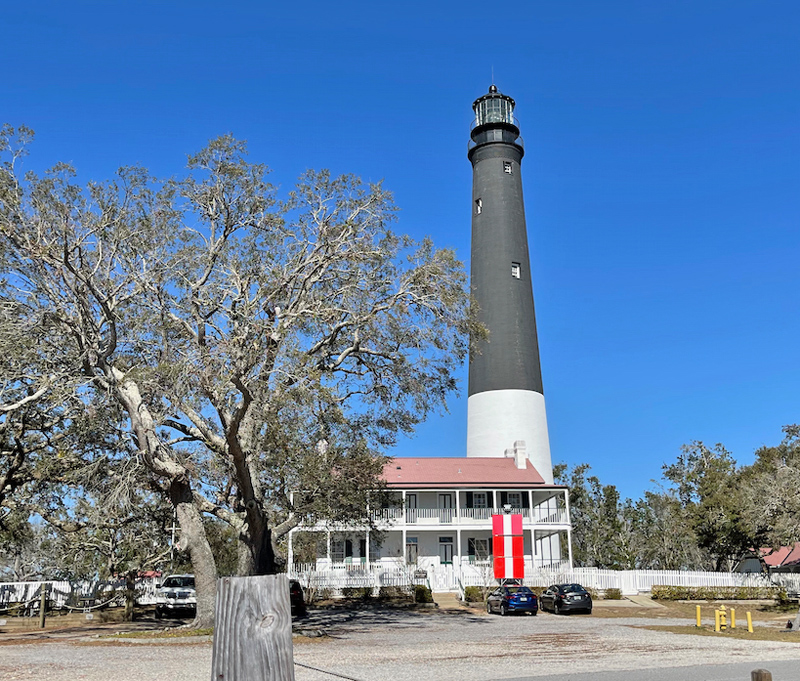 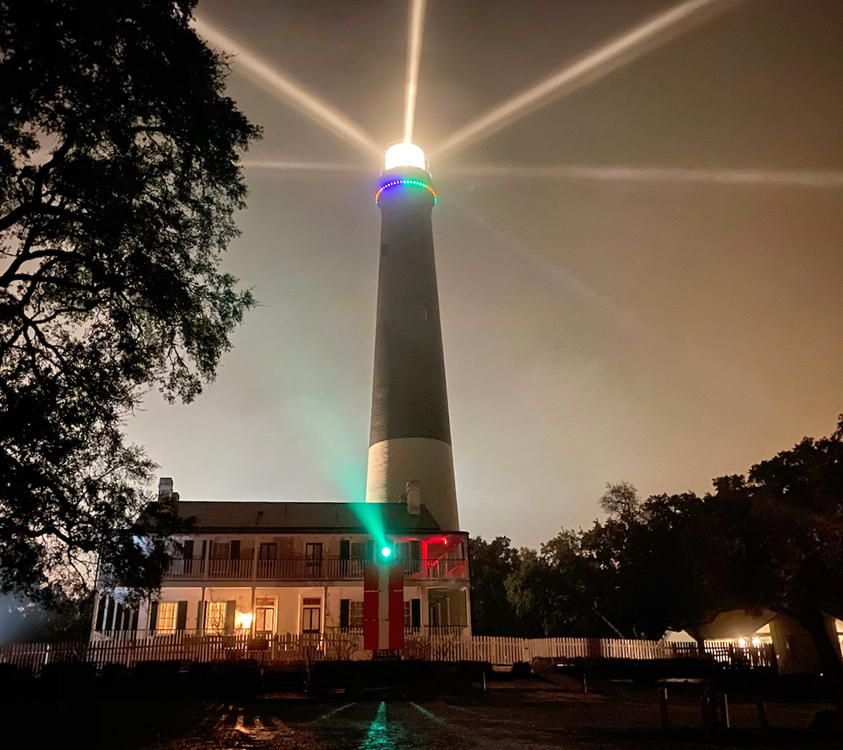 The banners of five nations, Spain, France, England, the Confederate States of America, and the United States, have flown over the City of Pensacola, giving rise to its nickname, The City of Five Flags. Pensacola is Floridas second oldest city and has the deepest bay on the Gulf Coast. The mouth of the bay is bounded by Santa Rosa Island to the east and Perdido Key to the west. To guard the entrance, Spain established Fort Barrancas atop a sixty-foot bluff on the mainland opposite the bays mouth. Soon after the United States took control of Florida from Spain in 1821, the federal government, recognizing the importance of Pensacolas harbor, moved to establish both a naval yard and lighthouse there. On March 3, 1823, Congress authorized $6,000 for Pensacola Lighthouse. To serve the port until the lighthouse was finished, the floating light vessel Aurora Borealis was transferred from the mouth of the Mississippi, where Franks Island Lighthouse had just been completed. The vessel was positioned in calm waters behind the western end of Santa Rosa Island. A site just west of Fort Barrancas was selected for the lighthouse so ships would be able to steer directly towards the light to enter the harbor, something that was not possible with the lightship.

On March 24, 1824, Winslow Lewis, responding to an advertisement in the Boston Patriot, offered to build the lighthouse and associated keepers dwelling for $4,927. For an additional cost of $750, Lewis would fit up and Light the Light House with ten patent Lamps and ten fourteen inch Reflectors and furnish two spare Lamps, six double tin oil butts to hold ninety gallons each, six wooden boxes, One lantern canister and trivet. One tube box. One wick box. One oil carrier. One torch. One hand lantern Lamp. One oil feeder. Two files. Two pairs of scissors. Six wick formers and have it completed in thirty days after the Light House is finished. Lewis offer was accepted by Stephen Pleasonton, fifth auditor of the Treasury, on April 2, 1824.

The light from the new tower was first exhibited on December 20, 1824 by bachelor Jeremiah Ingraham. To produce a flashing signature, two groups of five lamps were fastened to opposite sides of a framework, which was rotated by a clockwork system. After two years at the post, Ingraham married Michaela Penalber of Pensacola. Together, they managed the light and raised three children at the station. When Jeremiah passed away in 1840, Michaela took over responsibility for the light. In the late 1840s, the clockwork mechanism failed and two men were hired to rotate the lamps by hand, until repairs were made. Michaela served until her own death in 1855, when her son-in-law, Joseph Palmes, was hired as keeper.

By 1850, regular complaints were starting to be voiced regarding the lighthouse. Trees on Santa Rosa Island were said to block the light, and the light was considered too dim. In 1852, the newly established Lighthouse Board recommended that a first-class seacoast light with a height no less than 150 feet be built at Pensacola. Congress allocated $25,000 for the lighthouse in 1854, and an additional $30,000 in 1856. A site was selected one-half mile west of the original lighthouse, and work on the tower was supervised by John Newton of the Army Corps of Engineers. Construction was completed in 1858, and the lamp in the towers first-order Fresnel lens was first lit on New Years Day, 1859 by Keeper Palmes. The tower, which had a basal diameter of thirty feet and gradually tapered to fifteen feet, stood 160-feet-tall and was painted white.

On January 10, 1861, Florida seceded from the United States. Union forces abandoned Fort Barrancas in favor of Fort Pickens, located on the western end of Santa Rosa Island, allowing the lighthouse to fall into the hands of Confederates, who eventually discontinued the light and removed the lens. The opposing forces warily watched one another across the bay for months. Then on November 22, 1861, a two-day artillery battle erupted. The Lighthouse Batteries were frequent targets for the guns of Fort Pickens, and roughly half a dozen rounds struck the tower. Confederates evacuated the area on May 9, 1862, and the lighthouse fell under Union control. None of the rounds penetrated the outer wall of the lighthouse, and the tower was found to be in good condition. A fourth-order lens was placed in the lantern room, and the tower was lit again on December 20, 1862.

The original first-order Fresnel lens was recovered after the war, but it was apparently sent elsewhere, as a first-order lens didnt replace the temporary fourth-order lens in the towers lantern room until 1869. That same year, a new dwelling was built for the keepers, and the towers daymark was changed. The bottom third of the tower remained white to stand out against the trees, but the top portion was painted black to stand out against a possibly cloud-filled sky.

Who says lightning doesnt strike twice in the same place? Pensacola Lighthouse was zapped in 1874, and then struck again the following year. The towers lightning rod was found to be defective, as the surge of electricity melted fixtures in the call-bell and broke several large holes in the brick masonry of the covered way linking the tower to the keepers dwelling. Nature took another swipe at the lighthouse on August 31, 1886, when a rare earthquake shook the tower. A keeper penned the following report on the earthquake: It lasted between three and four minutes, and was accompanied by a rumbling, as if people were ascending the steps making as much noise as possible. This shock was like a tremor, causing the lens to vibrate from side to side. The pendulum clock on the lower floor was stopped by the shock at 9:07 p.m.

In the period between the lightning strikes and the earthquake, cracks were discovered in the tower. It was thought that they might have been caused by the shots the tower received during the Civil War, coupled with the strain from subsequent hurricanes, and the Lighthouse Board acted quickly to repoint the tower from top to bottom. A frame addition was added to the rear of the dwelling in 1897 to serve as a kitchen, and in 1902, a two-and-a-half-inch manila rope was

During the twenty-three years following the relighting of the tower after the war, eleven individuals served as head keepers. Nine of them had to be removed for reasons ranging from intoxication to dereliction of duty. The appointment of George T. Clifford in 1886 finally ended the string of short-timers. Clifford served thirty-one years, until his retirement in 1917.

At times, range lights were established in the bay as a further aid to navigation. When vessel traffic increased as a result of the lumber trade in the 1880s, a bay beacon was established to operate as a range light in conjunction with the lighthouse.

Though the lighthouse was designed to aid mariners, in February 1936 it helped guide an Eastern Airlines plane to a safe landing at an adjacent, water-soaked runway. Bound from Miami to Newark, the plane encountered a fierce storm near Jacksonville. After battling weather as far north as Charleston, the plane turned back to Jacksonville and then headed west to try to escape the storm. The planes radio went dead during the ordeal, prompting airline officials to alert mariners that one of its planes had disappeared over water somewhere between northern Florida and Georgia. Just as the pilot was about to switch to his emergency fuel supply, he spotted a flash from Pensacola Lighthouse, and was able to safely ride the beam to the air field.

In 1939, Pensacola Light Station was electrified and transferred to the Coast Guard. The station remained staffed until automation in 1965. With the dwelling unused and the tower posing possible risk to jets using the airfield completed nearby, plans to demolish the station were discussed. These plans added fuel to a growing preservation movement in Pensacola, and in 1971, Gulf Islands National Seashore was established to help preserve Fort Barrancas, Fort Pickens, and Pensacola Lighthouse.

The lighthouse is located on the grounds of Naval Air Station Pensacola, home to the Blue Angels. The original 1824 lighthouse site is next to the Navy Lodge, located between the 1858 lighthouse and Fort Barrancas. In 1998, before an addition to the lodge was made, a team of archaeologists was brought in to recover any artifacts from the site of the original lighthouse and dwelling. A published report indicates that glass, keys, latches, toys, and hairpins, all thought to be associated with the original lighthouse, were discovered at the site. The archaeologists could even determine the Ingrahams diet based on evidence recovered at the site. Some of the artifacts will be displayed at the Navy Lodge.

The keepers duplex adjacent to the 1858 lighthouse is leased to the Pensacola Lighthouse Association, which was formed in 2006 to interpret the site. The east side of the duplex has been restored to represent an 1880s  1890s keepers dwelling, while exhibits on Civil War activity in the area, Naval Air Station Pensacola, and on the lighthouse itself are housed in the west side. A teapot and a piece of the lantern deck from the original Pensacola Lighthouse are also on display. In 2012, the stations dilapidated carriage house was renovated and opened as a visitor center and museum shop.

For a larger map of Pensacola Lighthouse, click the lighthouse in the above map.

From I-10 East or West in Pensacola, take Exit 7 (Pine Forest Road, 297) and travel south about 1.5 miles and then turn right onto Blue Angel Parkway. Drive about 12 miles to the west gate of NAS Pensacola. Pensacola Lighthouse will be on your right, 2.5 miles after passing through the gate.

During the Blue Angel flight season, twelve individuals may view the practice sessions from atop the lighthouse. Admission for this special event is $20, which also includes a tour of the Keepers' Quarters. Reservations are required.

Located near the lighthouse is the Naval Air Museum, which houses several aircraft and an IMAX theater.

The lighthouse is owned by the Coast Guard, but the Pensacola Lighthouse Association maintains the dwelling and tower. Tower/dwelling open during tours, grounds open.


We arrived in Pensacola at night after a long drive and a red-eye flight the night before, but we decided to trek down to the lighthouse before checking into our hotel. What a great decision. The original Fresnel lens with its eight bull's-eyes is still in use atop the tower. Lingering on the lighthouse grounds or on the sandy beach nearby and watching the beams reaching out to sea like the arms of a giant octopus is a great way to spend an evening. A trip to the tower during daylight hours isn't bad either.

In 2009, the Syfy Channel ran an episode of its Ghost Hunters series filmed at Pensacola Lighthouse. While examining the lighthouse and keeper's dwelling, paranormal investigators experienced startling noises and sensations that convinced them the site is haunted.