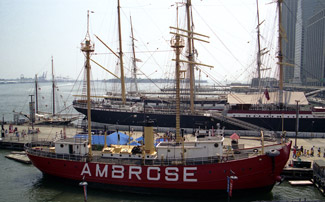 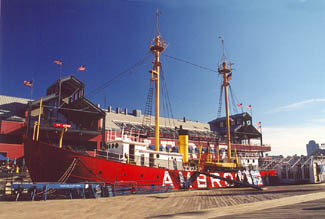 After Congress approved $4 million in 1899 for the project, the Ambrose Channel in New York Harbor was dredged to a depth of forty-five feet and a width of 2,000 feet. Seven years later, Congress appropriated funds to erect a number of navigational lights along the channel, including a pair of range lights at Staten Island and West Bank. To complete the lighting of the channel, Sandy Hook Lightship was moved to a site eight miles east of Rockaway Point in 1908 and renamed Ambrose Lightship. Also designated as LV 87/WAL 512, the first Ambrose Lightship was built in 1907, costing just under $100,000. Originally, it had three oil lanterns shining from each masthead, but they were replaced with electric lights in 1908. The ship had two fog signals, a twelve-inch steam whistle and a hand-operated fog bell. By 1921, the ship had been further equipped with a submarine bell, a two-way radio, and a radiobeacon. While out of the water for a major overhaul in 1932, the ships original engine was replaced by a Winston diesel.

Gustav A. Lange, a resident of Bay Ridge, was the lightships master from 1910 to 1932. On September 14, 1914, while Captain Lange was on shore, a tug pulled alongside the lightship and dropped off a package of newspapers and mail intended for the Essex, a British warship. Later that day, a boat from the Essex came by and picked up the package. Although the United States would not enter the war until three years later, Britain was already involved in what later became known as World War I. When Lange reported the incident to his superiors, he was informed that such actions could be considered a breach of the nations neutrality and no materials should be accepted from or delivered to any foreign war vessels again.

Lightships were always especially vulnerable to weather and collisions with other ships. Entries in the log of the Ambrose Lightship usually consisted of mundane notes about weather conditions, but on February 20, 1927, Capt. Lange wrote, Snowy NE gales with hail and snow. The winds reached force 9 (48-56 mph), with the ship rolling wildly in the waves. At 10:30 am, seas broke over mid-ship. A lot of the equipment was lost overboard, and the ship broke from its mooring and started drifting in the rough seas. The captain started the engines and took the ship into the Lighthouse Depot at Staten Island. A week later, the ship returned to its post in calm seas.

In 1932, WAL 512 was re-designated as a relief lightship. After four years in that role, it was reassigned as Scotland Lightship. That lightship station was located about two-and-a-half miles east-southeast of the Sandy Hook Light and one-half mile southwest of the southern black buoy at the Outer Bar. In 1866, the steamer Scotland collided with the schooner Kate Dyer about ten miles southwest of the Fire Island Lighthouse. The schooner sank almost immediately; the Scotland picked up the survivors and headed for shore, but its bow was damaged and it began taking on water. The captain ran the ship aground on the Outer Middle sandbar, but within a few days, the ship was almost totally underwater and barely visible to ships in the vicinity. Beginning in 1868, a lightship named the Wreck of Scotland Lightship was stationed at the spot.

Two years later, when the sunken steamer was moved to deeper waters, the lightship was removed. But mariners had grown used to its presence at the site and demanded its return, and in 1874 LV 23 was stationed there. Various other lightships were anchored there over the years, with the final one being WAL 512, which remained on station until 1963.

The replacement for WAL 512 at the Ambrose station was LV 111/WAL 533, which came from a discontinued station at Northeast End in New Jersey. The diesel-powered WAL 533, with five officers and ten crewmembers aboard, was 132 feet long and had been built in 1926.

On September 21, 1938, one of the centurys worst hurricanes hit New England, causing loss of life and damage to a number of lighthouses in the region. Ambrose Lightship was in an extremely vulnerable position. At 8 a.m. that day, the wind was blowing at force 3, and the barometer was falling rapidly. At 10 a.m., the tender Spruce delivered mail and provisions as usual, ignoring the winds that were up to force 5. The lightships captain ordered all equipment and boats on deck secured, and the crew went below to wait out the storm. By 2 p.m., the winds were force 9 and the barometric pressure was 28.66. When the winds reached force 11 (65-75 mph), the captain wrote in the ships log, Full storm forces with heavy rains. Vessel riding storm very easily. WAL 533 somehow managed to come out of the hurricane with no major damage.

The lightship remained on duty throughout World War II. German U-boats never bothered the ship, probably since it helped them navigate the waters in the area. However, on January 3, 1944, the nearby destroyer USS Turner was hit by two torpedoes, which in turn exploded the warships magazines and sank the vessel in sixty feet of water.

In 1952, after twenty years at the station, WAL 533 was replaced by a relief ship. Having been through the 1938 hurricane, World War II, and several rammings, WAL 533 was thoroughly refurbished before it was reassigned to Portland, Maine, where it remained until 1969.

The permanent replacement at the Ambrose station was WLV 613, which was brand new at the time. It was 126 feet long, and its diesel engine had a top speed of 10.5 knots. Two 375mm electric lenses were mounted on the foremast, with a twin diaphone fog signal aft of the pilothouse. A relief lightship, serving on the station for WLV 613 in June 1960, was rammed by the freighter Green Bay at 4 a.m. one morning. The lightship received a twelve-foot gash in its starboard midsection, and the crew had just a few minutes to scramble aboard an inflatable raft and paddle away with their hands to escape the vortex caused by the sinking lightship. The vessel was a popular dive spot for many years, but a buildup of silt has degraded the site.

In 1967, a skeleton tower replaced the WLV 613. This Texas-style platform reached ninety feet above the water, and its four supporting legs were driven 190 feet into the sea bottom. Its flashing white light could be seen for twenty-four miles. Four coastguardsmen were stationed aboard the tower until it was automated in 1988.

The new tower sites in 74 feet of water at the entrance to New York Harbor approximately 7 miles east of Sandy Hook, N.J. The superstructure is painted red with the exception of the radiobeacon antenna, which is painted according to FAA requirements. The quarters in the upper deck are painted white; below that the structure is black.

The main beacon, which has a focal plane of about 136 feet above water, operated at a high intensity of six million candlepower and at a lot intensity of 600,000 candlepower. It has a visibility of 18 miles.

In 1996, the Aegeo, a Bahamian-registered oil tanker, struck Ambrose Tower on a crystal clear night. Although the tower was not operational that evening, the captain of the tanker was found at fault. Damaged beyond repair, the tower was removed in 1999 and replaced by a three-legged tower positioned 1.5 miles from the old site where it would presumably be safe from further collisions. Such was not the case, as the 492-foot Kouros V plowed into the tower in January 2001. The ships owners were required to post a $3 million dollar bond to repair the tower.

The first Ambrose Lightship, WAL 512, is now docked at the South Street Seaport Museum in New York City. In January 2012, the lightship sailed over to Staten Island where it was dry docked for the first time in twenty-three years. The vessel received several layers of epoxy paint below the water line and a new coat of Signal Red paint above the water line before returning to the museum in early March.

Located at the South Street Seaport Museum near the intersection of Fulton and South Streets in Lower Manhattan.
Latitude: 40.70533, Longitude: -74.00243

For a larger map of Lightship Ambrose LV 87/WAL 512 Lighthouse, click the lighthouse in the above map.