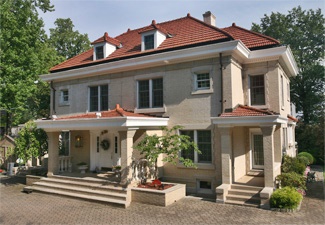 Plans and specifications for the nearby keepers dwelling were drawn up in 1910, and by July 1911, twenty-five percent of the residence was finished. The light was finally put into operation on April 15, 1912, when all work at the station had been completed except for grading, laying the sidewalks, and installing a lightning rod atop the tower. This additional work was not completed until 1915, and the total cost of the station came to $73,972.64.

On the day the light was to go into service, a local paper carried the following announcement: Tonight, for the first time a great white ray of 300,000 candlepower will bore a hole through the gloom seaward from the new 100-foot tower on the hill at Richmond, Staten Island.

The stately, architecturally pleasing tower looks more like something you would expect to see on an isolated, low-lying coast rather than atop a hill in New Yorks harbor. When Staten Island Lighthouse went into operation in 1912, the New York Times wrote that it was destined to take its place among famous beacons of the world, such as Eddystone Lighthouse, on the Eddystone Rocks, about fourteen miles from Plymouth, England.

The Lighthouse Service provided the following description of the lighthouse in 1912:

Purpose.Staten Island Light Station, N. Y., with West Bank as the front light, forms a range for guiding vessels through the outer arm of Ambrose Channel, entrance to New York Harbor, and went into commission April 15, 1912.

Site.The station is located on high land at Richmond, Staten Island, N. Y., 145 feet above mean high water, and the reservation contains about 0.9 of an acre.

Structure.The lighthouse consists of an octagonal brick tower, with rusticated stone base and stone trimmings resting upon a concrete foundation extending 7 feet below grade line, and surmounted with a brick watch room and a first-order, vertical-bar, cast-iron lantern, whose focal plane is 86 feet above grade line. The tower is pyramidal in shape, and incloses a cylindrical brick stair well, which is connected with the outer pyramidal walls by radial and horizontal bonding walls up to about the height of the fifth floor, where the two portions of the tower unite to form one structure. The interior of the stair well up to and including the watch-room floor is provided with seven cast-iron floors or landings and six flights of stairs. The watch-room floor is on a level with the main gallery outside, the latter being supported by ornamental cast-iron brackets. A hollow cast-iron newel post extends from the first to the seventh floor.

Illuminating apparatus.This consists of a second-order range lens of one panel, made up of 6 refracting and 7 reflecting prisms, reenforced by a mirror of 9 totally reflecting prisms, and giving a fixed white light in range with West Bank. The light is furnished by a 55-millimeter, double-tank, incandescent oil vapor lamp. The intensity of the beam is rated at 300,000 candlepower, the focal plane of the light is 231 feet above mean high water, and the light is visible 21 nautical miles in clear weather. The mineral oil is stored in tanks in an isolated vault at the foot of the tower and raised to the watch room by a suitable pump.

Quarters.There is a brick double dwelling providing quarters for two keepers; the two sides are alike and each complete in itself. In the cellars are bins for coal and vegetables. The first floor is provided with an entrance hall, sitting room, dining room, and kitchen, with pantry; the second floor with three bedrooms, closets, and bathroom; and the attic, unfinished, is lighted by dormer windows. Vitrified brick, with trimmings of stone to agree with those in tower, are used for the exterior of the dwelling. Both the north and south sides are provided with porches, and the roofs are constructed of terra-cotta tile on roof boards nailed to wooden rafters.

In 1992, after a series of Coast Guard budget cuts, Joe Esposito asked the Coast Guard about the possibility of becoming caretaker of the light. The generous offer was accepted, and Esposito, a local resident, lighthouse enthusiast, historian, master electrician, carpenter, and mason, did everything around the station, from cutting the grass, explaining the stations history to visitors, and, of course, keeping the light going twenty-four hours a day.

In 2001, after nine years at the unpaid volunteer position, the then sixty-two-year-old Esposito was forced to step down due to medical problems. The Coast Guard recognized his service in a ceremony on April 18, 2001, during which Esposito was awarded a citation for his meritorious service. The Certificate of Merit stated that Espositos hard work on this proud remnant of Staten Island and Coast Guard history is sincerely appreciated and that Esposito had upheld the highest traditions of the United States Coast Guard.

Thanks to the hard and dedicated work of Esposito and other volunteers, the lighthouse is in good condition, inside and out. Esposito remarked, Every time I stepped in it, I was going back in time to 1912. Speaking of his retirement from the lighthouse, he told the New York Times, Im gonna miss her. Shes the only one like it in the world.

As a hobby, Esposito builds extremely detailed scale replicas of lighthouses. He spent three months building a three-foot, seven-inch model of Staten Island Lighthouse, which he has donated to the National Lighthouse Museum on Staten Island.

Although Staten Island Lighthouse never quite reached the heights predicted for it by the New York Times, it was declared a Historic Landmark by the city of New York in 1968. From New York Harbor today, only the top of the lighthouse remains visible above the surrounding houses and accompanying foliage. The automated light continues as an active aid to navigation to ships entering Ambrose Channel, and a second light has been mounted on the tower to serve as the rear range light for the Swash Channel. The keepers dwelling is now a private residence.

In 2019, the Coast Guard granted stewardship responsibilities for Staten Island Rear Range Lighthouse to the National Lighthouse Museum. Working with the Esposito family, the museum will take care of tower maintenance and the surrounding property. This new role for the museum, said Linda Dianto, exectuive director of the National Lighthouse Museum, will not only allow for us to demonstrate best practices in caring for these national treasures, but will also serve as a shining example of the importance of ensuring their continuation as both nostalgic reminders of our past as well as functional beacons in the navigational arena today.

For a larger map of Staten Island Range Lighthouse, click the lighthouse in the above map.

From Interstate 278 on Staten Island, go south on Richmond Avenue 2.0 miles and then turn left on Richmond Hill Road. Follow this road for 1.5 miles through La Tourette Park and turn left onto Richmond Road. Take your next left, which is Lighthouse Avenue, and proceed up the hill to Edinboro Road. Turn left on Edinboro Road, and the lighthouse will be on your left after about 0.2 miles.