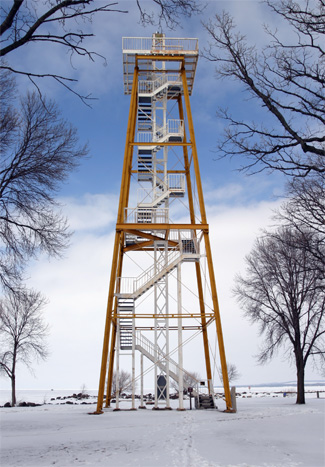 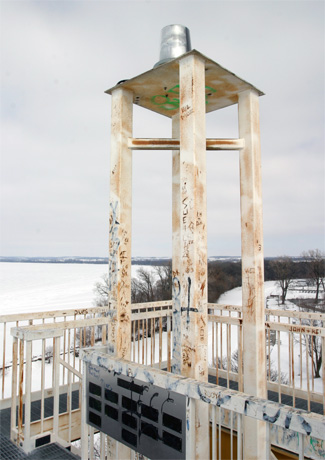 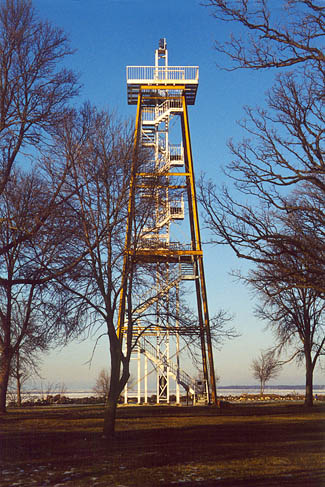 A Menominee Indian village whose name meant peace pipe was once located on the eastern shore of Lake Winnebago. When white settlers arrived in the area, they named the county Calumet, a French term for an Indian peace pipe, and selected "We Extend the Calumet to All Mankind" as the county's official slogan. Keeping with the area's theme, it is presumed that the town of Pipe in Calumet County also refers to the peace pipe.

An early surveyor noted that the "stream entering [the lake] at Pipe Village, though small and barred at the mouth, is nevertheless large enough for a harbor for boats; and a small pier at the mouth would deepen the water so that it might be entered." The surveyor's vision became reality when small Calumet Harbor was later established near the mouth of Pipe Creek.

The seventy-five-foot light tower that currently marks the entrance to Pipe Creek from Lake Winnebago was originally built as a water tower for the Fond du Lac Table Factory. In 1936, the tower was moved to Calumet Harbor where it began its second life as an observation tower and navigational aid.

By the early 1980s, the towers wooden staircase and observation decks had deteriorated to the point where they had to be removed. In 1992, through the joint effort of the Columbia Park Tower Fund and Fond du Lac County, the tower was restored and opened once more for climbing. Metal plaques are found by each stair, landing, and observation deck, recognizing a person or group who contributed funds for the tower. Over $53,000 was raised from the community, while the county contributed $45,000.

For a larger map of Calumet Harbor Lighthouse, click the lighthouse in the above map.

From Highway 151 in Pipe, turn west on County Highway W and follow it to the lake, where you will see the modern light in Columbia Park.


All the steps and observation decks are constructed from steel grating, which makes the tower quite durable. However, if you have any issues with height, you might want to think twice before climbing the tower as the clear view of the ground through the holes in the grating can be a bit unnerving, especially while descending the stairs. Near the entrance to the towers stairs a sign invites all climbers to "Give thanks for the gift of your life, as you enjoy the beauty here of all life around you." A visiting journalist noted that enjoying the beauty would have been easier to do but for all the pea-brained cretins who can't climb a tower without scratching or scrawling their stupid initials and eternal love for someone who probably isn't faithful to them anyway And they're terrible spellers.