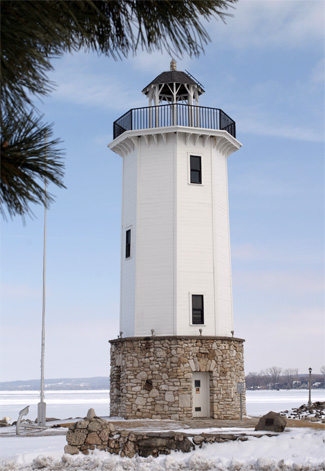 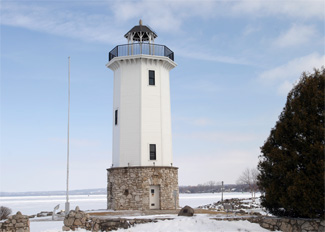 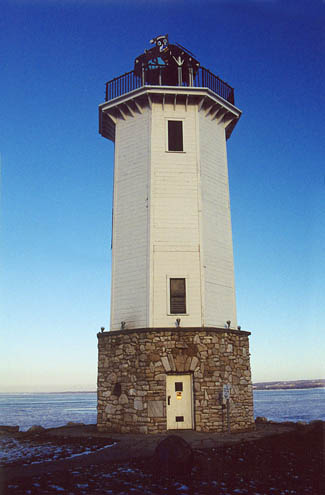 Fond du Lac Lighthouse, located at the southern end of Lake Winnebago, has become the symbol of the surrounding city, much like the Statue of Liberty represents New York City and the Golden Gate Bridge is linked to San Francisco. As you travel the streets of Fond du Lac, the image of the lighthouse is readily seen on bridges, road signs, and advertising. The communitys affinity for the lighthouse is perhaps because the beacon was built and lit during one of the citys darkest periods.

In 1932, lumberman W. J. Nuss generously offered to build a lighthouse in Lakeside Park using plans donated by noted architect Roger A. Sutherland. The offer was quickly accepted by the park board, and work on the forty-foot tower started the following May. At this time, the country was suffering through the depths of the Great Depression. Unemployment peaked at 24.9% in 1933, spreading a cloud of gloom across the nation. Charitably, the laborers employed on the lighthouse project were all out-of-work Fund du Lac citizens. The lighthouse was built at no cost to the city, with A.J. Rosenthal, Pierce Pereell, E.A. Becker, W.H. Manoske, H.B. Rossner, and A.R. Reiser all donating to the project. The local yacht club purchased a $200 beacon for the lantern room to guide mariners in and out of the harbor.

The bottom ten feet of the eight-sided lighthouse consists of a flagstone-covered base, while the upper section of the tower is of frame construction.

The laying of the cornerstone for the lighthouse on July 10, 1933 was a big even for the community, with several hundred people attending the ceremonies. Mayor Albert J. Rosenthal and Judge Heineman both spoke to the crowd from a flag-draped platform, and then Rosenthal, assisted by members of the park board, laid the cornerstone.

Frank Russell, superintendent of the park department, oversaw the construction of the lighthouse. The top flight of stairs was finished in October 1933, and shortly thereafter the lighthouse was completed.

By 1965, the lighthouse had fallen into disrepair, and the city hired Waryzn Engineering and Service Co., a consulting firm from Madison, Wisconsin, to examine the structure. Commenting on the condition of the lighthouse at that time, Carl Jacobs, park superintendent, said, The first two floors are weakened. Plywood was put over the floors but whether that is the answer, I dont know. The top deck is not good. It may all have to be replaced. The railing is loose and would have to be replaced or repaired.

After the lighthouse was restored, a celebration was held on July 3, 1968. A plaque on a stone near the lighthouse reads: Saved 1967, Restored 1993. Fond du Lac Evening Optimist Club.

A wooden staircase, attached to the interior walls of the lighthouse, winds up through the tower permitting visitors to reach the observation deck, where an excellent view of Lakeside Park and Lake Winnebago is afforded.

For a larger map of Fond du Lac Lighthouse, click the lighthouse in the above map.

At the junction of Highways 45 and 151 in Fond du Lac, turn north on Main Street and continue into Lakeside Park. When the road tees, turn right on Promen Drive and follow it to Park Drive, which is a short loop that passes by Fond du Lac Lighthouse. The lighthouse is usually open from Memorial Day to Labor Day.

The lighthouse is owned by the City of Fond du Lac. Grounds open, tower open in season.